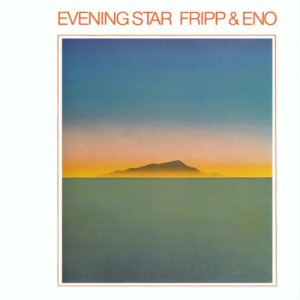 Evening Star is the second album guitarist Robert Fripp and keyboardist Brian Eno recorded together. In this and the duo’s previous release, No Pussyfooting, we hear the further development of Eno’s ambient music, which would play a much bigger role in his future recordings.  Fripp would follow a similar path, often breaking away from the thorny arrangements of King Crimson and into his self-created aural world of Frippertronics.

The five instrumental pieces comprising Evening Star are mesmerizing landscapes of sound built from the slightest strands of musical DNA. Minimalism, ambient and New Age are tags that come to mind listening to these compositions. I hear the tracks as tone poems; for me, the music reflects or evokes the subject of the song name. They are thoughtfully conceived and magnificently realized. The mood of the album is also perfectly reflected by the cover art courtesy of Peter Schmidt.

Side 1 contains four works: “Wind on Water,” “Evening Star,” “Evensong” and “Wind on Wind.” Each is a meditative study with Fripp and Eno playing over and manipulating tape loops, adding subtle sound colorings as the music unfolds. The title track is my favorite. A six-note pattern repeats in hypnotic rhythm before Fripp pierces the reverie with the buzzing of his heavily distorted guitar. The buzzing spins into a gorgeous melody that twists upward like a root breaking the soil’s surface and arcing toward the sun.

Side 2 is occupied entirely by the 28-plus-minute work, “An Index of Metals.” Less pastoral than its Side 1 siblings, “Index” incorporates an evolving guitar loop that becomes progressively more aggressive in tone and texture. Lines blur between melody, rhythm and time. Somehow, the music convincingly conveys the essence of a shimmering metallic substance being slowly transformed again and again by aural cold welding into something similar but new.

Existing on a metaphysical plane of its own, this landmark recording deserves a spot in your collection.