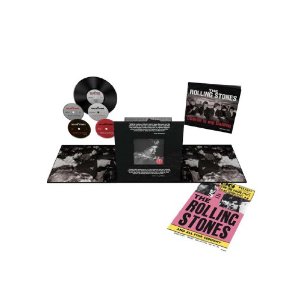 The Rolling Stones – Charlie Is My Darling box set

Amidst the hoopla surrounding the 50th anniversary of the existence of The Rolling Stones, with a new best of set and celebration tour, a very fascinating box set was released with minor fanfare.  Charlie Is My Darling, a film by Peter Whitehead chronicling the Stones’ two-date, four-gig run in Ireland during September of 1965, is now available in an expanded version after being hidden from view for decades.  The box set, including both DVD and Blu-Ray versions of the original film, the director’s cut, and the producer’s (Andrew Loog Oldham) cut; a CD featuring Stones originals, interstitial music and dialogue from the film; a CD and 10-inch vinyl version of the Stones live in England in 1965; a spiffy, little book discussing the making of the film; a groovy replica poster announcing the Belfast dates; and a numbered, limited edition enlarged film cell (mine’s #54, Mick shaking his maracas), is probably one of the most endearing pieces of nostalgia that you’ll ever encounter concerning the band.

The legal, business and criminal reasons for the film’s absence will bore the pants off of you.  Yet painstaking restoration of the material was completed in 2012, allowing ABKCO (holder of the rights to the early Stones work) to cash in.  As a historical document, you won’t encounter anything else that shows the Stones as they were about to explode worldwide.  After all, “Satisfaction” had just been released in the summer of ’65, and the band, as well as the rest of the planet, hadn’t quite figured out if they were a flash in the pan or truly here to stay.  Each band member is interviewed at various times in the film, and they’re given an opportunity to discuss their goals and their opinion on the maelstrom building around them.  Heck, they’re still just kids!  And it’s no surprise that both drummer Charlie Watts (who doesn’t even consider himself a musician or someone creating original music) and bassist Bill Wyman (who feels like he woke up one day and was suddenly living his dream life as a professional musician) are as dumbfounded as non-fans regarding the band’s success.  They expected this Rolling Stones thing to go on for about a year or two. Director Peter Whitehead movingly captures the band in action on stage and kicking back in their hotel rooms while goofing on Elvis, Fats Domino, and The Beatles (Mick’s impression of the opening guitar buzz from “I Feel Fine” is rather memorable).  But his images of the cityscapes of Ireland and the ridiculous mobs of ravening fans are equally riveting.  Whitehead tries to show that the world is captivated by this unruly group of Brits, and the editing showing everyday people, who are obviously craning their necks to see what’s going on, helps prove his point.  When fans, including a 40-year old mother who wishes she could “start a little group” of her own, to the clergy member present at the gig (the screaming teenagers ruined his total enjoyment), to the wannabe rocker explaining why he grew his hair out (“Because I like long hair”, duh!) add their two cents, we see that this isn’t hype, but an actual phenomenon touching people in all walks of life.  And so it remains today.

If you’re looking for the music alone, there are easier and less expensive ways to acquire older Stones material.  You’ll buy Charlie Is My Darling because you want a glimpse into how the band was evolving.  It’s remarkable how Whitehead was able to display Brian Jones’ unspoken unease with where things were headed.  He’s very much the odd man out, which is rather strange since he’s the one that formed the band just a few years prior.  “Satisfaction,” and the power Jagger and Keith Richards now wielded due to their successful songwriting partnership, quickly made Jones’ goal of mastering American blues and R&B numbers irrelevant.  He never says this explicitly, but his eyes and physical proximity to the rest of the band tell the tale.  Further, the camaraderie of Jagger and Richards is evident, especially when Richards sits down to the piano and starts banging out ditties.  Jagger jumps right in and the duo are instantly creating something new and original.

While Richards has, hurtfully, been the butt of jokes over the years due to his excesses and lax appearance, he’s clearly shown to be the mastermind behind the band’s changing direction.  Funny, intelligent, charming, and entertaining, Richards is a joy to behold here.  Mick’s ego, which he admits to enhancing on stage, is also apparent.  But he’s not full of himself; he’s merely playing a character that’s partly based on a guy named Mick Jagger.  His dreams for the future are more coherent than those of Jones, and centered on the realities of the business side of the music business.  Thus Whitehead, like all great filmmakers, was able to capture a moment in time that predicted what was soon to come while using pure images and accompanying sound to tell a richer story.

The music?  Well, what’s not to like?  This is The Rolling Stones, gang!  They could play the covers, like “Little Red Rooster,” “I’m Moving On,” and “Everybody Needs Somebody To Love,” in their sleep by now.  But their delivery on these, as well as originals such as “Time Is On My Side” and “The Last Time,” display a band that’s both hungry and accomplished, while putting a shoulder to their characteristic garage grind.  And you can actually hear Keith’s harmony vocals quite clearly.  The man can sing!  His willingness to add rhythm or lead guitar lines as is necessary, and either the main vocal part on a song’s chorus or a high harmony to compliment Jagger proves his worth repeatedly.

Classic Rock Music Blog gives Charlie Is My Darling our highest recommendation.  It’s not an item for the casual fan to seek out, but it’s something for which devotees to the field of rock music history or The Rolling Stones in general will want to save their pennies.