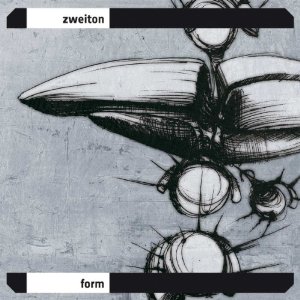 A gem that we’d regrettably overlooked here at classicrockmusicblog.com was released in May 2012 on the outstanding Unsung Records label.  Touch guitarist Alexander Dowerk and percussionist Alexis Paulus unite as Zweiton and they unleashed their debut album, Form, to the growing legion of fans of the U8 Touch Guitar.  The U8 allows Dowerk to employ not only traditional touch guitar tapping techniques, but also to deliver sounds via plucking, strumming, and slapping for a full range of guitar and bass textures.  Zweiton is nurtured by fellow touch guitar aficionados Adrian Benavides and Markus Reuter, who teamed up for mixing and production duties on the album.  Both Dowerk and Paulus also enjoy the use of electronics and programming when broadening their sound, allowing them to record instrumental compositions with a distinctive, dark, mechanized precision.

The six songs included on Form, averaging over seven minutes in length, each head off in different directions and avoid the trap to which the music of similar combos falls prey.  The tunes, therefore, have singular identities, amazing the listener in different ways from track to track.  This is evident within the first few seconds of opening track, “Sand.”  At just over two minutes in length, it’s easily the shortest cut on the CD, but it reveals its own intriguing elements without procrastination.  Emerging as a noodly, Pink Floyd-styled piece, it’s quickly transformed with the introduction of gongs, metallic guitars, and thunderous drums.  In stark contrast, the beginning of Track 2, “Triebwerk,” displays an abrupt about face in its intertwining guitar lines, complex polyrhythms, and surging bass guitar counter-melody.  Dowerk’s U8 allows him to show off his Tony Levin influence in the bass line on a piece very reminiscent of early ‘80s, twin-guitar King Crimson.  It’s bright and buoyant, yet has this evil genius menace lurking just beneath the waves.

“ 9 Days Of Tripping” (video below) expands on “Triebwerk”’s direction by playing up the creep factor with wobbly, squiggly background noises that, at times, duplicate the work of a fine, scratching turntablist.  Over its 10 and a half minutes, the emotions build, while dropping back at times for jazzier interludes and near Isaac Hayes/Gordon Parks moments sans the blaxploitation.  Inch by inch, “Tripping” moves into Nine Inch Nails territory, dropping heavily distorted guitars, somber reflection, and explosive drums as necessary.  Two cuts later, “Fehlfunktion” maneuvers through what could be the soundtrack to the prelude and white-knuckle main event of a cinematic car chase.  Paulus’ rhythms are either straight-forward with a funky backbeat, or purposefully derailed to throw us off course, but we’re never truly prepared to anticipate where the song will head next.

Closing with “Licht,” the duo invite co-conspirators along to play tuba and acoustic guitar.  The cascading melody of Dowerk’s guitar line will stay with you long after the CD has ended.  Dowerk and Paulus are really in lockstep as the drum and bass sounds anchor the piece beneath clever explorations.  Time signatures are selected and then disposed of measures later in what sounds like a gigantic, malfunctioning clock.  At no time does Zweiton’s music aim over the heads of the listener, however.  The songs are by intelligent design, but delivered for mass appeal.

Unsung Records has been consistently releasing thought-provoking material, largely under the direction of Markus Reuter, as it seeks new outlets for the array of sounds capable through the touch guitar.  With the discovery of Dowerk and Zweiton, it’s easy to see his reasoning for such devotion to the instrument and its proponents.  The sky’s really the limit for the U8 and its cousins and we’ve just begun to splinter our bows on the tip of this musical iceberg.  Reuter knows he’s dabbling in the future of music and he’s blazing a trail for what he believes will be de rigueur down the road.  With releases as remarkable as Form for evidence, it’s difficult to dispute his opinion.