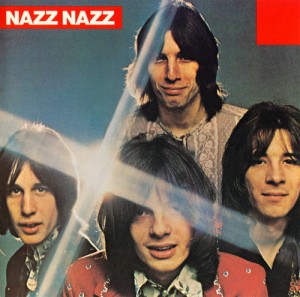 When I was in high school, an acquaintance of mine “found God” and decided that all of his rock and roll records needed to be disposed of so as not to corrupt him from his new path in life.  Many of the albums that he now offered up for sale (apparently earning money from selling the evil music would not corrupt him) were by artists with which I only had a low level of familiarity.  One of these artists was the ridiculously talented Todd Rundgren, and I managed to add a large chunk of the Bearsville Records releases of both the Rundgren solo and early Utopia catalog to my collection.  That purchase changed my life, but we’ll see how it affects me in the afterlife.

The next several years found me scouring used record bins to add even more Rundgren and Utopia albums to my stack.  Yet it wasn’t until I was in my 40s that I’d discovered Rundgren’s first recording unit, Nazz.  Now, Rundgren has never been ashamed of the Beatles’ influence on his own material.  But Nazz, operating out of Philadelphia in the late ‘60s, were contemporaries of The Beatles and it’s fascinating to hear how quickly The Beatles were setting standards for recordings by pop and rock acts immediately after the LIverpudlians churned out a new release.  Nazz can be said to reflect a variety of influences from British rock bands of the period – The Yardbirds and Cream chief among them.  But Rundgren’s Beatle-isms at times seem to anticipate what the mop tops were cooking up across the pond.  Let’s take a closer listen to the album that’s considered by many to be Nazz’s pinnacle, their second album, 1969’s Nazz Nazz for some examples.

What’s most remarkable about Nazz Nazz is that it’s self-produced by the group.  Guitarist/vocalist Rundgren, bassist Carson Van Osten, drummer Thom Mooney, and keyboardist/vocalist Robert “Stewkey” Antoni were signed to the tiny, regional SGC Records and were given a great degree of freedom in that contract.  Assisting in the transformation from garage rockers to psychedelic composers was Rundgren’s own study of music.  He’d taught himself to read music following the release of the band’s debut album, and, like fellow self-taught musician Frank Zappa, Rundgren’s ideas began to explode while in a studio setting.  Nazz Nazz was originally conceived as a double album, but the band staged a revolt against Rundgren’s piano-based ballads (a la Laura Nyro), which not only led to the record being scaled back to a single album, but also foreshadowed Rundgren’s departure from the group.

Nazz Nazz consists of eleven songs, most of which are pop-rock and are at about three minutes in duration.  The studio experimentation leads the way on the album’s (I own the 1990 CD reissue on Rhino Records) opener, “Forget All About It.”  Before the band kicks in, there’s a sound that’s somewhere between a jet flying in the distance and a mallet roll on a crash cymbal.  Mooney’s drumming is quite excellent and is accompanied by chimes during the song’s set-up.  Once the tune is rolling, we’re treated to a buzzing jangle of guitars and beautiful falsetto vocals from Stewkey.  Rungren’s guitar solo is majestic and the song takes many different paths across its short length.  This is power pop before the sound even had a name and the Beatles’ influence is writ large.

A somewhat notorious song is included in this collection: “Meridian Leeward,” with lyrics about a pig that’s been transformed into a human.  This isn’t sci-fi, but more of an Animal Farm-type of social commentary that’s more tongue in cheek than damning.  Derided as being some sort of hippie rainbow fart, the song is actually much more complex than is first evident.  Stewkey again handles lead vocals and concentrates on organ instead of piano.  Mooney’s complicated polyrhythms are not what you’d expect to hear behind a pop song, and the band does get into some odd tape manipulation on the vocal tracks, but this song is utterly listenable.  As Meridian zooms off in his big jet plane, Rungren again employs that bizarre jet engine sound and then blasts straight into the guitar-drum workout, “Under The Ice.”  Mooney is again devastating as he stretches out across the entire kit while demonstrating the fine art of the drum roll.

Mr. Rundgren gets all fancy on “Kiddie Boy,” an uptempo jazz-blues number with a killer horn chart.  Stewkey’s singing this one too, but Todd’s desire to show everyone the skills he’d recently taught himself, and his blazing guitar lines, steal the show.  He pulls out another new trick on “Letters Don’t Count” when he opens the song with glass harmonica (wine glasses filled with liquid to different levels).  Mooney steps away from the drum set here and shifts to congas.  The song is really an elaborate vocal arrangement with heart-rending chord changes and restrained guitar.

While Rundgren did a fantastic job of keeping everything fresh by using his new songwriting disciplines throughout all of Nazz Nazz, he truly outdoes himself on the record’s closer, “A Beautiful Song.”  This 11-minute suite is a test of the theories of Nietzsche, except it both killed the band AND made them stronger.  I’d love to see an accounting of the amount of studio time logged for this song alone, with its gorgeous piano, lush vocal layering, and confident string arrangement.  It’s an epic that sticks out like Taylor Swift at a Motorhead show amongst the rest of the radio-ready cuts.  Rundgren would return to the lengthier pieces on recordings such as his Initiation (where his “Treatise On Cosmic Fire” sprawls across an entire 30-minute album side) and frequently in the early years with Utopia (“The Icon” and “Singring And The Glass Guitar” come to mind).  It’s a helluva way to end an album and announce his embarking on a solo career.

So there you go – Nazz Nazz is the place to start for anyone wanting to explore Todd Rundgren’s earliest moments in his career and for one of the best examples of what happens to a garage band once they get serious and study the science behind composition.  The record’s flaws are also its selling points, something which is all but unheard of during this digital age of perfection.  While it’s not totally heavenly, Nazz Nazz does provide listeners with devilishly good fun.  Sinners beware!

One thought on “Nazz – Nazz Nazz”