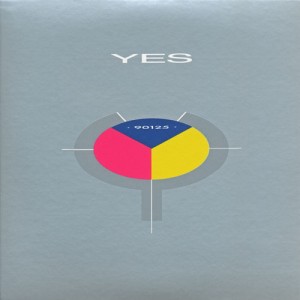 In the early 1980s I spent a lot of time listening to Yes, poring through the band’s entire back studio catalog along with any live recordings I could find. If I wasn’t listening to the six LP sides of Yessongs at my friend Chuck Wood’s house, I was likely trying to learn Bill Bruford’s drum parts from “Heart of the Sunrise” or was falling asleep with my trusty Koss headphones wrapped around my head as Tales from Topographic Oceans played in my ears. Yes became one of my favorite bands, so when they were apart during this time I kept hoping for a reunion of some sort. Then rumors started flying that bassist Chris Squire and drummer Alan White were working on a new project called Cinema. There was talk that Jimmy Page might be in the mix, too, with a possible band name of XYZ (ex-Yes/Zeppelin). Whatever was to be, I just wanted Yes—or some musical semblance of Yes—to return and start recording songs again.

I got my wish in 1983, when the lineup of Squire, White, vocalist Jon Anderson, original keyboardist Tony Kaye and guitarist/vocalist Trevor Rabin released 90125, the band’s first new studio album in three years. That might not seem like a long time, but the future of the band was ever doubtful and time was marching on. Progressive rock’s heyday had past, replaced by MTV, hair metal, new wave and new technology. And the “new” Yes reflected the times. The long flowing guitar and keyboard lines and frequent time and key shifts that characterized the band’s music in the 1970s are largely replaced by straight-ahead rock rhythms and stricter adherence to verse/chorus/verse/bridge/chorus songwriting. Gone also are the multi-part suites that often filled an entire album side; in fact, there are no songs longer than 8 minutes on 90125. The technology of the day makes a firm entry, with frequent use of triggered sound samples, whether from White’s drum kit, Rabin’s guitar effects pedals or Kaye’s keyboards. And the album artwork has zero association with previous Yes albums.  Instead of the beautiful and mysterious fantasy imaginings of artist Roger Dean, we get a tricolored “pie chart.” It’s nothing to hang on the wall, but it’s what’s inside that counts.

Several songs from 90125 received substantial radio airplay, with “Owner of a Lonely Heart” getting the lion’s share. This was the first song I heard off 90125, and it sounded very different. Rabin brought a modern sensibility and approach to guitar playing and songwriting, much of it revolving around fixed song structures and sound manipulation. “Owner” is a prime example, being perhaps the most meat-and-potatoes rock song the band has released. The tune is powered by a basic three-chord riff and drumbeat with alternating accents on the hi-hats and bass drum. It’s as simple as it gets, yet it became the band’s signature song of the ‘80s. And Rabin spices the arrangement with a feedback-drenched solo that veers off into a sound world far outside the song’s melody as he plays on top of the rhythm, filling space with squawky noises and overtones.

“Leave It” opens unexpectedly to a cappella chorus, then proceeds to a brief vocal arrangement reminiscent of Bobby McFerrin before shifting into an understated verse. The chorus is then repeated and hammered home with heavily accented electronic drum beats. It’s anything but a typical pop-rock song but another 90125 track that garnered lots of airplay.

“Changes” is another standout track, with a moodier vibe and terrific vocal interplay between Rabin and Anderson. Anderson and Rabin’s voices work very well together—Jon singing sweetly as always and supplying the upper register, while Rabin provides a huskier “rock” sound— but Anderson is still the “voice” of Yes here. And his lyrical influence looms large. On the brisk “Our Song,” Anderson pronounces, “Toledo was just another good stop along the good king’s highway/My fortification took me by surprise and hit me sending me sideways/Spellbound, roundly, good for sunshine/Can’t help thinking .” It’s not Siddhartha, but it ain’t “My Sharona” either. This is probably the song that sounds most like late-70’s Yes and is one of my top three album cuts. The cinematic, street-tough “City of Love” is another.  Squire’s lumbering bass and Rabin’s twisting guitar lines pack a wallop, enhancing the charged atmosphere created by Kaye’s synths.

90125 finishes on a very high note, with the beautiful ballad “Hearts.” The track is sprinkled with Far Eastern keyboard flourishes that melt into a chorus of pure melody. I particularly like White’s drumming; his perfect touch on fills heightens the anticipation of each chorus. And Anderson delivers a gorgeous coda that rivals the closing moments from “Awaken.”

Yes guitarist Steve Howe has commented that the Yes music of the 1970s was characterized by melody, while the band’s 1980’s output was driven more by rhythm. That’s a fair assessment, although 90125 has an excellent balance of both. Revisiting this album 30 years after its release I understand why it was so successful commercially. And I like it very much still. The mercurial nature of Yes meant that this lineup would eventually split, but not before becoming firmly entrenched again in the public eye and ear.  For critics of the band’s perceived previous musical “excesses,” 90125 must have seemed like a dream. For others, like me, who waited years for a reunion, it was also a dream of sorts. I’m glad I was there and wide awake.