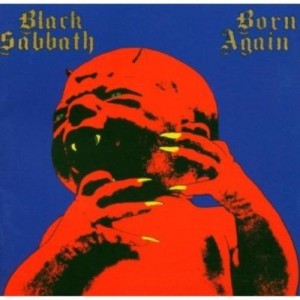 Could an album’s artwork alone make you not want to listen to the music inside? Before answering, let me present Born Again, the 1983 release from Black Sabbath. Sporting one of the most garish record covers in rock history—a red, screaming baby with horns, yellow fangs and talon-like fingernails, set against a purple background— it’s easy to look at the Born Again cover and say, “This isn’t for me.” Or, as the album’s vocalist Ian Gillan was reputed to say when he first saw the artwork, “I puked!” But not so fast…

Born Again occupies an interesting space in the Sabbath timeline. After a pair of excellent platters (Heaven and Hell and The Mob Rules) recorded with the-now-departed vocalist Ronnie James Dio, the band would be soon heading into a virtual no-man’s land of lineup changes and shrinking record sales for the next decade. In many ways, Born Again was a last chance to keep Sabbath respectable and in the public eye and ear. So remaining band members Tony Iommi and Geezer Butler brought in two big guns:  Gillan of Deep Purple fame, who had been fronting his own band; and original Sabbath drummer Bill Ward, who had been absent from the band and The Mob Rules album as he struggled to stay sober.

The album was rehearsed and recorded at Richard Branson’s country estate in Oxfordshire, England. Imagine a bucolic community stood on end as one of the world’s loudest bands played their bludgeoning music down the road from pasturing cows and a vicarage. What would this new incarnation—this born again version—of Sabbath sound like?  Like the Sabbath of past there are plenty of heavy guitar riffs, thundering bass lines and a barrage of drums. Gillan’s voice is in amazing form and Ward plays with raw power. The songs have a more mainstream feel, but the record has a definite rawness partly because the music was written and recorded quickly and secondly because the final recorded mix is more muffled and denser than previous Sabbath releases. Depending on your taste this makes the metal either heavier or rusty.

The album opens with the turbocharged “Trashed,” a somewhat cautionary tale of a tequila-fueled Gillan racing and wrecking a car on the grounds of Branson’s estate. Iommi’s guitar and Butler’s bass drive the pulsing rhythm forward as Gillan recounts the inebriated evening that could have ended much worse. Lyrically, “Trashed” is a veering detour from the past Sabbath themes, whether with Ozzy or Dio; it’s pure Gillan, singing about wild boys doing wild things with no honest intention of stopping. It’s one of his best songs and an album highlight.

We get a quick “breather” in the form of “Stonehenge,” a quasi-ambient instrumental full of warbling keyboard effects that develops into a mysteriously moody but attractive melody. Then all hell breaks loose. “Disturbing The Priest” explodes off the vinyl, powered by a Ward drum roll, Gillan’s shrieking laughter and a dissonant riff that’s a bit like the guitar line from “Black Sabbath,” only twice as fast. The song moves by turns from startling intensity to a softer, steady shuffle. The closing seconds find Gillan screaming the song title with maniacal ferocity, stretching his lungs to the limit and hitting notes that defy logic and larynx. Even by Sabbath standards, “Disturbing The Priest” is a heavy track.

Gone are the days when Iommi would tuck a quiet acoustic guitar number into the album mix for some sonic levity; instead, a second gloomy instrumental, “The Dark,” is sandwiched between tracks 3 and 5. We get 45 seconds of something that sounds like humpback whales communicating with anvils. This leads directly into Side 1 closer “Zero The Hero,” a hypnotic hard-rocker that slowly spirals into an extended lead break, where Iommi delivers one of the finest guitar solos of his career.

“Digital Bitch” opens Side 2, and for my ears it is the album’s least successful tune. The chordal riff is spunky enough but has no real identifying character of its own, sounding like a generic 2nd-rate hair metal arrangement. And Gillan—an intelligent and witty lyricist—breaks no new ground here with his tale of a rich girl with an icy personality.  Maybe you’ll like it, but it’s the album’s one song I never connected with.

For the monstrously awesome title track Iommi down-tunes his guitar to subterranean levels, giving the strings a dark, murky tone that makes his rumbling arpeggios even more ominous. The music emerges as if from some primordial ooze, taking sludgy shape under Gillan’s brooding vocals. “Born Again” is probably the most Sabbath-like tune in theme and style on the album; strangely though, it’s hard to imagine anyone other than Gillan singing it. When Iommi’s towering power chords break in, announcing the chorus, Gillan follows with a howl that again defies reason—another example of his nearly uncontestable range. “Born Again” is beautiful, eerie and powerful—one of the best tunes in the Sabbath catalog, period.

Gillan’s influence is front-and-center in a good way on “Hot Line” and Side 2 closer “Keep It Warm.” Both songs have a more commercial feel, closer to Deep Purple than Sabbath.  “Keep It Warm” is the stronger of the two, with a catchy chorus and a cool bridge that changes tempo and mood before diving in for the final swim.

This Gillan-fronted Sabbath recorded one album only, so Born Again remains the lone studio document of this lineup. Deep Purple would soon call Gillan back into the fold, resulting in the highly successful Perfect Strangers album; Sabbath, meanwhile, would struggle to retain its identity for years to come. Born Again doesn’t reach the artistic heights of Sabotage under Ozzy’s tenure or Heaven and Hell under Dio’s, but it has its moments and is worth revisiting if you missed it the first time around, 30 years ago.