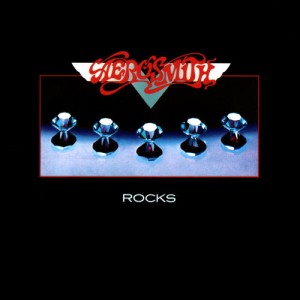 I remember first seeing Aerosmith’s Rocks album on an end-cap at a now long-defunct retail store in Dayton, Ohio, called Gold Circle. This was back when almost every store stocked LPs and many had a department dedicated to audio equipment.  And every time I look at the cover of Rocks it brings me back to that moment in Gold Circle, mesmerized by the simple but dazzling artwork:  A set of five highly polished and very large diamonds are arranged in a subtle V and set upon a mirrored surface, which reflects the image.

Diamonds are “rocks” but the title conveys multiple meanings. These songs are “diamonds”; Aerosmith “rocks”; a lot of “rocks” went into making the album. There is a gem-like perfection to Rocks, but its luster is a hazy, worn glaze more than brilliant luminosity—think of a stone bouncing around for 9 months in Lemmy’s bowling ball bag before being pulled out to admire. The guitar riffs are distinct and savage. Steven Tyler’s voice cuts blade-like through the arrangements, ragged, fierce and often threatening. The tunes are rough around the edges, held together by some cosmic glue that went off the shelves years ago.

Side 1/Song 1: “Back In The Saddle” opens with a foreboding Spaghetti-Western theme done Aerosmith style. Joe Perry and Brad Whitford build tension using dissonant two-note patterns while the clip-clop of horse hooves carries the mysterious rider into the picture, portending some dark event about to unfold. As Tyler’s voice finally emerges, with the wailing cry of “I’m baaaaaaaaaaaaaaaaaaaaaaack…,” the guitars shift into a sludgy back-and-forth riff that sounds like a no-win tug-of-war. Then another turn, as the song moves from the chorus into the first verse. Let’s recap: Aerosmith begin “Back In The Saddle” with the chorus instead of the verse. It worked with “Sweet Emotion” and it works again here.

Beyond “Back In The Saddle” and other album radio hit “Last Child,” are several of the band’s finest moments. The swagger of “Get The Lead Out,” the full-throttle assault of “Rats In The Cellar,” toxic tales of “Sick As A Dog” and the heavy-metal leaning “Nobody’s Fault,” paint a sonic picture of Aerosmith blossoming into America’s greatest rock-and-roll outfit of the mid-70s. If Get Your Wings served as appetizer and Toys In The Attic the first course, Rocks was surely the pièce de résistance—the whole roast ox, carved up gristle and all for a music-hungry crowd in 1976.

“Combination” is my favorite Aerosmith track ever. The spiraling guitar lines, crunchy rhythms and Tyler lyric showcase everything that was great about this band. Glamour and gutter mix freely here, with the song’s subject (read Tyler) dressed to the nines but wearied from the overuse of certain “substances” and barely able to stand. Hell, he even creates a rhyme to Yves Saint Laurent that makes sense. Even the album-closing ballad, “Home Tonight,” is at home here. If you need something sweeter, drink Irn-Bru.