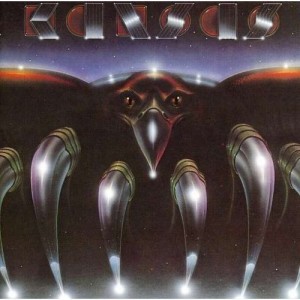 I finally did it!  Thirty-some years after I’d begun, I’ve now completed my collection of releases by the original recording line-up of Kansas.  With my acquisition of Two For The Show a few years ago (replacing my long lost 8-track version, Thanks, Todd!) and now, the one I’d never owned or even heard all the way through, 1975’s Song For America.  I don’t know how many of you have done this – dug up and bought an album by a band you’ve always loved, just to hear their older material – but it’s ten times better than Christmas and almost as cool as a new box set with previously unreleased recordings.  It’s not that I had anything against Kansas’ second album; it’s just that I was sort of sidetracked by life all these years and only recently decided to focus on holes in my collection.  Listening now, for the first time, it’s weirdly like connecting with a pen pal or online acquaintance that you’d never met in person (but you’d known his life story for ages).

So, just who are these Kansas whippersnappers, anyway?  To hear the tale, it sounds like a group of six sore thumbs sticking out in Topeka back in 1970.  There were line-up changes, and lots of crappy bar gigs, but the band eventually settled into a solid configuration consisting of drummer Phil Ehart, guitarist Rich Williams, guitarist/keyboardist Kerry Livgren, vocalist/keyboardist Steve Walsh, violinist/vocalist Robby Steinhardt, and bassist Dave Hope.  At the outset, they were solidly a progressive rock ensemble fashioned more along the lines of Yes or King Crimson than of the heartland conventions you might expect.  Their sheer musicianship allowed them to tour with The Kinks and Mott The Hoople and their cult grew by word of mouth.  There were no hits – at first – and they were thought of more as a “musicians’ band” than as rock-and-roll thrill-seekers.  Just check out early pictures of the guys!  Hello, 1970’s in the Midwest – all blue jeans, boots, belt buckles, bad hair, and…even more bad hair!

Enjoying the notice they’d been receiving following the issue of their debut album in 1974, they were hurried back into the studio late that year to record their sophomore collection, Song For America.  The songs were written on the fly, but were still given very careful attention by primary songwriters, Livgren and Walsh.  The lyrical content shifted between stories of the down and out, environmental concerns, and philosophical musings, which were constant themes throughout the band’s career.  And the music – the music! – is at times incredibly complex, yet is framed in an American sensibility found in blues and boogie-woogie that always seeps to the surface.  A classical influence is also strongly felt, largely due to the training of Steinhardt, and the instruments are often arranged as if they were participating in a mini-orchestra.  Walsh and Steinhardt’s vocal harmonies are multi-tracked to convey a feeling that the band is making use of a full choir.  Williams’ Dixie-fried guitar licks, contrasted by Livgren’s experiments with synthesizers, Walsh’s rich organ swirls, and the skills of one of rock history’s most incredible drummers in Ehart, Kansas’ sound has never been, and likely will never be, duplicated.

Blowing the doors off the hinges, America starts by hitting hard on “Down The Road”, a saga of a guy stuck a bit too deeply in the local drug trade and trying to find a way to get out.  Steinhardt’s gruff lead vocals make for a better fit than those of Walsh, but Walsh, who’d co-written the song with Livgren, drops a few lines of scat vocal (with good ol’ ‘70s handclaps, Ehart, Hope, and Steinhardt’s violin behind him) to great effect.  Livgren and Williams get busy on a guitar battle that would make K.K. Downing and Glen Tipton from Judas Priest flinch.  Although not a Billboard chart-topper, “Down The Road” was a rock radio hit that’s well remembered by fans that weren’t even alive when the record came out.  A live version, equally fiery, is tacked on as a bonus cut on the 2004 Sony Legacy CD reissue (the version I just bought).

More skeevy scenes are described in the Walsh/Hope/Williams/Ehart track, “Lonely Street.”  Walsh sings of a poor bastard who may as well stop looking for his way out unless he spies a handy file for the bars in front of him.  How he got there, dressed in a blues with stinging guitars, is presented through one of Walsh’s best deliveries of his career.  Dave Hope truly stands out on this cut, too.  He’s always been a sturdy bassist, but not all of Kansas’ recordings bring his instrument to the fore like on this record (Williams is especially fond of Hope’s performance and how it was captured here).

Things get trickier on the Walsh/Hope piece, “The Devil Game.”  The time signatures are changing and Ehart is going off the rails.  Walsh is singing about how the only one that can do anything to counter the influence of Satan (mentioned by name) is the one falling under the influence.  It’s a wordy hodgepodge of the fatalism vs. optimism approach more commonly taken with Livgren’s lyrics, especially after his and Hope’s conversion to Christianity later in their stint in the band.  The song is roughly half the length of the Livgren compositions, “Song For America,” “Lamplight Symphony” and “Incomudro—Hymn To The Atman” and covers nearly as much ground as any of them.

The title cut, which also sees a nearly useless, Don Kirshner-mixed “single edit” included as another bonus track, just feels like America in the 1970’s to me.  Livgren’s lyrics reflect on the fact that the United States is such a young country and we’re already turning it into a trash heap.  Before using other, more current, terms, the notion was “ecology”, and it was in my face throughout my youth as surely as an Indian will cry when you throw your garbage from your moving vehicle.  There was a peak of this attention occurring right around our Bicentennial in 1976, so Livgren was just slightly ahead of the masses in casting a stare towards the beaten environment.

If you’re looking for the wayward son to carry on, or smiling while squinting due to the particulate matter blowing past you, this ain’t your record.  But if your appetites are whetted by the brilliant performances on anything you’ve heard by Kansas on the radio, you need to seek out Song For America.  Considered by many to be their heaviest, “proggiest” record, it’s the kind of album that demands you lay back as you let it burrow into your cranium.  You don’t hear musicians cut loose like this anymore, well not on the radio stations playing new music anyway.  No prefabrication, no ulterior motives, and no fluff, Kansas were and are the real deal.  And I couldn’t be happier to now own everything released by this extremely original combo.