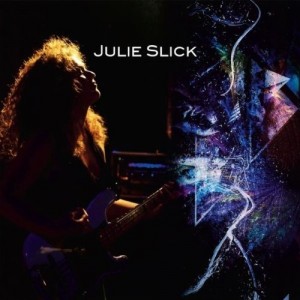 School of Rock alumnus and former member of Adrian Belew’s Power Trio, Julie Slick is a talent to behold.  I’ve always had a fondness for the bass guitar – probably much more than most music fans.  And while I’ve heard the distinctive sounds of such bass guitarists as Les Claypool, Tony Levin, Geddy Lee, Jack Bruce, Larry Graham, Bootsy Collins, and Geezer Butler as each of them has taken their instrument to levels unattained previously, Julie Slick has shown me that there are things yet to be done with a bass guitar that have not been attempted.  Julie just released her second solo album, Terroir this September, but I’m going back a couple of years to the CD that first introduced me to her music, her self-titled debut, to try to convert the rest of you as well.

Julie and her brother, drummer Eric (these days playing with the excellent Dr. Dog) were noticed by King Crimson guitarist/vocalist Adrian Belew as he was looking for a small combo that could reproduce his solo material, his work with Crimson, and his material recorded with Frank Zappa, in a live setting.  Thus the Adrian Belew Power Trio was formed, staying active from 2006 through 2009.  As other projects beckoned, ABPT went on hiatus and the Slick siblings’ opportunities rolled down like an avalanche.  Aside from occasional appearances with the ongoing King Crimson Projekt, Julie has joined such notable performers as Jon Anderson, Alice Cooper, Stewart Copeland, and Heart’s Ann Wilson to lend her flexible low end manipulation.  She’s also produced many bands from her native Pennsylvania to help get their careers off the ground.  All of this seems like a fine resume to one’s history in the music business, and many musicians would be happy to recall their participation in any one of these gigs.  But this list is going to get much, much longer.  Julie Slick is just 26 years old.

As all true musicians at some point branch out into composition, not feeling fully content to perform others’ material at all times, so it was with Julie.  She had amassed recordings of her own, which saw the light of day in 2010.  If you’re able to place the content of Julie Slick into one neat category then you’re a better person than me.  It’s not prog rock, though it rocks hard and sometimes verges on punk intensity and pushes boundaries while displaying quality musicianship like good prog does.  It’s not jazz, though it swings like a major league batter when it wants to.  It’s not completely experimental as each song has specificity that you won’t find in some artists’ laboratory exercises.  Songs are generally concise and range across the stylistic map like bison on The Great Plains before the advent of the locomotive engine – unrestrained and powerful as all hell!

While Julie is a bassist, she employs numerous affects to alter her sound, keeping things fresh from song to song.  She also recognizes where another instrumental voice is necessary and isn’t shy about recruiting some of her colleagues to flesh out the material.  There’s no singing, but I dare you to listen to the album and not have some of the tunes stuck in your head days afterwards.  The closest thing to vocals is in the background of her piece, “Mora,” where a woman with mental illness or some kind of head injury speaks of her travails much like the woman speaking on Pearl Jam’s “Hey Foxymophandlemama, That’s Me.”  Slick is joined here by the song’s co-author, Chapman Stick player Michael Bernier.  Bernier’s use of sampled sounds and guitar-like skronk with noodling noises similar to Zappa’s first uses of the Synclavier and violin tones is anchored by a machine-precision performance from Slick.  She carries the main “melody,” which consists of quickly alternating sixteenth- and quarter-note phrases.  “Mora” is perhaps the most “out there” cut on the CD.

Julie likes to sample Robert Fripp.  And why not?  Parts of his work, “Scanning II” serve as the base for Slick’s “Choke.”  This song is deployed using a hyper-fast techno beat and swirling, muffled and slowed human voice.  Slick uses her bass more to provide framework at first before she too is playing in unison with the break-neck rhythm.  In less than two minutes, we’re on to “Awoke” where Slick is joined by guitarist Alex Schmidt who strangles the air with devilish feedback and Eastern modality a la Steve Tibbetts when he’s plugged in.  Slick again holds the “melody”, consisting of a dizzying blur of chords (atypical of most bass parts from most bassists), extreme and penetrating low notes, and rapid-fire percussive tones.  It doesn’t sound like it from my description, but this is one of those melodies that are going to linger in your brain long after you’ve heard it.

“Spice Trade” samples two different Fripp songs, “Sometimes God Hides” and “2006” for a queasy, uneasy beginning and a spooky Mellotron layer mid-song.  Following Slick’s whole note anchors during the queasiness, she launches into one of her speediest deliveries on the album.  But the point isn’t to stay quick forever.  As Fripp’s cacophony rises, so does Slick’s.  And she’s soon flying all over the fret board like her life depended on it.  The song ends with a sole note from Slick that just about punches a hole in your chest.  The set-up on the following piece, “The Rivalry” (featuring brother Eric on VB-99 guitar!) could have come from a Gang Of Four or Dead Kennedy’s album.  It’s Julie alone running through the chord changes in rhythm and the sound is very heavy and fast.  When Eric and the rhythm track come in a few measures later, it’s like the best new wave music that you’d ever heard (sans posing keyboard player with too much make-up and two-foot high hairdo).  After three minutes that would make Missing Persons drool, it’s down to Julie accompanied by a whooshing rhythm that skitters along, dropping out here and there.  She alters her bass line’s rhythm to match, amazingly.

Though I haven’t heard Terroir yet, I’m anxious to see if Julie Slick is a fluke or just a taste of what Julie’s concocting.  My money’s on the latter.  For someone who’s developed her skills as quickly as Julie has, two years is a lot of time to pass between records.  What she’s learned in the meantime might just earn her a position at the top of many music fans’ “Best Bass Player Ever” lists.