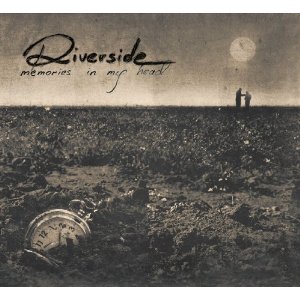 Riverside – Memories In My Head EP

Don’t you love it when a band releases an EP that’s actually longer than some other groups’ full albums?  Well, for Polish prog rock ensemble Riverside, 32 minutes won’t qualify as a long-player.  In celebration of their 10 year anniversary in 2011, they issued Memories In My Head on the label that got things going for them in the first place, The Lazer’s Edge.  If you’re not familiar with Riverside, you need to educate yourself quickly.  I’ve just done them a disservice by calling them a prog rock group, and other reviewers have been even more unkind by marginalizing them as a metal band.  Their sound is hard to sum up.  They’re a prog rock band if latter day Pink Floyd is one as well and they’re metal if Tool was only metal.  Their song’s lengths are what make us want to lump them in with other European proggers, but there’s something very unique about Riverside.  I’ll try to elaborate while describing Memories’ three songs, which average over 10 minutes each in duration.

Riverside first came to the attention of wider audiences while on support for Dream Theater in Europe.  Their cult has grown considerably since that time.  I first became aware of them upon hearing side project material by vocalist/bassist Mariusz Duda, recorded under the name Lunatic Soul.  While those outstanding recordings are purely solo creations, Duda collaborates with guitarist Piotr Grudzinski, drummer Piotr Kozieradski, and newcomer keyboardist Michal Lapaj in Riverside.  The band’s sound is expansive, seemingly much larger than the sum of its parts.  There’s a gloom and sadness that pervades their material.  Songs build slowly over their course.  While members occasionally step to the fore for solos, they’re not interested in creating a spotlighted wank fest.  Everything has a purpose and is part of a larger scheme.  The skills are there, but this isn’t about showing off for some groupie love afterwards.  Songs are crafted more as audible paintings or films.  Now you see where I’m going with the Pink Floyd references.  Remove David Gilmour‘s solos, lengthen the pieces, add even more darkness, and bring in a superior vocalist (sorry David and Roger, Mariusz has you both beat!), and you’ll start to understand Riverside’s music.

Memories In My Head’s three tracks are thematically linked, but this may not be obvious at first listen.  While the cuts flow directly into one another, like chapters in a well written novel, they do each have their own subjects and are merely cogs in a much bigger wheel.  Lead track, “Goodbye Sweet Innocence,” begins with ideas reminiscent of those found at the opening of Dark Side Of The Moon.  Duda’s voice isn’t heard until nearly three minutes into the song after a beautiful sonic construction mostly courtesy of Lapaj (and if his synthesizer flourishes aren’t a nod to “Any Colour You Like,” I’ll eat this keyboard).  There are stabs of blistering guitar tucked behind the shades and sturdy bass guitar adding low end as Lapaj builds new textures.  When Grudzinski finally pulls out his solo, using that lovely mix of Asian and European ideas that we hear more commonly from Eastern Europe than from The West, it’s only after Duda has signaled a shift to a more rigid and menacing track.

The lyrics, also courtesy of Duda, are the main element that ties the EP into a greater statement.  “Goodbye Sweet Innocence” explains that all endings are and must be beginnings as well.  Ask any physics student whether energy can be destroyed and you’ll also learn that it’s merely reconfigured and exists eternally.  Duda’s getting metaphysical on us, but he’s too clever to be heavy handed about it.  His tale of a cycle of regret and renewal is told slightly differently in “Living In The Past.”  Here the protagonist describes how much better things used to be.  While he knows it’s wrong to think this way, he tells us his “future is in the past.”  The two song’s lyrics are saying the same thing essentially.  Future-past, creation-destruction, happiness-sadness…they are the exact same thing.  It’s only as your perspective changes that each opposing concern shows itself to be different from the antithesis.  And if we pull this down for a tighter perspective for our own view, we see that the songs themselves are similar to one another, just heard differently as we listen more closely.  My mind is blown!

The musical shift in “Living In The Past” is towards the more aggressive.  Because Riverside can get heavy when they need to, they will be considered a metal band.  But as you can see, this isn’t a conglomeration of leather weasels complaining about how they’ve run out of drugs and cheap women.  There’s depth to everything they do – sonically, lyrically.  And they employ a subtlety that is lost on so many musicians these days.  By the time the song is at its peak volume, it’s been building so slowly and continually that it doesn’t feel heavy at all.  All props here to the careful interplay between Duda and Kozieradski.  There’s a moment when the surging rhythm of the piece just stops.  It’s only for about two seconds, but that coordination forces the listener to pay complete attention to everything that comes afterwards.  Lapaj and Grudzinski add filigree throughout, elevating the song to a masterpiece.

The EP closes with “Forgotten Land,” tying up all lyrical and musical streams into a cohesive close.  The discussion here regards a crumbled civilization, framing it both in the glory of the kingdom’s height of dominance and in the desolation of its vanished infrastructure and the dignity it once held in the thoughts of those that beheld it.  Here again, past and present, empire and wasteland, significance and absence, are contrasted purposefully to make a point other than the one the obvious lyrics illuminate.  The music takes a turn as well, staying consistent with the murk of the previous tracks, but offering occasional major key optimism.  I owe Lapaj a beer if I ever meet him, because I caught that his synthesizer sound again nods to Dark Side, this time “On The Run.”  It’s an inside joke between two music fans and I got it!  The least I can do in appreciation is purchase a malt beverage for him.  I don’t think I can single him out, however.  The entire band is exceptional on the last track.  Duda is using an echo effect on his voice that reminds me of Peter Murphy, Bauhaus or solo.  He’s also just beating the crap out of his bass while Lapaj and Grudzinski are bringing about the finish this troika demands.

Riverside is set to release a brand new full length album, Shrine Of New Generation Slaves, in 2013.  Use Memories In My Head to tide you over until then or as an introduction to this phenomenal group’s art.  I’m already a step ahead of you and am about to dig through their back catalog to see what else I’ve been missing.  I’ll let you know if there’s anything else worth remembering and you can take my reviews in your own perspective.