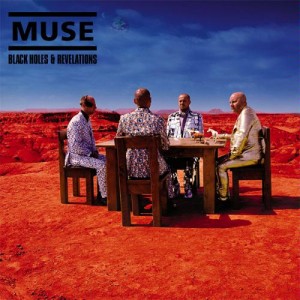 In our quest to discover rarities and overlooked masterpieces released by more traditional “classic rock” artists, we can sometimes neglect albums from modern artists culturing tomorrow’s classics.  One such group that should be on the radar of even the most diehard dinosaur rock fans is Muse.  While the band has just released their sixth album since 1999, The 2nd Law, I turn the clock back to the one that first grabbed my attention, their fourth, 2006’s Black Holes and Revelations.  A mishmash of sounds that prove cohesive in their sequencing, Black Holes successfully summons elements of better known artists’ outputs while allowing Muse to exhibit a sound that is uniquely their own.

A trio, Muse is fronted by lead singer/lead guitarist Matthew Bellamy, son of guitarist George, who had gained his own level of fame as the rhythm guitarist of Britain’s The Tornados, who topped the charts with their Joe Meek-produced space-rock excursion aboard “Telstar”.  Although Bellamy handles chores that might allow him to dominate the group’s direction, Muse is a true power trio, in that all members’ contributions are essential to the final product.  Muse is rounded out by bassist Christopher Wolstenholme and drummer Dominic Howard.  The roles within the group do tend to change depending on the dictates of the material, with Wolstenholme also handling rhythm guitar, harmonica, and backing vocals, Howard tackling the sampler, and all three members employing keyboards of some sort.

Bellamy’s voice and guitar are clearly the primary focus of the sound, however, and his skills in both capacities are significantly more than adequate to the task.  His ability to effortlessly switch to a beautifully quavering falsetto have earned him comparisons to both Freddie Mercury and Radiohead’s Thom Yorke, while his guitar work has him moving from delicate Spanish guitar stylings to crushing heaviness bordering on speed metal.  All this while maintaining a pop bent that broadens their appeal across a variety of demographics.

A casual comparison that’s made by lazy critics is to the Canadian legends, Rush.  While I wish I could say that’s true, and Muse does commonly wear its prog rock influences out in the daylight, Muse more strongly resembles Queen in their blend of pop, prog, classical, the technology of the day, and lushly orchestrated vocal overdubs.  Like both Queen and Rush, Muse is also known as a fantastic live group, capable of reproducing the wide variety of studio experimentation to thrilling effect before their fans.  But it’s not just the solid rhythm section, soaring guitar, and vocal harmony gymnastics that remind me of Queen, it’s that Muse is also fearless and they’ll attempt any style that properly frames their songs and keeps their music fresh to both old and new audiences.

A quick skip through the tracks on Black Holes reveals lyrics dealing with political frustrations and sci-fi scenarios warning of severe global changes.  The methods used to deliver these messages are far from static.  One surprising moment is found on the gorgeous yet sweet “Soldier’s Poem,” a 6/8 ballad highlighting both Bellamy’s falsetto and the aforementioned stack of angelic background vocal harmonies.  The musical arrangement is minimized to brush stroke percussion and a 1950’s style melodic piano progression (three notes up, three notes down) with subdued bass guitar.  The lyrics are sung from the point of view of the soldier, who will unquestioningly serve even while his mind knows there’s no such thing as justice and he’s not really contributing to the freedoms his countrymen feel they deserve.  It’s the album’s shortest piece, clocking in at just over two minutes, but it’s also one of the most thought-provoking and not set in a theoretical environment.  It could be the poem composed by any soldier from any area and the music remains intentionally, yet sadly noncommittal on the soldier’s plight.

The flirtation with speed metal arrives in the form of “Assassin,” with lyrics from the perspective of someone analyzing the forces driving a person to subvert democracy through the barrel of gun.  It’s a more severe return to the political frustration felt in “Soldier’s Poem,” but this song’s subject is devoid of any sense of loyalty and he’s taking matters into his own hands.  Dominic Howard is given the opportunity to transform the piece in-between the chorus (the metallic) and the verses (a high-speed Latin rhythm) just in case you thought Muse was trying to duplicate “Stone Cold Crazy.”  Don’t get me wrong; the riff is just as brutal and shocking as Queen’s tune, but it’s not nearly as single-minded as “Stone Cold.”  What tips us off that this is a Muse composition is Bellamy’s soaring lead voice and his use of wrinkling, electronically-induced feedback.

“Exo-politics” takes the lyrical theme in a related direction while exploring paranoia, helplessness, and blind devotion.  It’s also another moment of sci-fi brilliance as “the Zetas” ships fill the skies, concealing the fact that the invasion force is actually our leaders in disguise.  The song’s protagonist waits patiently for a sign of some sort to point him in a safe direction amidst Theremin-like effects and the band’s perfectly-crafted, perfectly confident buzz of a riff.  “City Of Delusion” follows, incorporating lyrically similar tear-it-down-and rebuild-it notions.  Yet this time the words are cloaked in a scorching tapestry of American southwest desertification, a dramatic string arrangement, a trumpet solo, cacophonous drums, and heavily enhanced bass guitar.  Bellamy’s occasional use of a brief “chukka chukka” riff on his electric guitar to set up new phrases contrasts splendidly with his deft acoustic strumming on the verses.

An otherworldly use of Spanish-influenced electric guitar and Dick Dale-style surf guitar riffs sets the pace for “Hoodoo,” but Bellamy quickly shifts to Chris Isaak balladeer mode, ushering in strings and classical piano to tell his tale of new love and altered reality.  The song only keeps to an established rhythm at times, as Bellamy freely flows through the lyrics to deliver them as he alone sees fit.  It’s here that we could most easily make the Thom Yorke comparison, as Bellamy’s delivery is dramatically emotional in both the lower and upper registers of his vocal range.

If you’ve been exposed to Black Holes and Revelations prior to reading about it here, chances are it was through the singles “Invincible” “Supermassive Black Holes” or “Knights Of Cydonia,” or perhaps in seeing Storm Thorgerson’s characteristically intriguing cover artwork.  Nonetheless, this is a record that you won’t be able to pigeonhole based on a single aspect of your experience.  You need to dig in deeper, take the plunge, and just buy the thing.  You won’t be disappointed.  It’s easily one of the best records released in the first decade of the 21-st Century and will be properly glorified for decades beyond.  It doesn’t matter if you’re a hipster or a rocker; there’s something here for everyone.