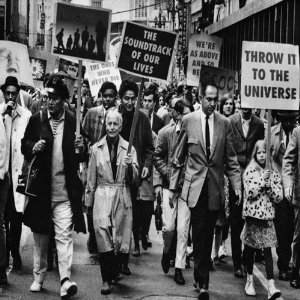 The Soundtrack Of Our Lives – Throw It To The Universe

Formed in 1995, Sweden’s The Soundtrack Of Our Lives has reportedly released their final album this summer, Throw It To The Universe.  This is a sad fact for fans of traditional classic rock that have been looking for a newer (post-1980) group who’ve developed a sound that both repeatedly nods to rock’s legends while keeping their sound fresh.  It’s true that our heroes are aging and not releasing as many defining albums as we once enjoyed, but walking that tightrope between the old and the new, without alienating fans of either side, is tricky business for a band that was in grade school or diapers during the 1970s.  Let’s take a closer look at a few tracks on Universe to see how TSOOL pulled it off.  Maybe there’s a roadmap for others that want to pick up where they left off.

Led by singer Ebbot Lundberg, who always writes and sings in English, TSOOL call upon gentler psychedelic elements of ‘60s and ‘70s rock while injecting melodies reminiscent of 1990s Britpop.  Imagine The Who without Keith Moon’s chaos, or The Rolling Stones without Jagger’s strutting or the sillier moments of the Goat’s Head Soup experiments, and you’re getting the picture.  While neither of those combos could be considered psychedelic warriors, they were certainly “of an era” and incorporated the sounds of the times into their repertoire.  When Britpop exploded, many of the flagship artists bowed to those groups if they weren’t ripping them off outright.  TSOOL are not guilty of thievery.  It’s more like they uncovered a sound that’s so obvious that we’re amazed it hadn’t been attempted previously.  What we’re left with is thoroughly enjoyable music that’ll make fans of both Love and Oasis smile in approval.

Before we dive into the CD, there’s some outstanding cover art to ponder.  Taking images of various protest marches and demonstrations, TSOOL inserted certain key lyrics from Universe in place of whatever the placards and banners said originally.  Intriguing?  Absolutely!  But the band isn’t really protesting anything at all; they’re merely spreading positive messages and promoting themselves.  That holds true across Universe’s 13 tracks.

The CD opens with the title track, kick-started with swirling radio broadcast noise, bright and confidently strummed acoustic guitar and Lundberg’s incredible voice.  He doesn’t really have a signature style, but he’s mellow smooth and sticks to a comfortable range.  The cut builds slowly and steadily as more instruments join in and effects are applied, but it begins to unravel purposely when the vocal track is sped up, sent adrift, and buried under more beguiling talk radio noise.  The song isn’t just the theme to the album, it’s also the theme of the band: “We say hello to say goodbye/We are the soundtrack of your life.”

“When We Fall,” a song composed by Lundberg and guitarist Ian Person, takes a look at how we grow as people, defined by how we fail and how we learn from our failures.  The main guitar line is very sweet and delicate, but it’s punctuated by a heavy bottom end courtesy of drummer Fredrik Sandsten and longtime bassist Kalle Gustafsson Jerneholm and some incidental slide guitar flair from either Person or fellow guitarist Mattias Bärjed.  I’m most impressed by the final couplet: “Forget the line that draws on forever/And everything you thought you’ve become/You’re just a clown of celestial weather/And you’re done when we fall.”  I could pull meaning from those lyrics, if I squint and listen to them with attention paid to different areas, in a multitude of ways.  When delivered with Lundberg’s endearing voice, I’m locked in as a fan for life.

“Where’s The Rock?”  Yeah, no kidding!  When I drift through the Top 40 radio stations, I wonder if the kids even appreciate rock any more, when they’re listening to pro-tooled, auto-tuned, cookie-cutter artists with no singular identity.  Where are the guitars?  Where are the live drums?  Can these people even sing, or do they let their producers transform them into singers through trickery?  I’m disgusted at what passes for pop music these days and so are TSOOL.  But they’re taking their frustrations one step further by projecting the question out beyond the product and at the minds of the artists themselves.  You’d expect the song’s delivery to be straightforward, uncompromising rock and roll, but TSOOL is too smart for that.  An opening Spanish guitar strum/pick setup and genius horn arrangements is how Lundberg and Person prefer to frame their inquisition.  Artists might emulate rock, but TSOOL points out that “It’s not in your eyes.”  If there’s ever been a method of correctly identifying someone’s genuine sentiment it’s by determining the trueness of their statements and evaluating their intentions from looking directly into their gaze.  Modern music would wither at such scrutiny.

An especially transcendent moment is found in “Reality Show,” written by Jernehom and Lundberg.  Ponder this line: “Coming back from a reality show/Of forgotten dreams/Full of memories from people you know/But you could not feel.”  They dig in even deeper as the song progresses, but the root conundrum is that there’s a huge difference between “knowing” someone through their art and actually knowing them.  Heck, I’m a fan of the TV show Survivor, to the point that I think I understand what motivates the participants and that I “know” who they are.  I’ve never met these people, nor do I really know them, but I feel like I know them through the magic of TV editing.  Get in deeper and really know people is TSOOL’s message.  Taking someone at face value will never actually allow you to form a bond with them.  You actually have to strike up a conversation and learn about them through their own words before you truly know what someone is all about.  Brilliant!

The last song that I want to discuss is “Busy Land,” which I’ve seen slagged in other reviews across the web.  Have these reviewers never heard early Pink Floyd or the band Tomorrow?  To slam TSOOL for making the song’s protagonist a “little white dwarf” is a bit short-sighted.  This is allegory, people, and TSOOL’s use of recorder, or some other simple, flute-like instrument is pure homage.  If you’re going to use some fictional race of person to describe an episode of bafflement with the greater world, you’re clearly pointing out that some people don’t keep up with technological development and they might feel ill at ease with what’s occurring in the world around them.  Yes, it’s a goofy, cute song, but they’re only walking across ground that Syd Barrett had trodden 40-some years ago with the same intent.  We’re all dwarves in a way, unless we’re totally wired into each new i-gadget or techno-wizard device that comes along.  Kudos to Lundberg and non-touring guitarist Björn Olsson for being both brave and reverent!

So we sadly bid farewell to The Soundtrack Of Our Lives, but we can rest assured that we’ll see more spectacular material from the band members in the years to come.  Throw It To The Universe, available on the excellent indie label Yep Roc, is great listening.  Hopefully other musicians with the same intention to appreciate what has come before while placing their own stamp on their art will follow suit and produce music that truly defies demographics.  I’ve got my eye on you, Lundberg and Company.  But thanks for the music you’ve released under the TSOOL banner.