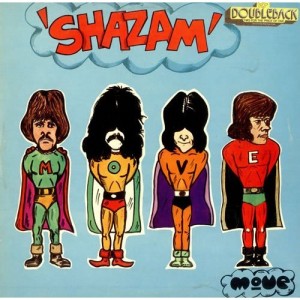 If I could call your attention to only one overlooked band from the U.K.’s late ‘60s/early’70s psychedelic scene, that band would be Birmingham’s The Move.  Considerably more popular in England than in the U.S., The Move hobnobbed with all the movers and shakers and enjoyed chart success with their singles, but highly questionable management decisions and an unstable lineup ultimately did them in.  To have a listen and determine for yourself whether they should have been as huge as The Kinks or The Who, check out their sophomore release from 1970, Shazam.  The original LP was reissued on CD in 2007 by UK label Fly/Salvo Records and augmented by the inclusion of 8 bonus tracks fleshing out the album’s 6 cuts.

The Move’s primary songwriter, guitarist Roy Wood, while usually prolific, was suffering from a lack of new material as the studio time was booked.  In order to have enough music to fill a standard album, the band chose to stretch some of their compositions out while also relying on songs written by other musicians.  Normally this tactic would result in a transparent failure.  While The Fates did not always smile on The Move, their gamble did pay off.  Shazam thus presents not only the multifaceted nature of the group but also exhibits their considerable musical prowess.

One excellent example of what makes Shazam such a classic is track three, “Cherry Blossom Clinic Revisited,” which, as its name suggests, is actually a slowed down and expanded version of a song featured on the band’s debut album.  The “Cherry Blossom Clinic” refers to a mental institution and the song’s protagonist describes his psychotic unraveling which mirrors a psychedelic experience.  Vocalist Carl Wayne pulls this off without sounding creepy or dopey and new bassist Rick Price delivers confidently and solidly.  The big surprise is the band’s choice not to employ brass or strings when taking a decidedly classical turn midway through the piece.  This left guitarist Wood to lift melodies from Bach and Tchaikovsky, forecasting his use of classical themes in a rock setting in the experiment he founded two years later, a little combo known as the Electric Light Orchestra.

The fourth, as yet unmentioned member of the group, also a co-founder of ELO, drummer Bev Bevan lets loose on the nearly 11-minute “Fields Of People.”  The song is one of the covers chosen for the album by vocalist Wayne and was written and recorded by the obscure American prog rock group, Ars Nova.  While Wayne was truly an amazing singer, his cohorts Wood and Price were no slouches either, and that’s displayed quite beautifully in the precious, hymn-like vocal arrangement.  But the unsung star is Bevan.  His skills can be favorably compared to Carmine Appice of The Vanilla Fudge, Cozy Powell or the eminent Carl Palmer.  As dazzling as Wood’s sitar-emulating raga break can be, it’s all blown away when Bevan picks up the pace and starts adding fills.  He didn’t often have the room to move like this on the ELO hits in later days, but it’s no surprise why he remained Wood’s closest companion throughout the tumult of shifting and departing band mates.  You can’t build anything on ground that isn’t solid, and Bevan’s playing is as tight as it gets.

Shift focus back to the rest of the group on “Don’t Make My Baby Blue,” a Mann/Weil composition popularized by both Frankie Laine and The Shadows.  The Move’s take on this song is more of a perversion than a tribute, with Wood’s guitars extremely overdriven and his notes flying intentionally out of tune.  It’s a bluesy grind in their hands.  Wayne’s vocals are at their ballsiest and Price’s bass is penetrating everything while high in the mix.  The background voices in the song’s close point the way to the sweetest power pop, a genre heavily indebted to the pop-rock singles composed by Roy Wood.

The bonus tracks are extremely enjoyable and present another aspect of the band that isn’t adequately presented on Shazam proper – their ability to record catchy, heavy rock singles.  One good example is “Wild Tiger Woman,” a song that fell short of the charts due mainly to the muddy original mono mix.  The version here is a cleaned up stereo mix that shows it had all the elements that should have pushed it over the top.  Check out Wood’s approximation of Jimi Hendrix (a buddy of Wood’s from back in the day) flashier tendencies and the piano work of a Mr. Nicky Hopkins.  One other interesting moment is found on “That Certain Something,” a song composed by Dave Morgan.  This is a demo version of the song featuring former Move bassist/guitarist Trevor Burton and some rather country-blues licks.  Carl Wayne shines on this track, and, with a bit more grit to his delivery, he could easily be mistaken for The Small Faces’ Steve Marriott.

Within two years of Shazam’s release, The Move had moved on.  Both Wayne and Price had departed by then, to be replaced by fellow Birmingham musician and Idle Race guitarist, Jeff Lynne.  But the Wood/Bevan/Lynne trio would go on to found one of the most successful groups of the 1970s (the restless Wood leaving ELO before the release of their second album).  It’s unbelievable that a group as talented as The Move, however, did not become a household name in The States as they did back home.  Rock history is full of such tales, unfortunately, with “what ifs” and “shoulda beens” more common than tales of lighted paths to the arena stage.  But this website is about not only the giants in the business, but also those that clearly should stand beside them and those that will one day.  Therefore, if you’re using our suggestions to help fill in the gaps to your collections and pick up on the things you may have missed and ought to have, your next stop on the web should be a site that lets you order Shazam.  Very few records can receive the urgent recommendation we’re sharing with you now.