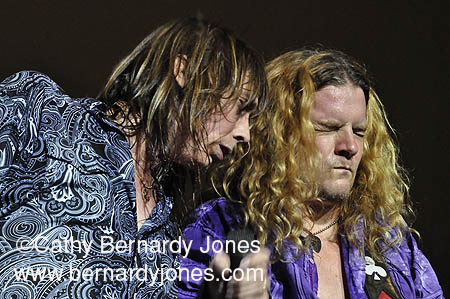 Ah, so what if the majority of Tesla’s 90-minute show was RePlugged Live? Those “perfect summer night in a park” rock shows often are the “mainstream crowd-pleaser” type shows. It’s the little out-of-the way shows tacked on to the tour around the crowd-pleasers that bring out the dusty tracks, odd covers, silly stories and looser atmosphere for a band’s hard-core audience (More on Frank Hannon’s solo shows coming soon). “Summer festival” sets by any band are likely to be the big hits, the favorites, the 45s that you had to buy two of so you could keep one in good shape while playing the other one to death.

But this is not to say that the Saturday night Mankato show was anything less than enjoyable. It’s lots of fun to have a chance to remember how important music was to your 17-year-old self and to have the MTV videos playing in your brain simultaneously with the band on stage. (Yes, Virginia, MTV used to play music videos 24 hours per day, and the biggest hit videos could sometimes bookend an hour.) Yep, Tesla have their crowd-pleaser show honed to perfection for a reason — they’ve been pleasing the crowds with it for decades.

The fact that they’re still able to play it to fans all across the country is a tribute to their professionalism as a group and the longevity of good rock music itself. A good “Love Song” is a good love song, no matter what year it is. If it happens to be your wedding song & you can see the band playing it for you with your arms around your sweetie so many years later – what’s a better memory to revisit than that? What “grown-up” doesn’t remember what he or she was going through when “Hang Tough,” “Gettin’ Better,” “Song & Emotion” and “Changes” provided needed comfort? Or how the monster cover hit “Signs” was such a fun, melodic  “up yours” to “the man” and spawned a whole era of “unplugged” tours & albums for rockers? Or the outlet that was “Mama’s Fool” or “No Way Out”? Surely you remember. It was before the art of a crafted guitar solo was lost by bands who stared at their shoes and didn’t wash their hair.

Just having a chance to re-experience the glee provided by “Modern Day Cowboy,” “Little Suzi” & “What U Give” were definitely worth dragging the lawn chair a few blocks Saturday  night. Yep, it was all there, wrapped up in a perfect-sounding package with a little slide guitar & whammy bar on top. Even a predictable gift is still a pleasant one. Sometimes it’s nice to get just exactly what you wanted. And when it still sounds just as good as it did back then, it’s easy to connect with your past rocker self for a little while.

(Tesla offers fans the chance to purchase a recording of their concerts, following the show. Great souvenir – who doesn’t have enough T-shirts by now? They’re not the only band to provide this, either. More information here: http://www.disclivenetwork.com/eventsandproducts1.cfm?producttypeid=1)