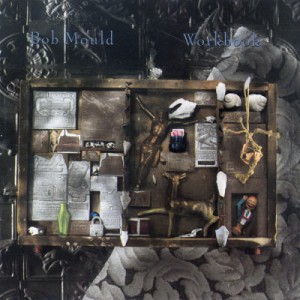 One of my favorite rock combos of the ‘80s shockingly dissolved in 1987 at their creative and commercial peak.  That band, Hüsker Dü, while never moving a record amount of product in album sales, became so completely influential on countless bands that followed during the hard-edged pop/”alternative” music peak that they’d easily earned their place among the legends of rock history.  With two main songwriters, drummer Grant Hart and guitarist Bob Mould, each with contrasting yet complimentary styles, Hüsker Dü’s legacy could now potentially be extended to include the solo material of Hart and Mould.  But speculators were ill prepared for the nature of those recordings.  Fans and followers expected Mould’s work to continue with his brand of barely contained rage dressed in pop melodies and brutally rendered guitar lines.  Instead, Mould’s introspection and sobriety revealed a beautiful and charming collection, Workbook.  Released in the spring of 1989 on the reemerging Virgin Records label, the self-produced album stands the test of time and remains an amazing, classic document.

That Bob Mould is a brilliant guitarist has always been evident.  But most fans of his work tend to think of his bone shattering delivery on the electric guitar and forget his acoustic work, such as the quieter pieces on Hüsker Dü’s Warner Brothers debut, Candy Apple Grey.  So Workbook’s opener, the two-minute acoustic guitar odyssey, “Sunspots,” seemed as if it may be the product of studio noodling rather than the accurate forecast of the relaxed pace the rest of the record would follow.  In fact, the next track, “Wishing Well,” seemed to support that notion.  It’s one of only two songs on the album that feature Mould’s heaviest electric guitar sounds.  But Mould’s freakout of a solo lurks in the background and disappears as quickly as it’s had its say, lost beneath layers of tasteful acoustic and electric strumming, Mould’s characteristic, rich yet endearingly nasal voice, and the rhythm section comprised of Pere Ubu bassist Tony Maimone and Golden Palominos drummer/leader, Anton Fier.  A tale of desire and dissatisfaction, “Wishing Well” demonstrates the reevaluation Mould had made of his life now that the marvel of Hüsker Dü had died.

There’s a weird suspension that occurs with the listener at this point.  “Wishing Well” was a nod to the adrenaline of the Hüskers and a gift to the fans that expected Mould’s trick bag to contain more variations on the same sounds.  So we wait, and meanwhile focus on Mould’s words, for noises that won’t return until Mould’s next album, Black Sheets Of Rain.  This is absolutely intentional.  Mould keeps us hanging on purpose and our mental gymnastics during that hang time facilitate the sharing of the emotions of a man who’d just lived through both the best and worst time of his life.  The backdrop of this reflection is stripped to position Mould’s voice at the top of everything while restricting the guitars, as incredible as ever, in more of a supporting role.

Mould is not singing triumphantly of an escape from a poisonous situation.  He feels partly responsible for brewing the poison and he can’t fully conceal the damage the poison had done to him.  So with songs such as “Sinners And Their Repentances,”  with nary an electric guitar or bottom end to be found, and the moody cello of Jane Scarpantoni in support, Mould seeks forgiveness from not only those he may have hurt, but from himself.  The “work” of Workbook is therefore revealed as the effort of a man trying to reinvent himself while restrained by the guilt of his past deeds.  Seldom have we heard lyrics as personal and painful as those found on this album and it’s through this sadness that Mould hopes to exit, a phoenix from the ashes.

The record’s “hit”, “See A Little Light,” with its overt pop structure and major key, feels like a castoff when cloaked in the rest of Workbook.  This is evident by the time we’re well into Side 2 and realize that Mould has little intention of cranking his amps to the max.  A trio of tunes in the middle of the side solidifies the sensation.  “Compositions For The Young And Old” marks the point at which Mould is beginning to feel his age and he comes across as the codger reflecting on simpler, less expensive times.  It’s a brighter tune than most on the album, but the lyrics read quite differently.  How else should we feel about a song that closes with the singer saying “I guess I’ll have to stay inside/Make peanut butter sandwiches and cry”?  At some point in the preparation of the record, Mould was considering reasons for extending his recluse and channeling a man 40 years his senior.

Mould then shifts into “Lonely Afternoon” and someone stepping back out into the world only to see all the shitty things that made him want to hide away in the first place.  It’s a great lyrical follow-up to the previous number and, like “Compositions” contains evidence of Mould’s improvements in songcraft.  The pre-chorus in “Afternoon,” like the time-changing instrumental break in “Compositions” demonstrate subtlety over bombast, a new way of exhibiting angst and frustration for the singer.  The notion of the prisoner seeking to escape the chains of his own making continues in “Dreaming, I Am.”  Here Mould becomes a chicken aware of the fox waiting for the hen’s attempt to get out of the pen.  It’s also a poppier piece, but not reminiscent of any previous attempts Mould had made to travel that road.  We’re made to understand that while we were waiting to hear what Mould would do in the wake of Hüsker Dü’s demise, Mould was composing an album full of songs wondering about the same thing.

After the last song, a return to Mould’s stinging guitar savagery, “Whichever Way The Wind Blows,” with lyrics about various animals meeting their ends while looking for different methods to cross a road, we feel as if we’ve just finished a great novel.  We’re not certain exactly where the subject is going to end up, but we understand him so much better and fully know the thoughts battling in his brain as he makes crucial decisions.  As we now know, Bob Mould is doing just fine.  He has built a remarkable catalog with his solo work, with the band Sugar and with our punk heroes from the Twin Cities, Hüsker Dü.  But the flux in his world during the period preceding the recording of Workbook gave him the perfect lyrical fodder for a truly astonishing album.  With all eyes and ears upon him, Mould started a new life and did something all of us wish we could also do, he put the bad stuff behind him and reinvented himself.  Maybe we can’t be as successful as Mould was at doing this, but it’s very inspirational to hear how he was able to pull it off.  Workbook deserves a place beside our favorite classic rock records and it’ll definitely teach us a thing or two about overcoming adversity.  Oh, and how to play guitar both wickedly and tunefully.