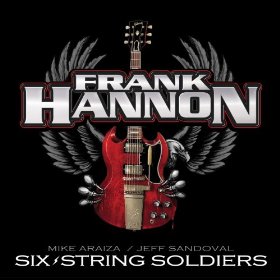 A lot of bands make claim to being the hardest working in show business. They’ll need to compare their 2012 calendars with Tesla‘s Frank Hannon, though, who has to be giving them all a run in the odometer-busting sweepstakes. Not only is Tesla actively touring, Hannon has been giging in support of not one but two different solo projects. Gypsy Highway technically didn’t come out this year, but he still was touring behind it in April when he played a raucous show in Mankato, Minnesota – moved a day because of the Ronnie Montrose tribute show the night before that Tesla took part in. (Montrose was responsible for their first hit, “Little Suzi,” so it was definitely something they were going to be involved with.)

Piggybacking with Tesla’s Upper Midwest gigs in late July and August, Hannon also had club dates scheduled to promote the Six-String Soldiers project, which is now available at your regular download outlets (pre-orders for the physical copies through Tesla’s merch page receive an autographed CD and a photo for a limited time. If you buy the physical CD, you’ll also get a code unlocking a “Making of the album” video). Shortly after the Rochester show, singer Jeff Sandoval noted on the Frank Hannon Band Facebook page that they’d covered 3,500 miles and seven states, 10 shows in 12 days in the record’s test run – and that doesn’t count Hannon’s Tesla miles. Basically, late-80s hard rock fans have a lot to keep them happy right now. 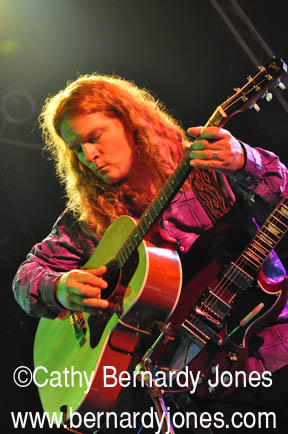 Hannon’s April club show was a great mix of new & old songs, with some covers and a vamp in the middle of the infectious “Brand New Shoes” that even included “Thank You Falettinme Be Mice Elf Agin” by Sly & The Family Stone. It was one of those shows where the artists pull out special treats for the hard-core audience. Case in point: the humorous “Heavy Metal Hippie,” which, he said, will never appear on any album, so you’ll have to catch it live — though there’s always YouTube! Other highlights of the personal diary-type Gypsy Highway played that night included the fun title track and “The Hills of California,” for which Hannon recently shot a video in one of his favorite places on the planet, his band news feed reports.

Fans of Hannon’s guitar work will find much to enjoy in that solo collection. “Sweet Southern Sound” calls to mind his Moon Dog Mane project from about a decade ago (and Courtney D’Augustine is back on some Six-String Soldier tracks). One of this reviewer’s favorites from Gypsy Highway is “Let’s Go Back to Bed,” which reminds me of some lovely, lazy Sundays, and the sentiment expressed in “You’re the One” is heartfelt.

In the same vein on Six-String Soldiers is the dear “Love, Life and  Beauty,” which singer Sandoval said at the Rochester show is about the love a person has for his spouse. Every wife should be so honored. Men, if you can’t verbalize it, just play your wife this one. It’s a guaranteed lady-melter.

The majority of Six-String Soldiers, though, just flat-out rocks. The riffs in “Redemption” and “Invincible” must be heard. Any fan of Southern rock will love to play “spot the reference” in the driving “Touch the Ground” (featuring Dickey Betts), and I defy listeners not to get “I’m Just Sayin'” stuck in their head immediately after hearing it. It’s a booty-shaking beauty, for sure. Anyone who’s been done wrong by a crazy B will fist-pump during “Lipstick, Smoke and Gasoline,” which features one of the snappiest lyrics on the record, “she’s a bit of nasty with a slice of mean.” If you like bluesy, searing vocals, check out the anguish in the unrequited-love song “Cross Your Mind.” Did you know that the word “why” has seven syllables? Crank that up. If this were 1989, it would be a chartbuster.

The record’s sequencing has a good ebb and flow, and it’s just an enjoyable ride from beginning to end. Until Hannon and band show up in your town, Six-String Soldiers will hold you over, ’80s hard rock fans, and feel as comfortable as your favorite jeans you can no longer get into. (Tesla knowledge not required to enjoy this record.)