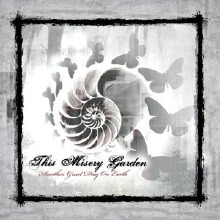 The debut release from Geneva, Switzerland’s, This Misery Garden on Progrock Records, Another Great Day On Earth pushes further into the dark side of prog as presented by bands such as Tool and A Perfect Circle.  Like those groups, TMG have a harder edge to their guitars and also use multi-tracked vocal layers courtesy of singer Benjamin (all performance credits list the band members using only their first names).  Benjamin, who is actually no longer with the band, was able to deliver with a combination of sweetness, melancholy, and aggression and varied his style throughout each song to match the changing tempos and complex arrangements of the rest of the group.  None of TMG’s songs are as densely complicated as those of Tool, but their choice to scale back in this area may have resulted in a recording that’s less prog and more listenable to a wider audience.  Unfortunately, in their struggle to solidify TMG’s lineup in the wake of Benjamin’s departure, there has not been extensive promotion for Another Great Day On Earth nor has the band embarked on a tour that’s taken them far from their home.  If their first CD is also to be their last, they’ve at least left behind a document that’s intriguing and shows great promise for the musicians that had committed to this project.  For that reason, Great Day bears further examination.

The disc’s title track, which also leads off in the track order, begins with a buzzy wash of guitars from Laurent and Antoine before the sound drops back to let bassist Jay and drummer Stephan structure the music behind the song’s verses.  This is one moment where the Tool influence is evident as the bass guitar is used to create a melody line.  We’ve heard this same technique used in numerous songs by Rush, where Geddy Lee carries the lead on his bass, leaving Alex Lifeson to add textures with processed guitar sounds.  The drums here are a tribal mélange of toms and kick with a reserve of the snare accents to primarily set up transition from verse to chorus, and from verse to verse, or to complete the drum phrase.  Benjamin’s voice is everywhere at once: above us, below us, penetrating to our emotional core.  The lyrics tell of a moment of clarity as the song’s protagonist steps from the darkness to embrace a life of healing.  All we need to know of what’s contained elsewhere on the disc is presented on this song.  It’s either not your thing at all, or, like me, you’re drawn in to hear what else TMG is capable of.

“Instant Recoil” is lyrically the opposite of what’s being shared on the title track.  In this story, the protagonist steps back into welcoming shadows which also bring healing to a damaged psyche.  The guitarists save their cacophony until near the end of the song, employing a dreamy echo effect for the most part.  This is not what the listener expects as most bands would choose a heavier sound for the song with darker lyrics.  It’s an example of TMG being a band that pours more into their craft and concept than 90 percent of other groups in the prog genre.  Benjamin’s vocals are, again, outstanding in their distant, bittersweet glory.

“Dirty Playground” is another high point to the CD.  The lyrics are actually about the fear of giving one’s self over to feelings of love.  The guitars alternately chime and crunch while Benjamin sings of celebration and lament.  “Playground” contrasts with “Say No Word” both lyrically and musically.  The latter song’s lyrics deal with a moment of realization that what has existed before is now gone and cannot be resurrected through any verbal exchange.  The music is angry and jagged, yet still contains the phased layering found elsewhere on the disc.  We’re given two different approaches that both reveal the band’s musical prowess.

Great Day closes with the gloom of “Everything Come To An End.”  The arrangement is murkier and the guitarists exhibit a debt to Tony Iommi with heaviness that’s simultaneously moving.  The pace is slower and the musicians paint a portrait of absolute despair and defeat.  Odd that the band chose to begin on an up note at the beginning of their debut and then dash all optimism with their final statement, but this is one more reason why I found myself ensnared by Great Day.

Fans of dream pop outfits such as No-man and Chameleons U.K. will find much to their liking on Another Great Day On Earth, yet whether This Misery Garden tries once more to maintain a consistent lineup at the outset of another project and through the resultant promotional tour remains to be seen.  In any case, if the musicians push forward into more commercial projects or keep on a path to prog heaven, we should be on the lookout for what comes next and not let this release fade further into obscurity.

One thought on “This Misery Garden – Another Great Day On Earth”