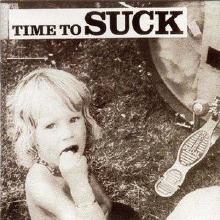 In the grand scheme of time, 8 months is not even a blink of the eye. But it was long enough for hard rockers Suck to make their name, maybe not in North America or Europe, but certainly in their native South Africa. Formed in Johannesburg in early 1970, the four members of Suck – Andy Ionnides (vocals, flute), Stephen “Gil” Gilroy (guitars), Louis “Moose” Forer (bass) and Saverio “Savvy” Grande (drums) – would unleash a maelstrom of heavy music and batter stages and props; then calling it a day before three seasons had passed.

From the beginning, Suck was out to shock. In the liners from the band’s sole release, Time To Suck, Forer states, “We wanted to be as controversial as possible,” and apparently had thought about calling themselves “Fuck,” but shied away. Instead, the foursome injected heavy doses of heavy rock into the music of their peers, serving up blistering covers of tunes from acts including Grand Funk Railroad, King Crimson, Deep Purple and Black Sabbath, along with a lone original, “The Whip.”

South African life in 1970 was dictated by a conservatism that extended directly from the despicable Apartheid mandate. It didn’t take Suck long to get under the skin of promoters and authorities with on-stage practices that included destroying gear and hacking mannequins with axes. In a career spanning no more than 240 days, Suck would be forcibly extricated from Rhodesia and given their walking papers at the South African border, banned and road-blocked from entering certain South African towns and obliged to play under assumed names to sidestep hesitant promoters.

They say any publicity is good publicity, but not in 1970’s South Africa, where rock and roll was viewed as dangerous to society and its impressionable youth. Suck barely got out of the gate before being put out to pasture for good. Still, the boys managed to lay down nine studio tracks that hint at what could have been. Suck’s sole composition, “The Whip,” is a fire-brand brooder, something of a cross between Black Sabbath and early Blue Oyster Cult, with a lumbering riff and bruising Ionnides vocal. The remaining eight tracks are covers. Suck’s 10-minute take on Donovan’s “Season Of The Witch” highlights Ionnides’ flute playing and Gilroy’s gritty guitar, even if the track sounds like it was recorded in a giant tin can. Searing versions of King Crimson’s “21st Century Schizoid Man,” Free’s “I’ll Be Creepin’” and Deep Purple’s “Into The Fire” feature expertly played barrages of guitar, bass and drums, proving that Suck was more than image. Though the Who-like stage antics gave them identity, Suck’s music and arrangements are what should be remembered. Check ’em out at Fresh Music.

One thought on “Suck – Time To Suck”