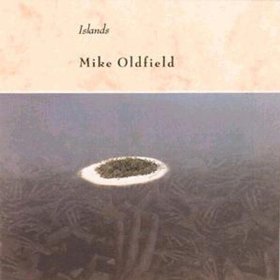 Mike Oldfield is the composer and artist responsible for Tubular Bells, which you’ll probably remember as the creepy theme to William Friedkin’s 1973 chill fest, The Exorcist.  That recording, the first for Richard Branson’s Virgin label, was groundbreaking in several ways, from the recording methods used to the material itself – heavily influenced by progressive rock and foreshadowing the New Age music movement.  But Oldfield actually has an extensive resume, with next month seeing the release of his 25th studio album, Man On The Rocks.  While I wouldn’t mind padding my collection with what I’m missing, today I’ll make do listening to 1987’s Islands, a record that falls in with those considered by Oldfield’s legion of fans to be from his “pop period.”  While it’s not nearly as impressive as Tubular Bells, Islands does prove to be a solid listen from front to back.

Mike Oldfield’s “pop” records typically rely on a proven formula – one side for a lengthy, proggy instrumental piece, and the other side reserved for a handful of more straight-ahead pop songs with guest vocalists.  So, Side One’s workout unveils “The Wind Chimes,” a song that breaks its 21+ minutes into two movements.  Oldfield is thought of as mainly a guitarist and bassist, but his albums have given him the opportunity to stretch out and play an alarming number of instruments.  With “The Wind Chimes” being primarily a synthesizer-driven number with wonderful samples of human voices and bell tones interwoven, his choice of Björn J:Son Lindh as guest flutist (Lindh is the guy that delivered the distinctive flute solo on Murray Head’s “One Night In Bangkok”) is a genius stroke.  But “The Wind Chimes” is a stately composition, which could easily be mistaken as the theme music for some sort of historical or nature special on the Discovery Channel.  There’s nothing “rock n roll” about it.  Instead, it’s professional and calculated which may alienate fans of grittier material and even fans of Tubular Bells due to “The Wind Chimes” not being dark enough.

Flip the record to listen to some of Oldfield’s charting singles and music more closely resembling rock.  We start with “Magic Touch,”, featuring vocals by Max Bacon (of ‘80s, short-lived supergroup, GTR) and production assistance from Geoff Downes (Asia, Yes, Buggles).  Guitarists Rick Fenn and Micky Moody are present, but the liner notes don’t indicate who plays where.  Yet whether its Fenn, Moody, or Oldfield that delivers the guitar solos, they’re outstanding.  The song has a feel much like the work that Yes was doing in the ‘80s, but it’s intentions as a pop hit are not easily concealed.

The overt pop orchestrations continue on “The Time Has Come,” featuring Oldfield’s then wife at the time, Anita Hegerland.  This is a piece that just continues to build and build across its nearly four-minute length, employing lush synthesizers and spectral guitar filigree.  The superior Hegland-sung piece follows, however, with “North Point.”  Here the guitar is more prominent and Hegland’s voice becomes a choir, similar to the multi-tracking methods used by Enya, among others.

Oldfield called in help from old chum Kevin Ayers on “Flying Start.”  Ayers does seem a bit out of his element amidst the plodding drum track and the shimmering keyboard echoes, but his voice proves why Oldfield called him up.  Ayers has this ability to make you feel like you’re one of his oldest friends and he’s got a new tale to tell you after dinner.  Despite the ill-fit of the vocals and the music, Ayers delivers.  The weird close to the album comes with its title track, sung by the scratchy-throated Bonnie Tyler.  I can’t say that I’ve ever been much of a fan of her own music, but how she’s used here deflects the blow a bit.  This was released as a single by “Mike and Bonnie” in the U.K., where Tyler could rely more on her star power than the one-hit-wonderdom she enjoys in the States.  It’s not a particular favorite of mine, and it only leaves me wishing that Oldfield had used guest saxophonist Rafael Ravenscroft (the dude responsible for the devastating solos on Gerry Rafferty’s “Baker Street”) to better effect than that from him just wailing over the outtro.

My copy of Islands is an original vinyl version on Virgin Records from 1987.  The cover art is killer – with sea and sky images stretched neatly over cubes.  The UK and CD releases include different, inferior art work, so shop accordingly.  Another difference is that the CD reissue includes a bonus track sung by a fellow from Glasgow going by the name of Southside Jimmy (real name Jim Price) called “When The Night’s On Fire.”  As I haven’t heard the cut, I can’t say whether or not it fits in well with the material on the original version, but we’d love to hear from anyone that’s heard it and has an opinion.

Mike Oldfield has always been one of those artists on the fringe that has seen far greater success in Europe than in the U.S.  It could be that his brand of sophisticated song sculpture falls flat when heard by our ears, or it’s more likely that he just doesn’t get the right kind of exposure these days.  Nonetheless, he’s an artist whose repertoire deserves a thorough once-over from fans of all sorts of music.  I’ll be interested to hear if his new album lands closer to the somewhat interesting music released during the “pop period” or is more closely aligned to the thoroughly engaging Tubular Bells.  In either case, Oldfield knows well how to add exciting and unpredictable elements to his output, so we’re unlikely to be disappointed.