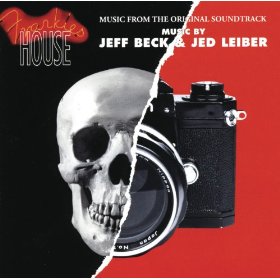 Jeff Beck is one of those guys that have taught us not to trust rumors of an artist’s “farewell tour”.  He’s been trying to retire for decades, but I’ve just read that he has a new album coming out this spring.  Whatever, Jeff…

Well, as much as Jeff has said that he’d rather be working on his hot rods than recording new music or touring, he’s had a fair amount of work slip by under the radar over the years.  During one lull in overt activity in 1992, Mr. Beck did work on the soundtrack for an Australian A&E Network’s television movie mini-series starring Iain Glen and Kevin Dillon, called Frankie’s House.  Teaming up with keyboardist Jed Leiber, Beck delivered brilliant interstitial pieces that ranged across moods from playful to menacing to devastating and back again.  Long out of print on CD, it saw a re-release late last year by the classy Friday Music label, which has also overseen the release of several other obscure Beck recordings as well as 180-gram vinyl reissues of classics like Blow By Blow and Wired.  I give Friday Music big props for rescuing the Frankie’s House soundtrack from the nether regions of the cut-out bins, and for recognizing that the music contained therein is actually some of the best work Beck had done across his entire career.

I’ve not seen the movie Frankie’s House, but I’ve gathered that it’s about photojournalism during the Vietnam War.  Grim and gripping stuff for sure!  But you don’t really need to know the storyline to enjoy the 15 instrumental tracks collected here.  I don’t know if the tracks correspond to a chronological use from the film, but the soundtrack does have a logical flow to it that carries us through the variety of dramatic settings used in the film.  While Back and Leiber’s styles are all over the map as the film dictates, it serves as an excellent reminder that Beck is equally at ease playing heavy rock, blues, jazz, “oldies,” and atmospheric sounds bordering on New Age music.

Opening with a few echoing lightning bursts from both musicians, “The Jungle” then descends into what’s likely the opening credit sequence.  With Leiber’s Southeast Asian textures and steady rhythm track below Beck’s alternately blistering and gently melodic solos, it’s the perfect set-up for what’s to follow.  Inexplicably, a few tracks later, Beck’s breaking into the foot-stomping classic “Hi-Heel Sneakers,” in a rather straight-forward reading backed by Lieber’s honky tonk accompaniment and barrelhouse solo.  The cut isn’t as jarring as you might think, and actually elevates the listener’s awareness that we could be in for just about anything as this record keeps spinning.

Switch gears on the CD’s briefest track, “Thailand,” which consists of roughly half Leiber’s spooky bamboo forest pipe sounds and half badass blues riffs from Beck.  After a quick fade-out, we’re treated to “Love and Death” and some of Beck’s most elegant sonic manipulation in the higher registers.  Gauzy, weepy, whammied notes drape themselves across Leiber’s synth tones.  Part way in, we realize we’ve been faked out as Beck takes a turn at backbreaking metal before easing back into the misty emotions.

The track that sticks with me most is called “White Mice,” and it begins with Beck stabbing through the darkness with nasty, roaring dinosaur noises before taking a step into a funky, up-tempo blues with Leiber’s Bernie Worrell-style organ puffing alongside.  This single three-minute song exhibits all that Beck is capable of – fancy finger-picking, battering metalisms, deftly inserted blues and jazz licks, and unnerving and other-dimensional spookfests – the ride is thrilling.

So, while we wait to see if the tour supporting Jeff’s forthcoming release proves to be his last, we can sample some of his outstanding collections from throughout his career.  And now that the Frankie’s House soundtrack is once more back in circulation, make sure to check it out to hear what else you’ve been missing from this maestro.