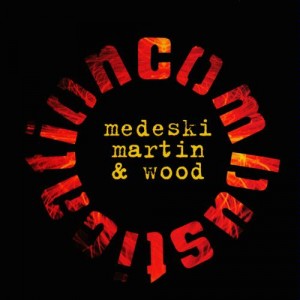 Once upon a time, I was a Deadhead.  Alright, just like you can’t say, “I used to be a Marine,” once you’re a Deadhead, you’re always a Deadhead.  But back in the day, when I was checking out the world of Phish, Blues Traveler and even The Spin Doctors (remember them?), I was also listening to artists that interacted with bands that embraced live improvisation in a rock and roll setting.  Thus I stumbled upon records from groups I’d previously encountered when spinning jazz on the local college radio station.  “Really?  Phish jams with Medeski, Martin & Wood?”  Life is full of spinning circles such as this.

By 1998, the NYC jazz trio Medeski, Martin & Wood had already released a batch of albums.  But Combustication was their first for well-respected jazz label Blue Note.  Would this change anything about their loose grooviness?  Definitely not!  It seemed that Blue Note had signed them with the intention of pumping some life into the withering merits of the label.  The group ran with it, honored at being signed, but with no plans to derail the career they’d been forming all along.  In fact, they chose to bring in only one guest musician, turntablist DJ Logic, and stayed in step with their odes to urban soul jazz.

There isn’t a bad track amongst the dozen presented on Combustication, but I only want to tell you about a few of them so you’ll get the idea and go out and buy the thing yourself.  There’s “Just Like I Pictured It,” a slow moving funk with bassist Chris Wood giving us a rubber-necked solo to contrast the piano of John Medeski, when not spilling out the guts that hold the whole thing together.  It’s Jimmy Smith for the modern crowd and just as slinky as you’d like it to be.  “Hey-Hee-Hi-Ho” starts with a shuffle and an inescapable backbeat from drummer Billy Martin.  You thought you’d heard funky jazz before, but the trio’s here to teach you what you don’t know.  Once the groove is established, Medeski sets to performing some sort of abusive ritual on the keys of his Hammond.  It all keeps coming full circle to the groove and isn’t even thrown off course by the steady, double-time hand claps that pop up mid-song.

One of the album’s lengthier pieces is “Latin Shuffle,” which is just that.  The behind the beat cowbell and rimshot snare are constantly changing up the rhythm, however.  Medeski’s lightning fingers bend from free jazz riffs to cascading, nearly non-musical noises, and back to the Caribbean key changes.  Wood is nearly left behind on this excursion, while Martin stops everything for a mini-solo before plowing right back into the off-kilter beats.  “Church Of Logic” gets pretty tripped out and becomes even more noncorporeal when DJ Logic starts scratching to produce some sort of barking dog effect.  The whole song is really just a bed for Logic’s skillz, as the band goes in and out of Funky Town and Nowheresville.  Medeski’s electronic piano is the supporting actor in Logic’s lead role.

One very unusual and endlessly listenable song is called “No Ke Ano Ahiahi,” a title for which I have no translation and which the band picked up while rehearsing in their hideaway shack in the jungles of Hawaii.  Wood is beating on a bass drum while Martin shakes some sort of clackity shell percussion to provide Medeski with a base on which to fiddle with his Wurlitzer.  This isn’t jazz as most of us know it, but it does indeed swing.  It’s this kind of left field approach to the staid conventions of jazz that should lead adventurous listeners to seek out MMW.  You don’t have to be a Deadhead to like MMW, but you do have to like artists that never fail when they take chances.