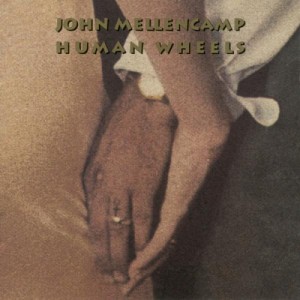 John Mellencamp is one of those artists that people take for granted.  I’m certainly guilty of that error.  Within my exploding record and CD cabinets, there is exactly one release by Mr. Mellencamp, 1993’s Human Wheels.  It’s not that I dislike his music.  In fact, with the exception of the song, “Jack & Diane,” which I’ll never need to hear again, I quite like everything I’ve heard by him.  When given the chance to stretch out and follow his muse, Mellencamp is a guy that sees all music, R&B, folk, classic rock, country and blues, as merely shades of the same entity.  It all works its way into his catalog eventually and in different configurations.  So why do so many of us pass him by?  Perhaps our sensibilities are tainted by the MTV days, where Mellencamp (as “Cougar”) ruled both radio and video.  Were we overexposed?  Whatever our deal is, there was something about the songs on Human Wheels that caused me to sit up and take notice.

Leading off with “When Jesus Left Birmingham,” Human Wheels is intentionally plotting a new course.  The metronome-perfect rhythm laid down by long time Mellencamp drummer, Kenny Aronoff, is just begging for a hip hop crew to license a sample.  This is what Mellencamp feels make the record his “most urban.”  He’s consciously reflecting the sounds he’d been hearing from R&B and rap music, but with his signature stamp placed upon it.  The lyrics point towards the fact that people, without conscience, or soul, or religion, will fall to their base urges and behave less than respectfully.  This isn’t Mellencamp finding God or pushing us to do the same, but more an examination of the imperfection of humanity.  It’s a very smart song that could easily be taken the wrong way, but it also gives him a chance to reuse the line from “Jack & Diane,” “Let the bible belt come and save my soul”.

Track 2, “Junior,” is Mellencamp getting inside the head of  a guy that’s not exactly well off and how he can easily disregard life for a promise of something better in the afterlife.  The song is an example once again of artist as sociologist.  It asks the greater question of why poverty and complacency persist in the modern day, but leaves us to find our own answers.  Aside from another stellar delivery from Aronoff on drums and assorted other percussion, Toby Myers’ bass is what really anchors the piece.  David Grissom’s funky, yet pained lead guitar smolders just slightly above the rhythm section and is worth the closer listen.

The title track follows, and it rewards us with what are some of Mellencamp’s best lyrics.  What I mean is that there are lyrics and there is poetry.  Anyone can write some nonsense syllables that match a song’s rhythm, but few can write words for a song that can stand on their own and deliver both meaning and beauty.  Witness the opening lines: “This land, today, shall draw its last breath/And take into its ancient depths/This frail reminder of its giant, dreaming self/While I, with human-hindered eyes/Unequal to the sweeping curve of life/Stand on this single print of time.”  That’s pretty heavy and miles away from “C’mon, baby, make it hurt so good.”  The lines come in the midst of a killer hook on the chorus, some spicy guitar and dobro, and an odd, disconcerting, “Hurdy Gurdy Man” effect on Mellencamp’s voice during the verses.  It’s unfortunately also what causes Mellencamp to lose favor with radio audiences – we sure hate our good ol’ boys to have a brain.

The musical mood is lightened on the next song, “Beige To Beige,” featuring a great melody from violinist Lisa Germano.  But the lyrics do not match the tune’s optimism.  Here Mellencamp is discussing homogeneity and how it ultimately lessens humanity.  If you give Mellencamp credit for anything, please recognize that he believes our differences are something to be celebrated.  “A world without color is a world without sound/A world to keep the rabble down,” he opines.  He could give a listen to modern pop radio, devoid of identity and auto-tuned to death, and know how right he was.

The song that drew me in to Human Wheels was the hit, “What If I Came Knocking.”  Above the amped up guitars and tribal beat, Mellencamp is calling attention to the manner in which we fail to recognize the common threads of humanity.  Our fears of differences cause us to turn a blind eye to the plight of our fellows.  No matter what emotions are evident in those that suffer, emotions that we share with everyone, we can’t be bothered to care.  It’s one more powerful statement from a guy that’s maturing and questioning what it all means.  It’s NOT what pop music fans are looking for in a catchy tune and the song did not perform nearly as well as singles released from the handful of previous Mellencamp albums.  But it’s the song that convinced me that I needed to start listening more closely to what this Hoosier had to say.

My lapse is that I didn’t keep listening.  I was easily distracted by the grunge du jour or the techno this, that, and the other.  It’s time that I got back on track and started delving into John Mellencamp’s catalog.  If you’d like to follow suit, do yourself a favor and start with Human Wheels.  It’s certainly one of his best and criminally underrated.  He’s not going to provide you with any answers to your own predicament, but he’s definitely letting you know which questions you ought to be asking.