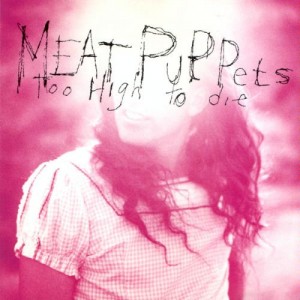 Having been an ardent follower of the excellent label SST during its heyday, I was already quite familiar with the sun-damaged country punk of Arizona’s Meat Puppets by the time they’d “graduated” to a major label.  Their second album for London Records, Too High To Die, originally unsheathed in 1994, is a straight up classic and is now criminally out of print.  Dig around through the used record bins, though, and you too can see why this was the release that both broke them to the masses and brought about a nasty downturn for their original line up.

Produced by Butthole Surfers’ guitarist Paul Leary and mixed by metal guru Dave Jerden, the band had all their stars aligned for Too HighTo Die, with motivation, killer material, and an opening slot on Nirvana’s In Utero tour.  They waste no time in delivering a crunchier sound, with both producer and mixer enhancing guitarist Curt Kirkwood’s already considerable skills.  “Violet Eyes” kicks things off at breakneck pace and with trademark bizarre lyrics.  Kirkwood’s leads are blistering as he sings about a “plastic baby” and a “Robot Kingdom.”  Yet longtime fans were probably wondering what happened to the “cow punk” and they didn’t have to wait for too long.  “Never To Be Found” followed in some convoluted amalgam of country, jazz, and punk.  Curt’s playing here is not nearly as metallic, but no less stunning.  The 6/8 time signature is sturdily held by drummer Derrick Bostrom, while bassist Cris Kirkwood chooses to play single notes up and down the scale without fill or deviation.  And check the classic false ending!

The should-have-been-a-hit “We Don’t Exist” chased right behind with a stomping ZZ Top riff and Curt’s deft flow from aggro rhythm strumming into beautiful and unexpected chords.  As impressive as the band sounds here, the train flying off the rails pace and the lyrics dealing with a longing for cayenne probably prevented the song from becoming more than a cult favorite.  Speaking of weirdness, “Severed Goddess Hand,” as a title, belies the fact that this is actually a rather pretty pop song.  Curt and Cris deliver some of their best harmony and background vocals while Bostrom keeps to a quick tempo.

“Flaming Heart” makes an attempt at country-fication, with dazzling chord changes and very strong vocals.  But by the time Curt starts revving up for his solo it’s as if The Grateful Dead had formed about ten years later and was gigging at CBGB’s.  And while we’re talking about the blues (weren’t we?), “Roof With A Hole” is nothing but, right down to the Peter Green-esque solo.  The lyrics are less obscure than heard elsewhere on Too High and they’ve even brought in Jim Dickinson for some excellent Hammond B-3 work.  The big hit, the only one for the Pups, “Backwater,” follows “Roof.”  To my ears, this is some of the best guitar work ever recorded.  Curt’s solo is almost like an homage to Leary’s work in The Surfers, with strangled phrases that threaten to permanently damage reality.  The faintly country vibe that peeks out from behind the clouds of smoke is what distinguishes this song as something only the Meat Puppets could have conceived of, however.

Alas, with success too often comes excess as well.  While the band had been no strangers to “chemical enhancement” over the years, a bigger influx of cash and hanging around with the doomed Mr. Cobain proved too much for Cris Kirkwood.  His addiction to heroin and crack cocaine had him holed up in his Tempe home while loved ones perished around him.  After one more record on London, the original lineup broke up. Cris and Curt are now back together as the Meat Puppets, but without the gears that churned beneath them, Derrick Bostrom.  I haven’t heard much of their newer material, but I’m willing to give it a shot.  I can’t imagine Curt has lost anything over the years and Cris could do just fine if he’s cleaned up.  But I can’t help but wonder what might have happened if the band could have stayed on course and had been recording and touring as the original trio all these years.  In any case, you’ll have to scour the used record stores for this gem, my friends.  If you find it, don’t walk out of the store without it.  And when you play it, let track 13 of the CD keep on spinning to hear a surprise “remake” of one of their songs from Meat Puppets II, “Lake Of Fire.”  You’ll see why Kurt Cobain sang it so passionately when he performed it with the Pups on MTV’s Unplugged.