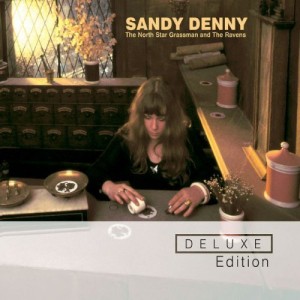 The incredible voice of Sandy Denny is well known to fans of early Fairport Convention and those that bothered to investigate who was singing the duet with Robert Plant on Led Zeppelin’s “The Battle Of Evermore.”  Her debut solo album has recently been reissued in the UK in a deluxe, double disc set.  Originally released in 1971, The North Star Grassman and the Ravens gave Sandy an opportunity to break away from the stricter, folk settings of Fairport and the band she formed following her departure, Fotheringay.  Yet Denny had worked with and encountered a number of excellent musicians at this point in her career and she was able to bring many of them with her into the studio.  Chock full of bonus material from the same era, the reissue does a wonderful job at paying homage to woman considered to be one of England’s best singers.

Leading off with “Late November,” Denny plants her flag as the leader of this particular combination of musicians on a track completely dominated by her voice and piano.  Augmented by three guitarists; Fairport and Fotheringay alumni Jerry Donahue and Denny’s soon-to-be husband Trevor Lucas, and the brilliant and under-appreciated Richard Thompson (who shares production credits with Denny on the album) as well as the Fotheringay rhythm section of bassist Pat Donaldson and drummer Gerry Conway, Denny obviously seeks to distinguish this material from that recorded by the band as Fotheringay.  “Late November” has its roots more firmly buried in current pop rock and would not have sounded out place on a Fleetwood Mac record from the early ‘70s (except that Denny could sing circles around Christine McVie).

Switching to acoustic guitar for “Blackwaterside,” Denny has a go at a traditional folk tune.  Yet Thompson’s contribution of accordion and his trademark, snaky guitar fills take this song in unpredictable directions.  Denny continues to alternate between piano and guitar throughout the album, not merely keeping pace with the band, but showing them which course she wants them to take.  She does this equally well when not playing an instrument as on “John The Gun.”  Though backed by pianist Ian Whiteman, formerly of the London groups, The Action and Mighty Baby, as well as the respected English fiddler, Barry Dransfield on “fuzz violin,” the song is under Denny’s complete control.  Even Lucas’ and Dransfield’s harmony vocals only serve as a compliment to Denny’s sad-keyed voice.

The original album closed with “Crazy Lady Blues,” a song possibly more autobiographical than Denny would have cared to admit.  The feel here is more country than folk as the solos are delivered by one of the most respected pedal steel players of the day, Buddy Emmons.  Whiteman, Thompson, and Conway round out the lineup and allow Denny to strum merrily on her guitar once more.  It’s an odd song, and seems far too short at under 3 ½ minutes, but it fits perfectly in wrapping up the collection.  The fun doesn’t stop here, however, as disc one contains unreleased studio outtakes from the session, including an instrumental featuring Thompson, Whiteman, Donaldson, and Conway in a reading of the tune, “Lord Bateman” and songs containing duets with both Thompson and another Fairport alumnus, Ian Matthews.

Disc two contains nothing but bonus material, this time demos of songs that were to appear on North Star as well as BBC sessions from 1971 and 1972.  This is where Denny’s true genius is revealed as nearly all of these cuts feature Denny alone, sometimes with instrumental accompaniment and sometimes casting the spotlight on her naked voice.  The best of the demos is “The Sea Captain,” a song which is not greatly enhanced when featuring her musicians on the album.  Here, with just an acoustic guitar and a microphone, Denny gives full evidence of the charms which have endeared us to her throughout the decades.

The BBC sessions, by contrast are starker than the demo recordings, adding a haunting pallor over the music.  Denny’s voice does not falter in a live setting and oddly sounds even better than the takes used on her album.  “Late November,” brilliant on North Star, is positively chilling when allowing Denny’s voice and piano to echo off the studio’s walls rather than with doctored enhancement from the mixing board.  “Blackwaterside” also sounds more authentic without the full band arrangement (sorry, Richard).  It showcases Denny’s natural talent with traditional material and proves that singers such as Judy Collins were sad and pale imitators of Denny’s elegance.  The title track to her record is also featured on the BBC sessions in a version dramatically different from that with the full band.  Denny’s voice is whispery and elegiac before soaring to the higher reaches of her range.  Her reading of the traditional “Bruton Town” grips the heart of the listener and needs only Denny’s guitar to add muscle to an already powerful piece.  Her solo presentation of “Next Time Around,” which uses a string section on North Star, loses nothing when only backed by her piano.

Many classic albums are about to see the 40-years-on reissue treatment.  The artists and record labels involved are going to be hard pressed to assemble packages as impressive as that assigned to North Star.  Sandy Denny, while a less than perfect human being, who died far too young, had a gift not granted to many who walked the Earth alongside her.  Her art deserves celebration and acknowledgement of its historical significance.  Luckily, this was understood by Universal-Island in the UK and we have them to thank for sharing Denny’s gift with us once more.