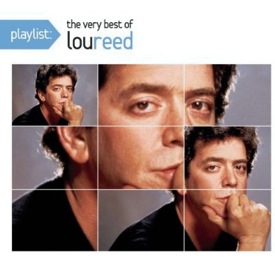 Now that Sony and BMG have become a gigantic music conglomerate, we’re hoping that they’ll use those pooled resources to release interesting new products involving their massively extensive library.  We’ve long been fans of the Columbia Legacy reissue project through Sony, but now we’re seeing that treatment adapted to BMG’s back catalog as well with their Playlist series.  It’s the same attention and respect that we’d come to appreciate with Columbia Legacy… with a twist.

Playlist: The Very Best Of Lou Reed contains all the music we’d expect to have on a single-disc retrospective of Lou’s years at RCA, but we’re also getting it in a package that contains no plastic (all post-consumer paperboard) which also features a PDF on the CD containing lots of bonus material.  Aside from the track listing with timings, there are also some great images from Reed in his heyday, a good few paragraphs of liner notes, the production and songwriting credits for each song, a link to online shopping for Lou’s RCA catalog and a couple options for wallpaper for your PC.  The focus is on reclaiming digital media outlets from other companies that provide “compromised” music on MP3.  It’s unlikely that Playlist will succeed in doing this for Sony BMG, but we get treated to another fine collection of Lou’s music in the attempt.

The CD itself contains all of the songs you’d expect with a few surprises.  The music is arranged chronologically and does not draw from each of Reed’s records with RCA.  The perfect stating point is “I Can’t Stand It” from his solo debut.  We roll right into a full four cuts from the 1972 classic Transformer: “Vicious,” “Walk On The Wild Side,” “Perfect Day” and “Satellite Of Love.”   From 1973’s Berlin is the disturbing “Caroline Says II.”  The live Rock ‘N’ Roll Animal is represented by its blistering version of “White Light/White Heat.”  We’re also treated to the title tracks to Sally Can’t Dance and Coney Island Baby as well as “Kicks” from the latter.  The harrowing 11-minute title track to Street Hassle is also here as well as a smokin’ “Sweet Jane” from 1984’s Live In Italy.  The disc closes with Reed’s last near-hit with RCA, “I Love You, Suzanne” from New Sensations.

We may quibble about leaving off this track or including that one, but Playlist really does contain all of Reed’s better known tracks from the period and shows a bit of his experimental side during this prolific time in his career.  We can anticipate more releases in this series and each will have material to appease the casual fan and the die-hard as well.