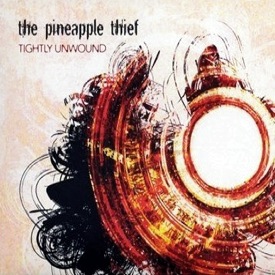 Tightly Unwound is the seventh studio release from England’s The Pineapple Thief and their first release for Kscope/Snapper Records.  Led by guitarist/singer/songwriter Bruce Soord, the quartet is rounded out by bassist John Sykes, drummer Keith Harrison and keyboardist Steve Kitch.  After cultivating a following over nearly ten years, the band was encouraged by Porcupine Tree frontman Steven Wilson to join with Kscope in order to bring their music to a wider audience.  Kscope, home to other artists with “post-prog” tendencies is a perfect fit for Soord and company.  Tightly Unwound is a clever amalgam of light, sometimes ornate, indie pop with lengthier pieces that build upon themselves and are obscurely structured in movements with well planned repetition of theme.  This is music for which there is little comparison, but that may actually be pushing the boundaries of a developing movement.

Unwound begins with Soord’s sweet, whispery voice and simple chords for structure on “My Debt To You.” Eventually Soord is gently plucking and strumming his guitar, with bass and keyboards subtly adding form behind Soord’s ode to past generations.  It’s an unassuming start to a record, but that is the genius of The Pineapple Thief.  If you’re not willing to delve into the sound, Soord doesn’t need you along for the ride.  This is a sentiment that he shares with some of the best prog-rock from the days of yore.  Follow Nektar or Gentle Giant or even the deep cuts on Jethro Tull’s Aqualung and you’ll discover gold that is not apparent on the surface.  Just as we’re not exactly sure what to expect of this record, Soord throws us a curveball on track two with “Shoot First.”  The guitar and bass are heavier, the drums come out to play, and the keyboards shift to something more commonly found on a backing track for The Orb.  The only constant is Soord’s mellow voice, as he’s switching back and forth between electric bash and acoustic drive.  The plot thickens.

By the third cut, I was completely hooked.  “Sinners” shows off the skills of Harrison as Soord strolls boldly into shoegazer country.  His acoustic guitar underneath a simple and effective solo is what told me that this wasn’t a lost track from Chapterhouse.  Soord’s fuzz and blur are not turned up to 11; you don’t have to lose your hearing to get what he’s on about.  And after a build up using several turns of tune and phrase on the shorter pieces, the meat of the matter is then found on the disc’s longer pieces, “Different World” and “Too Much To Lose.”  The former tops out over 10 minutes and allows Soord to expand on the elements he’s merely toyed with earlier on.  He lulls us into a state of calm with long stretches of guitar strumming and sampled, chirping birds before using his electric guitar for effect and tone variation.  The band is pushing us along in a heavier direction before everything drops out in favor of singular notes from Kitch’s piano and a lush string arrangement.  Soord’s acoustic strum then brings us back for more brilliant fills from Harrison and Soord’s splendid electric work.  His voice rises above the mix and is at its most beautiful.  Then, at over 15 minutes in length, the disc’s closer “Too Much To Lose” takes a different direction entirely and allows Soord to play with stopping rhythms, distorted and echoed vocals, chilling mellotron and a spectral electric guitar line.  The pace is very slow for the most part, but each band member is given an opportunity to showoff their strengths in a lengthy voiceless midsection.  Nothing feels like it’s jamming for jamming’s sake, but more like a well crafted novella with an extremely tight plot.

The Pineapple Thief have been rather prolific in recent years, as if they’re picking up on a vibe from their audience and are now feeding off of that energy.  They already have another two EPs scheduled for release in the wake of Unwound.  The group is riding the crest of a wave in a prog rock revival.  As the 1970s saw a rich culture of underground artists breaking down the doors to better musicianship and increased complexity of composition, the years to come will see The Pineapple Thief at the forefront of a reclamation to these same sensibilities.