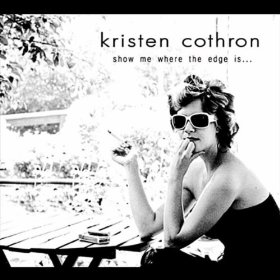 Kristen Cothron – Show Me Where The Edge Is

So, my high school buddy, Dave, decided to move to Nashville a while back.  With 20+ years’ experience as a professional musician and ferocious skills as a drummer and costumed crime fighter (long story), Dave landed a gig playing with local singer, Kristen Cothron.  He floated some of her CDs my way just to see what I thought.  While the recordings were made before Dave joined up, unfortunately, I have to say that I’m digging what I’m hearing, especially her latest, Show Me Where The Edge Is.

Nashville, usually considered the home of country musicians of varying abilities and fortunes, actually presents a wide variety of musical approaches, as you’d expect from a city of that size.  While Kristen hasn’t fully separated herself from the traditional influence that Music City, USA might leave on her, her take on pop music incorporates a fair degree of jazz and the smokier incarnations of sophisticated pop/rock songwriters, such as her idol, Elvis Costello.  Edge, produced by Ben “The Sonic Fedora” Strano, shows Kristen traversing a path that’s more “alternative” than her previous recordings, to great effect.  The thirteen songs on the CD are written, or co-written by Kristen, with the exception of three remarkable covers of the aforementioned Little Hands Of Concrete (that’s Costello, y’all).

Beginning with one of two versions of “Edge To Edge,” the second of which, a more stripped back acoustic take, closes the collection, we’re teased with a Pink Floyd  Animals-era, Rick Wright/David Gilmour synthesizer/shimmering guitar set-up.  As Kristen’s voice is unveiled, we understand that this is her show and she’s going to show off her chops, blending Fiona Apple minor key blues-jazz-isms with trilling Gwen Stefani flourishes at the higher register of her range.  Her command of her instrument (voice) is impressive as the notes roll across our eardrums effortlessly.  She’s a guitarist too, not merely model-caliber window dressing propped up by true musicians.  Intrigued, I let the disc play on.

“Further Than This” hits the speakers next, fleshed out by tasty and tight guitar work and exuberant Hammond B3 and Fender Rhodes.  There’s a thing that I notice about Kristen’s voice here, a thing that I can pinpoint as part of her own, unique style.  She’s quite adept at conveying the illusion that she’s pushing her voice, not straining, but reaching for notes to close out a phrase or a thought, and bringing syllables out in the light just a smidge behind the beat.  This closure is easily attainable by someone with Kristen’s talent, but she puts it off to increase the tension and heighten our curiosity.  This isn’t just someone singing a song, this is someone with a plan to tell us a tale and make sure that we’re sticking with her all the way through to hear how everything turns out.  It’s how you might confuse art with science, because there’s nothing about her music that could be considered happenstance, not unlike Costello’s approach.  “Carefully crafted” are not dirty words, but the description of the work of someone with vision and the means to achieve her goals.

“Maybe It’s You,” a lush, emotional celebration that casts her as an heir to the late Jeff Buckley at times, lets the bass guitar lead the way through the heart-tugging chord changes.  Kristen’s voice dances acrobatically from lows to highs and then in perfect unison with the swell and the build of the band.  The guitar solo leading into the close of the song contains the perfect degree of echo and fuzz so as not to detract from the longing in Kristen’s voice.  This contrasts heavily with “What A View”, decorated by a Dirty Dozen Brass Band-style horn chart (courtesy of The Sonic Fedora) dominating the Hammond, guitar, and percussion backdrop.  I mean, Holy Shirley Bassey!  What ’60s big screen romantic drama was in mind when this was put together?  It’s a total left turn from the rest of the disc and it’s frickin’ phenomenal!

The Costello covers bear mention as well, because, like Kristen, I’m a big fan.  Her takes on “Tart” (from Costello’s 2002 release with The Imposters, When I Was Cruel) and “This Year’s Girl” (from the classic 1978 album with The Attractions, This Year’s Model) are extremely reverent, but done with Kristen’s identifiable stamp placed on them, would easily receive the icon’s blessing.  She can also boast the appearance of Georgia Satellites vocalist Dan Baird on guitar on “Girl”, giving the perfect element of crunchy swamp rock to the piece.  But my favorite of the three is “Town Cryer” (from another & The Attractions release, 1982’s Imperial Bedroom).  Costello has always had an affair with country music, drifting back to the style regularly throughout his career.  “Cryer” delves into the twang with Nashville authenticity, also using The Sonic Fedora’s horn talents in combination with weepy steel guitar to frame Kristen’s heartbreaking delivery.  She may consider this blasphemy, but I think she’s recorded a definitive version of this song, which only goes to show how she’s perfected her craft while embracing variety in her songs’ arrangements.

Dave?  If you’re reading this, I’d like you to know that you’ve done well for yourself, my boy.  You’ve already seen how fierce competition can be for musicians in Tennessee’s capital.  You’ve been hanging with the right people if you’ve ended up playing for Kristen Cothron, because this lady is going places.  You’re the right guy to be sitting at the kit in this band, because I know your familiarity with the styles of music that Kristen appreciates and I know what you’ll be bringing to her sound.  I expect your nights will now be filled with gigs and appearances and you’ll have to hang up your hobby of patrolling Nashville’s rooftops and back alleys under your super hero identity as The Blade.  Who wants to fight crime anyway, when you could be contributing to something as triumphant as what Kristen’s got going on?