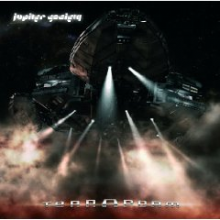 The Jupiter Society is a loose collective of musicians from Sweden led by keyboardist/composer Carl Westholm.  Westhom’s direction brings a revolving cast of characters to interpret the concept behind 2009’s Terraform on ProgRock Records.  While the record will be lumped into the same stylistic category as other prog-metal releases, Terraform heartily embraces music of other genres such as the industrial metal of Marilyn Manson or Nine Inch Nails in combination with the grandiose symphonia of latter- day Pink Floyd and The Alan Parsons Project.  As such, the record plays out more like a demonic rock opera with each song standing alone due to the varying combinations of collaborators.

Vocalist Mats Leven (Therion, Yngwie Malmsteen) delivers one of the best performances found on any record of recent memory on Terraform’s lead track, “New Universe.”  The harsh, robotic voice used to describe the changed world welcoming the singer gives way to a chilling, impassioned scream invoking longing for the life left behind.  Splendid solos from guitarist Marcus Jidell and Westholm are merely flavoring for the glorious ruin defined by the alternately mechanical and smoking determination of the Society.

The meat of the record’s concept is revealed on track two with “Rescue and Resurrection.”  Olvin Tronstad is the vocalist this time out and he’s singing about being pulled from a deathlike state and into a new pseudo-life.  He wails for a return to the peace of death, a state he cannot recall save for the lack of anything, positive or negative.  The song is an epic, the record’s longest, at nearly 10 minutes and is filled with phenomenal and lush synthesizer work recalling Tangerine Dream or Kitaro.  Following along with Terraform’s story, we understand that a planet, including its dead inhabitants, is being brought back to life.  Instead of celebration, a wave of mourning rolls across the zombie-fied orb.  What’s happening is not natural and the tone of the music hints at sinister purposes.  It turns out that the reinvigorated humans are receiving cranial implants that fill their minds with information and a false courage to face the unknown.  Yet their souls cry out for a return to the known, even if the only sure thing is their physical death.

“Into The Dark,” with its somber piano intro, is a plea from the computer implants as they attempt to pull the humans under their total control.  Leven returns to the microphone to evoke the struggle between the fading identity of an animated corpse and the chip removing its memories.  The song is haunting, far from metal, and features only Leven and Westholm with ghostly background vocals by Cia Backman.  Eventually the chip wrests control from the corpse’s mind and preprogrammed thought tugs like a siren’s song calling from a black hole.

On “Terraforming” we begin to understand that these mind-controlled beings are to be the populace of a new, perfect world.  Everything is tightly controlled, no needs are unaccounted for, and even seasons are regulated to remove the rigors of winter.  The dense layers of a synthesized orchestra and the piercing solos of Jidell reveal that deep within the automatons is a spark of their conscience that has not been erased by the implants.  It’s always a remarkable feat when music alone is used to tell a tale.  The Jupiter Society excels at this and “Terraforming” is the best example.

The disc closes with “Beyond These Walls You Are Not My Master” and a stalemate between the beings controlling the automatons and the repressed souls of their hosts.  Tronstad again perfectly assumes the voice of the corpse as he battles against a weakening will to resist and a drive to hide from the computer spirits that can see and feel him.  We’re left to assume that this struggle will remain eternal as the controllers cannot defeat him and the corpse cannot rid himself of the controller’s devices.  It’s a true cliffhanger, but I do trust that we haven’t heard the last of Jupiter Society.

Their story, Terraform being merely part two, could also continue infinitely.  Their take on prog rock can thus evolve into a serialized space opera with subsequent releases, much like records from Coheed and Cambria.  Terraform receives my highest rating due to its remarkable combination of well-acted musical roles and dense, genre-pushing sci-fi storytelling.  Here’s hoping that Jupiter Society returns within the year for another chapter in this exciting saga.