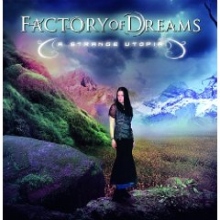 Hugo Flores is a multi-instrumentalist based in Lisbon, Portugal.  He’s a multi-instrumentalist by necessity, that is.  You see, Hugo’s head is filled with many very detailed dreams of distant solar systems, automated replacement of the functions of humanity, and failing experiments related to social engineering.  Hugo has been trying to bring life to these dreams through song and through different musical projects.  The problem is that the dreams come to life at an alarming pace and Hugo must be there to guide these dreams from the corners of his mind and into the world in which he lives.  Each of the projects breathing life to these dreams is named differently from the others, based on Hugo’s collaborators.  Sonic Pulsar sees one configuration, while Project Creation sees another.  Factory of Dreams brings him in contact with vocalist Jessica Lehto.  But behind all of this and the flood of recordings is Flores reaching for any instrument necessary to perfect the new life of his dreams.

Flores has worked with Lehto once before under the name Factory Of Dreams, on their 2008 release Poles.  2009’s meeting resulted in A Strange Utopia, on which Lehto describes Flores’ vision of a seemingly perfect society that actually holds inherent flaws.  These flaws will actually contribute to humanity’s undoing rather than leading towards salvation.  It’s a dream shared by others, but seldom given life as complex as that heard on A Strange Utopia.  Lehto’s voice is rather operatic, and although Factory Of Dreams is often described as having “goth” influence, I suspect this has more to do with Lehto’s choice of wardrobe than with the gloom pervasive on recordings by The Cure, Bauhaus, or Siouxsie and the Banshees.  Utopia is solid prog rock, with metal leanings courtesy of Flores’ guitar sound, and highlighting Lehto’s pure, chilling delivery.  The music has layers upon layers of sound, the best of which are coming from Flores’ guitar amplifiers.  His drum programming and orchestral keyboards are not the best examples of Flores’ virtuosity, but he contributes these performances in order to have more control over the translation of his dreams.

The CD begins with “Voyage To Utopia” and Lehto’s description of an idea, a dream itself, which is really the origin of any city or kingdom.  This idea is becoming real and we are traveling towards it.  The build-up is important as our opening scene is set.  There are problems in this world that must be addressed if we are to bring about perfection.  Flores is in control of the elaborate string arrangement and thundering guitar sounds, all used well to convey the grandeur of the dream.  We begin to understand that these problems can only be addressed if we realistically admit that everything is falling into ruin and we must move on to begin again—elsewhere.

Our search for a place to trigger this new beginning takes us out into the solar system and “The Road Around Saturn.”  As we’re moving through the rings of Saturn, we realize that this new beginning starts not in another position in the universe, but rather within our minds.  This realization actually serves as the passageway to another dimension.  While in this dimension we are able to better understand our inner selves and the destruction we’ve caused, ultimately bringing about a sense of peace within us.  The physical and mental journey is represented through Lehto’s soaring vocals and harmonies alternating with Flores’ ridiculously fast live drums and guitars.

Lehto then describes a walk through a “Garden Of All Seasons” where she’s able to better understand the differences between this perfect place and the impending destruction back at her home.  She realizes that she must allow this destruction to occur while humanity undergoes a transformation into a race of mechanical beings able to withstand the crumbling society.  Only following these chaotic events will mankind actually rise to become the perfect being with the perfect orderly social structure.  She also glimpses a “Dark Utopia,” but the lines between her vision of perfection and that which is being destroyed begin to blur.  Which one is truly the “Dark Utopia”?

The chaotic destruction ensues and is met head on with the determination to force an orderly outcome.  The world and all we know fall into ruin through natural disaster, but a plan has been hatched to allow our race to survive.  Everything changes around us until the destruction itself begins to be destroyed.  What’s happening is referred to as “Destructible Destruction” on a song containing some of Flores’ most impressive playing and a dense construction of dark, echoing synthesizer sounds.  The song ends abruptly and is replaced by the epic “E-Motions” on which we see what humanity was forced to do to prevent such chaos from ever threatening us again.  We are now machines, “organic robots,” with our feelings, thoughts, motives, and even our dreams pre-programmed to keep us orderly and harmless.  Our dreams of perfection have been realized, but at what cost?

A Strange Utopia is likely not the last collaboration between Flores and Lehto.  And while the insular nature of the recording, and its lack of interplay between other musicians, can contribute to the machine precision necessary for part of the story, I would love to see them either expand their roster of contributing musicians or bring in others for additional input into the structure of the project.  There are a few guests on the CD, most notably Kansas’ David Ragsdale who contributes stunning violin parts on two songs, but Flores might just realize that his dreams can be described much more accurately if he can share them with like-minded musicians before proceeding on a project that grants them immortality.  Ultimately, A Strange Utopia is a very rewarding release, but it also leaves the listener craving an even bigger, more perfect concept next time around.