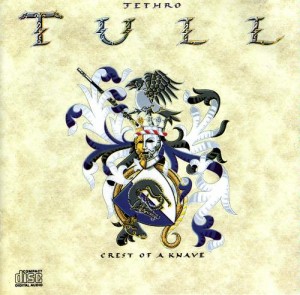 Jethro Tull – Crest Of A Knave

I’ve finally added an album to my collection that contains some historical significance for all music fans, not just longtime Tull fans like me.  You see, 1987’s Crest Of A Knave actually won the Grammy for Best Hard Rock or Heavy Metal Performance, defeating the album that was considered a shoe-in, even by the members of Jethro Tull and their record label at the time, Chrysalis, Metallica’s …And Justice For All.  I was big on both records, having recently discovered speed metal and having followed Tull since I was in grade school.  But frankly, in retrospect, there are significant problems with both albums that should have prevented either from receiving Grammy honors.  The better hard rock album of the two is clearly Metallica’s, but that’s because I wouldn’t, even on the angriest of days, consider any of Jethro Tull’s albums to be “hard rock,” and definitely not “heavy metal.”  So, what makes this record historically significant is that it’s Exhibit A that the National Association of Recording Arts and Sciences is a complete pile of crap and they don’t really take on the responsibilities that you’d expect an organization wielding such a name to assume.  They want to tell you which records are the best, but they don’t really even care.  Taste is subjective, so make your own judgments, and ignore the Grammys.  If you’re going to buy Jethro Tull albums, do it because you like Jethro Tull music, not because they were handed this dubious award.

That being said, Crest Of A Knave is a solid Tull album, fitting comfortably alongside other ‘80s, synthesizer-driven albums from the group, now consisting of vocalist/flautist/acoustic guitarist, Ian Anderson, lead guitarist, Martin Barre, and bassist, Dave Pegg.  My failure to pick this one up sooner than 2014 is embarrassing, so I’ll try to make amends by offering a more accurate description than the one offered by NARAS.

Starting way back in 1979, Ian Anderson had started toying with the idea of abandoning the name “Jethro Tull,” largely because his own musical ideas were beginning to conflict with what he himself considered to be the band’s sound, and also because the line-up of that band was changing significantly.  Programmable synthesizers seemed to offer a solution for replicating keyboard parts in the live setting for both of the departing keyboardists, but Anderson’s sound experiments led to those synthesizers contributing sounds that were not familiar to longtime Tull fans.  What to do?  Those of us that stuck by the band through this time realize that Anderson just embraced the change, as did the band’s fans, but the group’s widespread appeal began to diminish.  Fair weather fans took a pass.  Nearly a decade on, and following a three-year gap since the previous studio album, Crest Of A Knave was released to mixed reviews.

“Steel Monkey” leads the pack of 10 songs listed on the 2005 EMI CD version, which includes the bonus cut “Part Of The Machine,” not found on the original vinyl.  If you didn’t know this was a Jethro Tull song, that likely wouldn’t be your first guess as “Steel Monkey” gets swinging.  The electronic rhythm track, while gelling nicely with the lower register of Anderson’s voice and Barre’s strangled solos, probably felt very modern at the time, but now just sounds dated.  This kind of update was also applied to contemporaries such as Dire Straits and ZZ Top to similar effect.  Great music was created by all of these artists at this time, but most of the organic pulse was sacrificed in order to do so.  And yet underneath it all are Anderson’s insightful lyrics discussing, of all things, construction workers.  Despite the electronics, Anderson’s charisma permeates and draws us in deeper.

“Farm On The Freeway” follows, and continues Anderson’s preoccupation with American blue collar workers.  This time the focus is on the common landowner’s dilemma.  When the land itself is the single most valuable thing that the famer owns, is it wise to sell in order to increase one’s personal wealth?  Questions of birthright and what constitutes true ownership burrow to the surface amidst Anderson’s recitation of the line, “Now all I got left is a check and a pickup truck.”  This is the kind of writing that has kept Tull fans engaged for decades – outstanding!  The electronics are held in check as well, helping to emphasize the philosophical battle being waged in the protagonist’s mind.  “She Said She Was A Dancer” provides one more example of the way Anderson tames his lyrics to introduce us to fascinating characters that we’ll never hear from again.  This time, two flirting drunks dance around each other, and the truth, over cocktails.  Their conversation reveals only what they’d like uncovered, leaving far more questions than answers as the couple bid their adieu at the song’s end.

“Mountain Men” also starts us down a path of serious reflection, this time about modern warfare.  There was a time, decades and centuries past, when enlisting in Her Royal Majesty’s service was a romantic and adventurous proposition.  But as the world grew smaller, and the lives of its citizens across the globe were shown to be more similar than first believed, we need to ask if that noble service to the crown was truly right.  The song’s protagonist has some nagging doubts as to whether he was actually in service to God and Country, or someone else’s business concerns.

The original release closed with another lyrical topic familiar to Tull fans – a train.  “Raising Steam” draws parallels to a locomotive building energy and someone heading out into the world to accomplish a dangerous set of tasks.  Anderson’s positioning of technology amidst dusty, grimy workers sets the tone, encouraging use of society’s advancements and cautioning us on its cost.

There’s nothing all that exceptional about Crest Of A Knave, aside from the fact that it’s the 16th studio album from a band with a number of excellent studio albums.  Knave will not leave the listener with the same sense of awe that follows exposure to Aqualung, Minstrel In The Gallery, or even the criminally overlooked Songs From The Wood.  In fact, it’s that “woody” sound, accomplished only with the use of acoustic instruments and analog technology, for which Jethro Tull is best remembered.  We can therefore forgive Anderson, Barre, and Pegg for trying something new in an attempt to steer clear of being pigeon-holed.  The performances, lyrics, and vocal delivery will always be excellent, whether given NARAS acknowledgment or not.