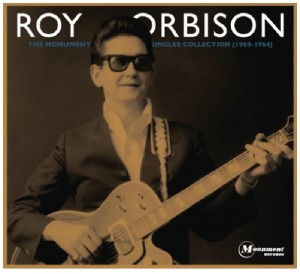 I don’t usually take the time to write about greatest hits packages.  It’s not that I don’t like them, but it’s more like “here are all the songs you might possibly know by this artist” – big deal, not much of a story.  But I’ll make an exception to that rule if there’s something very outstanding about the package.  As I’ve been writing about the legendary Roy Orbison lately, it feels like the right time to tell you about one of those extraordinary packages.  The Monument Singles Collection (1960 – 1964) was released in 2011 on Sony’s Legacy label in celebration of what would have been Roy’s 75th birthday.  A two-CD, one DVD set, it collects Roy’ biggest hits of his career, which coincided with his stint at Fred Foster’s Monument label.  Disc 1 collects all the A-sides from this period, while disc two corrals the B-sides, very orderly and also (mostly) chronologically.  The DVD is a real treat, as it features concert footage of Roy in his heyday (such footage is typically under ownership by European companies), tearing it up in front of a gymnasium full of Dutch fans as presented on the television show, Combo on March 25, 1965.  To top it off, the package includes a booklet listing production credits, recording dates, release dates, chart positions, and musician credits for each track.  Let’s dive in and give a closer listen to the material.

As you may know, stereo recordings were in a theoretical development stage in the early ‘60s, so mono recordings were really the only way to go.  There had been problems in trying to adapt mono recordings for stereo systems in the past, which sometimes drastically altered the sound of the mix.  Instead of making that same mistake, Sony presents these recordings in stunning mono!  Flatter than stereo, true, but this is the way we remember these songs to sound, so why mess with perfection?

Disc 1, the A-sides, runs down an incredible list of 20 singles of varying success, all remarkably sung by our hero from Wink, Texas.  Leading off with “Uptown,” the rockin’ country shuffle featuring the unmistakable Floyd Cramer tickling the ivories, we’re reminded that such a string of hits is really only attributed to a few artists in rock history.  Think of “Blue Angel”, where Cramer is joined by another legendary session performer in Boots Randolph, their sax and piano add flourish while Roy takes a breath, the gorgeous string arrangement sighing behind them.  Or the chilling “It’s Over,” Roy’s plea for acceptance of the reality of a lost love.  The song, like so many others by Orbison, allows the listener to paint their own picture of a man on the verge of breaking down, lending cinematic characteristics to pop songs.  While Roy’s penchant for this kind of romantic drama is evident, what’s also on display is the sheer variety of these singles.  From rockabilly to ballads, from up-tempo blues to lusty, sexy lion growls, Roy liked to mix it up, and all of us benefitted from his flexibility, talent, and sense of humor.

Disc 2, the B-sides, is where we really start to learn about this material.  I was unfamiliar with all but a handful of these tunes, so it felt like I was privileged to crack open a vault containing hidden treasures when first giving a listen.  But those wise souls who bought the singles on 45 rpm,  50 or so years ago knew these songs all too well.  Great finds for me include “Here Comes That Song Again,” the flipside to 1960’s “Only The Lonely”.  I often wonder if a coin toss decided which song became the single and which the B-side, because “That Song Again,” with Boots and Floyd and the strings, and similar sad guy lyrics, could have instead climbed to #2 had that coin flipped otherwise.  Dig also Roy’s take on the Gene Pitney swinger “Today’s Teardrops,” originally backing “Blue Angel” in 1960.  Some of the musician credits are missing here, but the song includes wicked, little sax and guitar solos in a very perfectly produced attempt at another hit.

That “Summer Song,” backing the non-charting single “Lana,” in June of ‘61, was not chosen as the A-side is a complete mystery to me.  Roy may have been trying to diversify his output to radio, but “Summer Song” ranks right alongside “It’s Over” and “Crying” when it comes to his brand of big-stringed sadness.  Monument followed the flop quickly with what became a double-sided single in “Crying/Candy Man” later that month.  Both songs remained fixtures of Roy’s live set until his death, and definitively proved that Roy’s B’s were almost as good as his A’s.  A conundrum is found later on the disc in “Distant Drums,” listed as the B-side for both 1961’s “Let The Good Times Roll” and 1963’s “Falling,”  As “Distant Drums” wasn’t recorded until 1963, I question the accuracy of the package’s archivists, but that’s neither here nor there.  It’s a neat song, and I could agree with Monument’s decision to use its military parade through the tropics sound on two different releases, if that’s how it actually happened.

“Only with You,” paired with “Goodnight” in January of 1965 was, I believe, the last single released by Monument.  Roy’s delivery is strong, but I detect that both he and the musicians had fallen victim to formula, hence the single’s failure.  And that may have been what marked the end of the relationship between Orbison and Monument, that it’s damn hard to hop off of the big hit treadmill to walk a different path for a change.  Some spice to the mix could have kept the artist-label bond stronger, but alas, it was not to be.  A couple of other songs to marvel over are found in Roy’s take on the Stephen Foster classic, “Beautiful Dreamer,” the B-side to 1963’s “Pretty Paper.”  This is Roy in full-on crooner mode – a lullaby more gorgeous than the sappiest songs in his catalog.  Roy also made an attempt at popularizing a new dance craze in “The Bug” released alongside 1959’s “Paper Boy.”  Alright, it wasn’t quite up to the standards of “The Twist,” and sounded a heck of a lot like “Splish Splash,” but it’s a fun nugget to unearth.

Lastly, we turn to the DVD content.  Although only 25 minutes in length, Roy and his band crank out 9 songs in that time, and apparently held scores of Dutch teenagers in rapt attention throughout.  This isn’t a full run-through of the set, as it’s edited to list song titles before the performances, and spends quite a bit of time ogling the expressions of the subdued audience.  Understand also that Roy and his band considered themselves to be highly professional, so you won’t see anyone going off the rails and busting into a flaming guitar solo or anything.  The band is tight after playing these songs hundreds of times, and it’s evident that the set didn’t vary from night to night.  With that in mind, it’s pretty damn cool to hear Roy work his way through Ray Charles’ “What’d I Say” with such a solid rhythm section behind him.  You can also just about see the goosebumps rising when the band brings it down low during “Dream Baby.”  And Roy won’t leave until he’s brought a chill with a heart-stopping rendition of “It’s Over” and a rousing “Oh, Pretty Woman” with goofy-looking, but vocally sound keyboardist, Bill Dees lending harmonies.

In the 21st Century, this is the way to best enjoy these blasts from the past.  The only way to do it better would be to take your turntable with you in a time machine so you could seek out the original 45s and hear them in the context in which they were released.  Yeah, I’m fresh out of time machines too.  Therefore, you and I can instead thank Sony for presenting so much more than another run of the mill “best of” set.  I think I’ll go give these another spin, this time in celebration of Roy’s, what would it be, 78th birthday.  Cheers!