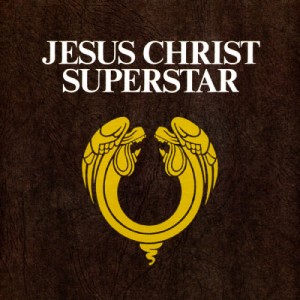 Taking a look at my calendar and then outside…then back to my calendar, and things don’t seem to jibe.  Winter will never end in Wisconsin despite our dreams of a spring thaw.  So, we think warm thoughts and try to remember what spring was all about.  We turn to our record collections for something to take our minds off of the latest snow event.  Let’s see, the next holiday coming up is Easter.  Easter?!?  I’m going to have a tough time finding an album with an Easter theme, but I’ve succeeded, and it’s a cracker!  The season means different things to different people.  To some, it’s the promise of the return of a savior.  To others, it’s ducks, bonnets, bunnies, and plastic grass.  To the unfortunate, it’s a time to stock up on allergy relief medication.  Jesus Christ Superstar is an album that nods to the first group’s version of Easter, which is great because an album’s worth of sneezing or quacking wouldn’t allow for a very favorable review.

21-year old Andrew Lloyd Webber and 25-year old Tim Rice had a brainstorm.  They wanted to create a “rock and roll” musical that told the biblical story of Jesus Christ from the point of view of his betrayer, Judas Iscariot.  But they didn’t have the funds for a full stage production.  Right!  Jesus…Judas…rock musical.  And these dudes were in their 20s?  It’s all true, including their plan to record the musical as an album in the hopes it would lure funding for a bigger production.  Some pooh-poohed the idea, but who’s laughing now?  Certainly not Webber and Rice’s bankers!  And so it began, the casting and preparation of what could easily have turned out to be a huge waste of time and money.  But they did find folks at Decca Records to be game, and the details began to solidify.

To the fella in our audience that’s wise-cracking about me reviewing a recording of a musical for a classic rock website: Read on, brother!  You’re about to be shocked!  What I mean by that is that the works of the cast and primary musicians on this record are VERY well-known to fans of classic rock.  The album lists their names on the back cover credits, and in the beautiful 28-page libretto included in the record’s original packaging, but only a few of them are easily recognizable.  First up, the role of Christ himself, and this is where you get your first shock, is played by none other than Deep Purple’s eardrum-busting lead vocalist Ian Gillan.  And don’t scoff, Purp fans, this is seriously one of the best things Gillan has ever lent a scream to.  The tale’s villain and observer, Judas, is played by none other than Murray Head (yes, the guy who sang “One Night In Bangkok” for the musical Chess by Tim Rice and Benny and Bjorn from Abba).  Jesus’ companion and confused love interest, Mary Magdalene, is played by Yvonne Elliman, who had a Top 40 hit with a song from the record, the ballad with a double meaning, “I Don’t Know How To Love Him.”

So far, the only rocker on board is Gillan.  Read further to find that the part of King Herod is played by Mike D’abo, who was the second fellow to serve as the lead vocalist in the band Manfred Mann, and sang lead on “Mighty Quinn.”  Victor Brox’s turn as Caiaphas is maybe the biggest surprise.  Not only is his performance spectacular and edgy, he was moonlighting from his job as a premier British blues singer, second in popularity (but not delivery) only to John Mayall.  The part of Simon Zealotes brings another surprise as it’s ably handled by Johnny Gustafson, a well-established bass player who’s done stints with the Ian Gillan Band, and Johnny Kidd and The Pirates, but is best remembered for delivering the goods on Roxy Music’s “Love Is The Drug” later in the decade.  The best surprise, as far as the vocalists go, is saved for last.  The part of the High Priest was played by a guy named Paul Raven, which was one of the first stage names used before he became famous (and then very infamous) under the name Gary Glitter.  No kidding.

This was supposed to be a “rock musical,” so alongside the orchestra were a few musicians who knew exactly how to rock out.  There was a core group of musicians featured throughout the recording, as well as dozens of support musicians and background vocalists.  That core group may also be remembered as Joe Cocker’s Grease Band: Neil Hubbard and Henry McCullough on guitars, Bruce Rowland on drums, and Allan Spenner on bass.  Keyboards were provided by Peter Robinson, who’d done work later with Brand X and some Genesis side projects, as well as Bryan Ferry and Stealer’s Wheel.  All in all, their performances are great, despite the inability to improvise on the score.  It’s a bit difficult to pick out exactly who plays what, and that’s further complicated by the laundry list of extras in the studio.  Amongst the better-known are British jazz bassist, Jeff Clyne, future Soft Machine alumnae, Karl Jenkins on piano and John Marshall on drums, and veteran guitarist Chris Spedding.  The “rock” elements sound somewhat dated at times, but quaintly so.  I blame Webber for this, not the musicians, as he seems to have composed in the style of the time, rather than attempting to craft something more timeless.

It’s not really necessary for me to break this record down by specific tracks.  This is a full story, subdivided into 23 segments, which happen to be individual songs.  Much of it won’t make sense when taken out of context, so you’ll really want to listen straight through.  And, don’t worry about needing to be religious in order to understand, or in sensing sacrilege at some of the elements if this story is part of your faith.  One thing that Webber and Rice tried to do, successfully so, is to make the story something that anyone regardless of religious affiliation can appreciate.  Stodgy, old church-goers with an absolute adherence to the precision of ritual weren’t the target audience anyway, and there’s likely none matching that description reading this blog.  This is the story of “the Passion of Christ,” which is probably fairly well-known to even the heathens amongst us (Heathen #1 is the guy typing this blog entry).  No one’s trying to convert anyone to a set of beliefs here; they’re just trying to tell a familiar tale from a different point of view and in a very unique manner.

2012 saw an updated reissue of this album.  I haven’t heard it so that I can make a comparison, so I’m relying on my 1970, double album vinyl copy for the details.  I’m not sure if that re-release was some sort of 42nd anniversary deal, or what, but I’m glad to see that the music is still available and is getting the clean-up treatment.  I do wonder if a younger generation can appreciate the music as I did, but I hope they’ll give it a listen.  Besides, what else are you going to listen to when it’s almost Easter and you want something “seasonal.”  Well, more seasonal than the snow, or ice rain, or wayward polar vortex is making it feel outside, that is.