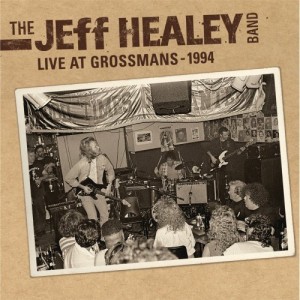 By the time Jeff Healey and band mates Joe Rockman (bass) and Tom Stephen (drums) returned to Toronto in 1994 for a two-night gig at Grossman’s Tavern, they were a well-known recording and live outfit. Healey had captivated and thrilled audiences with his “lap-style” guitar technique and also scored a big hit with “Angel Eyes.” So Healey and crew got down and dirty, doing what brought them to the dance in the first place, unleashing a torrent of nine blues/rock covers that showcased a band at the height of its powers. Along with guests Pat Rush (guitar) and Michael Pickett (harmonicaphones), the JHB tears through songs by Ten Years After, Howlin’ Wolf, Robert Johnson, Elmore James and Bob Dylan, taking each to new levels of intensity. The sound is excellent, the energy undeniable and the playing astounding. It’s hard to believe that the savage retelling of The Beatles’ “Yer Blues” was the band’s first time performing it live. I can only imagine the vibe coming from the stage as the monstrous main riff roared through the guitar amps. James’ classic “Dust My Broom” never sounded so big, and Healey takes Jimi Hendrix’s stance on Dylan’s “All Along The Watchtower” and then runs wild with it across the Great White North. For some reason, Healey is rarely mentioned with the great blues guitarists such as Eric Clapton, Peter Green, Stevie Ray Vaughan or Hendrix. He should be.