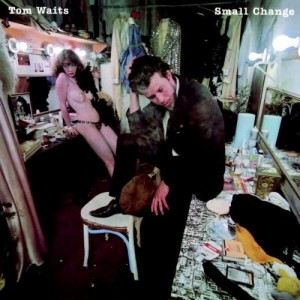 Tom Waits’ 4th album, 1976’s Small Change, is one of the best-selling releases in his catalog.  I wouldn’t be surprised to find that this has something to do with the appearance of the near-nude cover model/go-go girl/stripper (rumored to be Cassandra Peterson, aka Elvira), but there’s no doubt that Waits’ own material discussing dead criminals, drunken sprees, and the “charm” of skid row, all heavily researched by the artist in the romantic notion that there is a kind of nobility in drunkenness, was the actual key to the record’s staying power.  Now available on heavy duty 180-gram vinyl, Small Change deserves further examination as we gaze at the career of an artist verging on stagnation and an eventual, dynamic rebirth.

Side one of Small Change contains two songs that became fan-favorite staples of Tom Waits’ live set, “Tom Traubert’s Blues” (with its “waltzing Matilda” refrain) and “The Piano Has Been Drinking.”  Both songs serve as reinforcement for Waits’ alcoholic romancing and crushed dreams themes, but they sandwich a couple of tunes that are even more interesting.  “Step Right Up,” for which fans could send away to receive the actual lyrics by mailing a self-addressed, stamped envelope, a picture of themselves, and two dead creeping charlies to the Tropicana Motor Hotel in care of “Young Tom Waits,” is a free-spirited scat exercise to a sturdy jazz rhythm courtesy of longtime bassist Jim Hughart and veteran drummer Shelly Manne as tenor sax legend Lew Tabackin solos spicily throughout.  The song proves how Waits’ skills had developed to include effortlessly wild improvisation.  “Jitterbug Boy” follows with a man describing himself in legendary and fictitious terms as he debates whether to blow out of town or let go of the light post and head back inside for another drink.  The likelihood of him sticking around to talk to the listener, and perhaps reveal the truth of his background, is mighty slim.  We’re better off believing his tales of watching the Brooklyn Dodgers playing at Ebbets Field and sleeping with Marilyn Monroe.  Waits and his piano are all that’s necessary to conjure up yet another fable of salvation in a bottle.

Equally seedy morsels are sprinkled over side two.  “Pasties & A G-string” is just Waits and Manne paying tribute to a man and his addiction to the ladies employed by the peep shows and strip clubs of their mythical scumbag haven.  Manne is holding down a beat that allows Waits to serve up his snappy, scattin’ patter sans melody.  “The One That Got Away” is a “celebration” of loss and the worry about what’s to come.  Backed by Hughart and a brilliant solo from Tabackin, Waits unleashes some of his best poetry: “Jim Crow’s directing traffic/with them cemetery blues/with those peculiar looking trousers/and them old Italian shoes/the wooden kimona was all ready/to drop in San Francisco bay/but now he’s mumbling something/all about the one that got away.”  Hip-hop MCs would give their firstborn to have rhymes like that in their repertoire.

The album’s title track has Waits delivering a monologue that only occasionally slips into tunefulness.  While Tabackin wails mournfully beneath, Waits recites the saga of a dead thug lying in the street.  As important as the nature of the killing (Small change got rained on with his own .38”) is the tapestry surrounding this urban funeral parlor.  Where the burglar alarm’s been disconnected, and the naked mannekins with their Cheshire grins look on while the newsboy walks off with the dead man’s pork pie Stetson hat, Waits hovers above as a black robed angel with omnipresence and a pack of Luckys rolled up in his sleeve.  The song’s the pinnacle of Waits’ neutral observance with a be-bop soundtrack and an unhealthy knowledge of people stumbling into and wallowing within the grim confines of their worthlessness.  In short, this is what longtime Waits fans remember to be his best material from the ‘70s.

Waits recognized how he was sliding ever closer to being swallowed up by the sordid pocket of humanity that he chronicled so well and he soon began to pull himself out of the gutter before it was too late to turn back.  Yet his affection for the losers and the damned remained the basis for his lyrics despite a change in his musical approach to sophisticated minimalism in the 1980s.  Before the neo-industrial stomp and clank of his releases on Island Records, Tom Waits crafted a persona as a piano bar balladeer who happened to be a not so distant cousin to the slime balls he celebrated.  Small Change is perhaps the best place to discover how it all began and is definitely a record that makes a valiant attempt to hold a mirror before both artist and listener to show everyone the family resemblance.