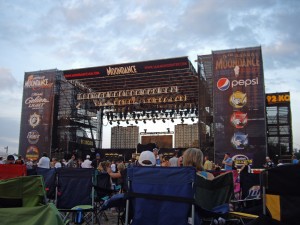 Walker, Minnesota, was the place to be Friday July 15. This was Day 3 of Moondance Jam 2011, and the music lineup was superb. Five acts took the main stage throughout the day, beginning with Van Morrison tribute Belfast Cowboys followed by The Outlaws, Eddie Money, Paul Rodgers and finally ending with Kiss.

The Belfast Cowboys are a Twin Cities-based outfit with a large horn section. As you would expect, the ‘boys played Morrison’s biggest hits including “Moondance” and “Gloria,” but the real highlights were on the joyous numbers, “The Bright Side Of The Road” and “Jackie Wilson Said (I’m In Heaven When You Smile)” with its cascading horn lines. A solid set from a polished band. 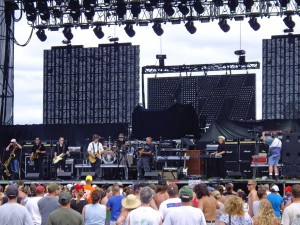 The Outlaws came on next and blew the place apart. This was an old school guitar barrage that you don’t see much anymore. Lead slingers Billy Crain and Chris Anderson traded licks and extended solos across tunes including “There Goes Another Love Song,” “Grey Ghost” and, of course, “Green Grass And High Tides.” Crain and Anderson are monster musicians and it was intense and awesome to watch them play. Henry Paul was in excellent voice and did a great job keeping the energy and the audience at a fevered pitch. During “Green Grass And High Tides” a guy standing next to me, who couldn’t stop dancing, looked over and asked, “Do you know this song?” I said, “Absolutely!” He told me that he was here just to see The Outlaws and wondered who could follow them after this amazing performance. An encore of “Ghost Riders In The Sky” brought the set to a fitting and exhausting conclusion. I can’t say enough about The Outlaws’ performance. Everyone in the band seemed to be having a blast, especially drummer Monte Yoho, whose face wore a permanent grin from the first beat to the last. 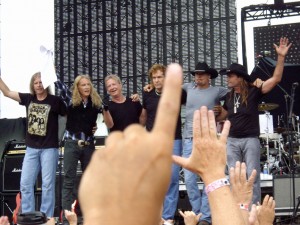 The first rock concert I ever saw was in 1978 at Cincinnati’s Riverfront Stadium. My parents took my brother and me to see Eddie Money, The Steve Miller Band and The Eagles. Here, 31 years later, I was seeing Eddie Money again, for just the second time. Money seemed genuinely appreciative to be singing and playing (the Money man plays a mean sax, if you didn’t know) all these years on, and he played a set of fan favorites including “Baby Hold On” “Think I’m In Love” and “Two Tickets To Paradise.” Money capped the set with “Shakin'” and had everyone in the audience doing so. A friend who was at the show with me commented about how many hits Eddie had that you tend to forget about. He’s also pretty funny and was hamming it up all the way. 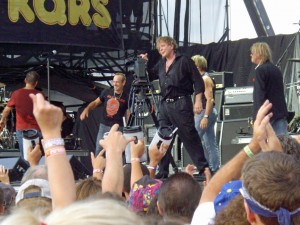 Paul Rodgers was next, and the performer I was most looking forward to seeing. It’s incredible to hear Rodgers today and how pure his voice sounds compared to his early days with Free and Bad Company. He seems incapable of singing a bad note, and his vocals have such strength and presence that it’s hard to imagine he’s now past 60 but sounding better than ever. Rodgers’ set leaned heavy toward his Bad Co catalog, delivering the goods on “Can’t Get Enough Of Your Love,” “Run With The Pack,” “Ready For Love,” “Seagull” and “Feel Like Makin’ Love.” Throw in scorching versions of “Bad Company,” “Mr. Big” and “All Right Now” and it was nirvana. Fantastic show and another supporting act who could headline any gig. 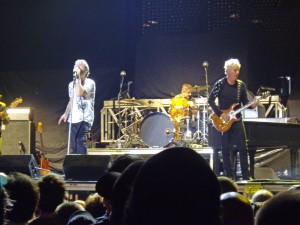 Finally, the announcement came for “The Hottest Band In The World,” and Kiss took the stage with a fury. I last saw Kiss during the reunion/Psycho Circus days, with the original four band members playing a show in Dayton, Ohio. It was an indoor gig and one of the most amazing concerts I had seen. But that was a firecracker compared to the volcanic eruption that was on display outdoors at Moondance. Beyond a couple tracks from Sonic Boom, the set list was classic Kiss – “Deuce,” “Firehouse,” “Cold Gin,” “Black Diamond,” “Calling Dr. Love,” “I Love It Loud,” “Detroit Rock City” and more. I was very impressed by Eric Singer’s drumming and singing, as well as Tommy Thayer, who put their stamp on “Beth” and “Shock Me,” tracks originally performed by Peter Criss and Ace Frehley. It’s almost impossible to describe the stage show and the sheer amount of pyrotechnics, lights and confetti that were let loose during the show. It was bigger, louder and beyond anything that I had ever seen. At one point, there was so much confetti streaming through the air that it looked like a blizzard had taken over the grounds. Then there was more fire, lights, smoke, and more lights. I took a bunch of photos of Kiss and the rest of the Moondance bands from Friday. See my SmugMug gallery for more Moondance Jam images. 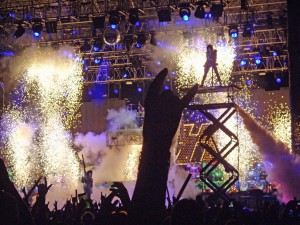