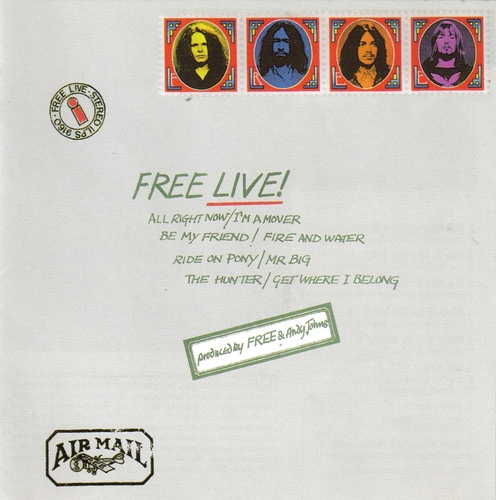 Some bands are just too damn good to last.  Such is the case with Free, whose teenaged members possessed skills well beyond their years, but whose lack of maturity prevented them from recognizing the phenomenon growing around them.  Less than five years after their formation in 1968, and after a handful of moves in that direction, Free finally disbanded, leaving a wealth of studio recordings, one worldwide mega-hit, and an amazing live recording titled, not coincidentally, Free Live!  Originally issued in 1971 during one of those –not-yet-final breakups, the album contained seven killer live tracks and one studio track (it was very common in the 70s for bands to stick a studio recording at the tail end of their live record).  Through the magic of modern remastering techniques, the 2002 Island/Universal CD release allowed six other rescued live recordings and an alternate take of the studio track to see the light of day as well.  It’s this version of Free Live! that I recently purchased and on which I’d like to comment.

If you’re unfamiliar with the song, “All Right Now,” you’ve obviously been living under a rock with no access to a radio for the last 40 years.  Go back to your cave; I don’t want to know you.  For those of you breathing fresh air on a daily basis, you’ll be glad to know that Free Live! contains two versions of the chart-topper.  The first, a show opener from a gig in Sunderland, and the second, from a couple dates later in Croydon, are actually far from the best things included in the package.  I can blame this on my own familiarity with the studio version – I’m a little bit put off by the modified arrangement (different drum fills, Paul Rodgers’ vocal fills running over the top of guitarist Paul Kossof’s time in the spotlight, etc.).  Good takes, definitely, but the true measures of the band’s talents are found elsewhere.

For a good sampling of what each of the band’s members could bring to the show, check out the Paul Rogers/Andy Fraser original, “I’m A Mover.”  It’s a heavy blues, as are most of the songs in the band’s catalog, set up by a rock solid groove courtesy of Kossoff, bassist Fraser, and drummer Simon Kirke.  Rogers is in full Steve Marriott mode, confounding the listener as to both the ethnicity and age of the singer.  Fraser, the true secret weapon of the group, sees his bass prominently on display in the mix, while Kossoff is freed to deliver some of the nastiest, tastiest guitar riffs to which he’d ever been given credit.  The guitarist’s finger vibrato technique set him on par with Blue Cheer’s Leigh Stevens, but his raggedy soul emerges in ways that the San Francisco trippers’ bash and conquer approach would not allow.  Kirke hangs tight in the pocket, demonstrating why he was in demand for both Kossof’s and Rogers’ post-Free ensembles.

Skip on ahead to the live version of Fire And Water’s title track.  While the band tended to focus on earlier songs for their live repertoire, this recent release was easily within the heavy blues-rock style favored at the band’s formation.  It’s here that we notice some of the elements that Rogers would employ while fronting Bad Company a few years later.  Although written by the Fraser/Rogers combo, it’s one Mick Ralphs lick away from something on Swan Song Records and a couple of years ahead of Ace Frehley’s early KISS input.

The true standout cut is a full band composition called “Mr. Big,” which is thankfully also represented by both the Sunderland and Croydon performances.  Towards the end of the song, Fraser and Kossoff are soloing simultaneously, perhaps acting out the growing resentment Kossoff had for the younger, more sober Fraser.  If you want evidence that Fraser should be included on any Top 10 list of bassists from the classic rock era, it’s all right here.  Kossoff’s notes become pleasingly tangled and mangled while holding the song’s structure behind Fraser’s drilling tones and occasional bass chords.  The song should also have been an album rock radio staple, but it’s now just left for we rock historians to unearth and marvel after.

Two other things worth mentioning – the song that really sent the crowd into a frenzy is Free’s take on Albert King’s “The Hunter”, which had been a well-known inclusion on their set list for quite some time.  Also, the studio track, “Get Where I Belong” is an acoustic guitar-driven folk/country waltz in 6/8 notable for Rodgers’ beautifully expressive voice.  It’s another one of those “shoulda been a hit” moments of which Free had too many.

So Free finally broke up after first trying to bring things back together in the hopes they could save Paul Kossoff from his worsening heroin addiction.  Fraser and Rodgers’ rivalry and notions for the band’s future direction prevented this plan from being successful.  Add in Kossoff’s increasing feelings of being a mere sideman and Fraser’s place in the middle, tiring of Rodgers and chastising Kossoff for inconsistent performances, sealed the band’s fate.  But Free Live! proves that this band, at the height of their career, were a tighter ensemble than the Rolling Stones or Led Zeppelin during the same years.  It would be extremely unfortunate if history didn’t remember them that way.  Do us all a favor, rock fan!  Educate yourself on the merits of Free, so they don’t remain relegated to the ranks of the also-rans and wannabes.  They’re undeserving of that unkind fate.