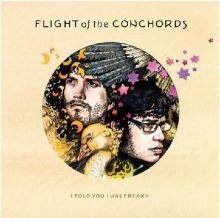 Flight Of The Conchords are a musical comedy duo from New Zealand that are best known for their two-season series on HBO.  The premise behind both the band and their TV show is that they’re a folk group trying to pull themselves from relative obscurity in NZ to world conquest with a base in NYC.  While their debut release featured songs that had been road-tested for nearly 10 years, I Told You I Was Freaky comes directly from writing for the TV show, both musical and episodic.  As you might imagine, the concepts are not as solidly developed on Freaky, yet the bits are still hilarious.  What should be of interest to readers of ClassicRockMusicBlog.com is that comedians Jemaine Clement and Bret McKenzie are not merely passing themselves off as musicians.  The songs on Freaky and its predecessor, Flight Of The Conchords, are written and performed by the duo themselves with only occasional appearances by other musicians and comedians.  The songs are not only ridiculous and blasphemous on several levels; they also exhibit an understanding and love of many styles of music, from hip hop to reggae to folk, and yes, to classic rock as well.

If you weren’t familiar with Flight Of The Conchords before reading this and you’re now imagining that they’re sort of like Spinal Tap for the cultural mash of the 21st Century, then you’re starting to get the drift.  Just as Spinal Tap focused on a washed up, never was band of metal heads that began (like many classic rock and metal bands) as a hard hitting bunch of R&B rockers that morphed through flower power before settling into their role as obliviously sexist failures, Flight Of The Conchords are similarly washed up before they could get started and experimental with types of music that will command an audience of new followers.  As artists trying to create a believable yet totally false history of a non-existent group, they’ve got to be able to write, play and sing the material.  Spinal Tap “existed” for one movie, a handful of records, and only a few live performances.  Flight Of The Conchords are currently touring Europe, even though their TV show will not return and future Conchords projects are left somewhat in limbo.  And just as the actors participating in Spinal Tap are seen in many, many TV shows and films outside of that project, Clement and McKenzie have also been seen separately in numerous movies and TV commercials.  The biggest difference between Tap and The Conchords is that the kiwi outfit puts infinitely more into their music than Tap ever did.  The songs are funny, yes, but the project is absolutely serious.  Here are some examples:

Take a song titled “Sugalumps”, which is about, well, how sexy a guy’s testicles are, and set it to an early ’80s electro rap backing.  If you get the sound exactly right, the music fans hearing the song are laughing at something else besides “the ladies” that “hustle to ruffle my truffles.” Bret and Jemaine and producer Mickey Petralia obviously labored over the synthesizer programming to get it to sound perfectly stinging and primitive.  The sing-song rap style of both The Conchords and guest Arj Barker (the TV show’s scummy and delusional pawn shop worker/advice lending buddy) and the urban sweetness of the singing on the chorus, “All the ladies checkin’ out my sugalumps” and you’ve set the stage for not only great comedy, but also dead-on homage.

The Conchords also take a poke at Outkast on the cut “We’re Both In Love With A Sexy Lady.”  In a rambling, nearly combative discussion involving confusion over a woman that both Conchords think is hot for them, they’ve perfectly nailed Outkast’s combination of Paisley Park cheese-funk and dirty South hip hop.  Never mind that the woman’s lazy eye makes it impossible to know which Conchord is being given the eye, Bret and Jemaine have succeeded in paying tribute by first paying attention to the details of track production and vocal delivery.  The Rogers Nelson love shows up in a big way on the disc’s title track.  Now that I think of it, they’re throwing all sorts of light funk winks our way with their perfect falsettos, minimal guitar licks and sighing whispers; all that to describe several instances of freakiness that aren’t actually freaky, but more demented.

“Too Many Dicks (On The Dance Floor)” is all about the dilemma one faces when trying to hustle chicks at the disco, but there are only boys shaking their money makers that night.  This is The Conchords’ send up of modern party rap dance music, complete with electronically altered voices and faux Latin cowbell.  The song is not as fully developed as it could be, but the joke is no less amusing.

Paul Simon told us of 50 ways to leave your lover, but The Conchords sing of 50 ways they’ve been dumped on the tune “Carol Brown” (who took the bus out of town).  This song is not so much a stylistic tribute, but rather one that serves as a nod to the time-honored pop tradition of the broken heart.  Singers Alison Sudol (of A Fine Frenzy), Inara George (of The Bird and The Bee) and Sia serve as three of the voices of the girlfriends of the past, now organized into a choir that Jemaine is trying to get to shut up.

I don’t know what the future holds for Flight Of The Conchords, with them ruling out the idea of continuing their HBO series.  I completely understand that their creativity has been constrained by the production schedule for a show that’s filmed half a world away from their homes.  The concept would actually work better in a series of films and with the ongoing recording and touring projects, but only time will tell what they’ve got in mind.  I can tell you with certainty that I Told You I Was Freaky demonstrates intelligence and comprehensive knowledge of pop music history, while remaining laugh-your-ass-off funny.  This isn’t the record you’ll want to start with when introducing yourself to the band, however.  You should buy their debut first when attempting to get down with their sound.  As for future freakiness, I’m anxiously awaiting any other new ideas that Flight Of The Conchords plan to record.  If you’re a music buff like me, you’ll also feel that a fair amount of their jokes are leveled straight at you.