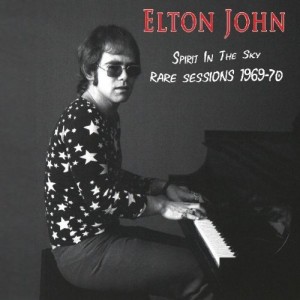 From the opening sweep of strings on “United We Stand” – the cut leading off Elton John’s Spirit In The Sky – there’s little doubt we’re back in the 1960s. It’s sunshine personified and stands in stark contrast to the brooding paranoia that would flow through soon-to-be classics such as “Madman Across The Water” just a couple years later. That would have to wait. Here, we have a portrait of the artist as a young man, paying homage to popular tunes of the day through a set of 10 cover songs. What shines most is the singer – John had serious range back in his young 20s, and you can hear the confidence in his voice throughout.

His selection of covers is hard to criticize: Choice cuts from Norman Greenbaum, Creedence Clearwater Revival, Badfinger and Cat Stevens all find a home here. The arrangements, however, are hit and miss. His take on Creedence’s “Travellin’ Band” pleasantly grooves, but John relies a bit too much on a guitar sound from the 1950s when he should have been looking to contemporaries like Eric Clapton, Jimi Hendrix or John Fogerty, himself, to forge new fires. John’s cover of another Creedence hit, “Up Around The Bend,” is far better, pent with the energy that made “Crocodile Rock” such a gas and much more in tune with Fogerty’s original vision. Cool drumming, too. Badfinger’s power-pop masterpiece “Come And Get It,” sounds like it was written for (or by) John to sing. “Love Of The Common People” has a sweet, reggae-like vibe, albeit with those strings again. “It’s All In The Game” has one of the longest and strangest histories in popular music, the tune being written originally by future Vice President of the United States Charles Dawes, and later set to lyrics by Carl Sigman in the 1950s. It’s been covered by the likes of Cliff Richard and Van Morrison; under John’s baton, it sounds like a lost Tom Jones recording. British outfit Christie took “Yellow River” up the U.K. Charts to #1 in 1970, and is another of the better covers here. Motown and Elton John aren’t usually synonymous, but that’s what we get with his version of “My Baby Loves Lovin’,” a soul-laced take on this bubblegum favorite. The closing “Lady D Arbanville” is the one song here that sounds like Elton John as most of us would know him. It’s the best cut on the disc, and could sit proudly next to “I Need You To Turn To,” “The Greatest Discovery” or other such earlier fare. But the covers would soon be out the door.

Among John’s remarkable and oft-forgotten accomplishments in the 1970s, including a string of albums and hits that kept him the king of the pop-rock castle for more than half a decade, was his total self-reliance. Along with lyricist Bernie Taupin, John was composing unforgettable piano parts to everything from “Your Song” and “Bennie And The Jets” to “Goodbye Yellow Brick Road” and “Philadelphia Freedom.” Just try and picture popular music without him. That he started, like everyone else, covering someone else’s tunes should give solace to budding songwriters.