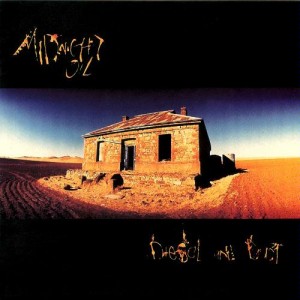 I was just starting my stint at the local college radio station in the mid-80s.  The wealth of music yet to be discovered in the “stacks” of vinyl scattered about the studio was damn near overwhelming.  Treasures were waiting to be brought into the light and on to the air and they were half-buried amongst the relatively unknown classic rock albums as well as the new releases.  While it was impossible for a very part-time, unpaid DJ to pick up on everything cool all at once, intriguing glimmers poked through in a rather random manner.  This is how I discovered Midnight Oil, a bristling post-punk ensemble from Sydney, Australia, that was just beginning to see their music released Stateside on Columbia Records.  I was somewhat familiar with the records 10, 9, 8, 7, 6, 5, 4, 3, 2, 1 and Red Sails In The Sunset, which both delivered their sonic cargo through an unusually adorned crate of angular guitar riffs, solidly connecting rhythms, and the striking figure and decidedly untrained voice of lead singer, Peter Garrett.  It was clear to me then that the band had something unique happening in their camp and that they were firmly committed to the brave approach of their music and the socio-political stance of their lyrical message.  But nothing prepared me for the overwhelming worldwide success that the band was to experience with 1987’s Diesel And Dust.  We always root for the underdog, but we really don’t expect them to win.

How many pop songs can you name that have a prominent trombone part?  Don’t strain yourself thinking about it for too long.  There’s one that anyone over the age of 30 knows and that’s the sole U.S. hit by Midnight Oil, “Beds Are Burning.”  Diesel And Dust’s lead track is a true pop song, but it’s as unlikely a hit as you’ll ever hear.  With singer Garrett’s nearly-spoken lyrics recommending the return of sacred aboriginal lands to the people that were removed from them over the course of Australian history, you wouldn’t think that the masses would be lining up to sing along.  The music track itself is not terribly complex and I believe it’s the simplicity that lends to its appeal.  Somehow, a song that could just as easily be sung while sitting around a campfire was transformed into a phenomenon by The Oils and producer Warne Livesey.

The band had a new understanding about how to deliver messages that are not typically swallowed with enthusiasm.  It’s going too far to say that the messages were candy coated as the lyrics remain thought provoking and include questions about humanity that are still not easily answered.  This holds true on “Put Down That Weapon,” a call for reason and multilateral nuclear disarmament.  Here again The Oils resist the temptation to aggressively position themselves in the faces of the unconverted.  The quiet approach and the key changes allude to something sinister lurking beneath the shrouded tail end of The Cold War.  The effect is used to an even greater degree on “Arctic World,” a slower piece employing primarily piano, acoustic guitar, and cello for instrumentation.  The lyrics here are as angry and condemning as anything presented on Diesel, but the words are sung as if Garrett has been beaten back into his cave of cynicism as he spews venom in the direction of world leaders that place profit before natural resources.

I don’t want you to think that Diesel is an album of alternating global funeral dirges and subversive ditties.  I mean, this is a band that was already well-established in Australia’s exciting surf/punk scene.  Rock they must and rock they do!  That’s how they begin side 2, with “The Dead Heart” and drummer Rob Hirst’s incessant pulse.  Guitarists Jim Moginie and Martin Rotsey do manage to add some tasty acoustic filigree to the chiming bell percussion and the persistent trombone, but this tune, sung from the point of view of any country’s native who holds more reverence for tribal tradition than the banner that happens to be currently flying from the nation’s flagpoles, is meant to physically stir a crowd.

“Whoah” is another slower number that examines the point at which a cult of personality approaches deity.  The object of Garrett’s concern could be Reagan, could be Thatcher, could be Kim Il Sung, but his song’s intent is clearly to shame us for believing a human can be infallible.  He carried this idea away with him as he delved further into Australian politics in his post-Oils career.  No longer the screaming radical outsider, he’s now determined to work for change from within as a more effective method of championing his liberal insights.  As just another person elected by the people to help work out the kinks of progress, he seems to have learned a lesson from the song himself.  Sensible politics does not automatically arrive if we’ve elected someone who appears to be our savior.  There might actually be some work involved with the position.

“Sell My Soul” is another song on the album worth mentioning.  There’s a near-industrial rhythm track beneath Garrett’s words identifying with someone who chooses to live life simply rather than contributing to the rise of mechanical anonymity.  Garrett’s vocals don’t conform to the pace of the music here and it’s a brilliant illustration of how the art of music is able to paint a meaningful picture.  Midnight Oil put quite a bit of thought into how they wanted to convey the strength supporting their beliefs.  “Sell My Soul” is likely the best example, though it was surely overlooked by those that only went so far as to hear “Beds Are Burning” on their radios.

Midnight Oil soldiered on for another 15 years before Garrett’s need to put his law degree to use by serving in the Australian House of Representatives brought the band’s tenure to a halt.  I couldn’t really say that their catalog contains any low points, but it is clear that their intensity subsided with age.  You could say the same thing about Eric Clapton, or Rush, or even Frank Black of The Pixies, but, as is true with those artists, Midnight Oil remained a band who continued to both intrigue and entertain us over the course of their 26 years in existence.  Diesel And Dust marks the onset of the mellowing, but it’s close enough chronologically to the fiercer, earlier stuff to capture our attention when observed from several angles.  It’s a true classic album and a great purchase for anyone looking to find some substance amid the pervasive plasticity of the 1980s.

One thought on “Midnight Oil – Diesel and Dust”