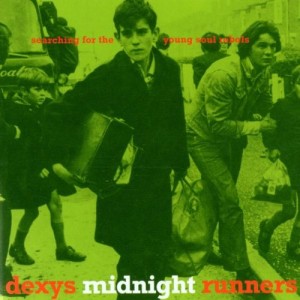 I know what you’re thinking –  ‘80s one-hit wonder.  But if that’s all you’re thinking, you’ve sold yourself short, music fan!  I welcome you to also perform a reappraisal of this band, just as I did.  What caused me to do so was hearing music from the first album released from a version of Dexys (the name they go by these days) in 27 years, 2012’s One Day I’m Going To Soar.  You’ll not find a more enjoyable adult pop record on the racks, let alone one released in the 21st century.  And as that album’s hooks wormed their way deep into my cranium, I began to wonder if my impression of this band had been horribly skewed by the five zillion times I’d heard “Come On Eileen” over the years.  Ashamedly, I admit it is so.

To properly understand what Dexys is all about, you have to learn about two essential elements of their sound – the voice of singer Kevin Rowland and the influence of Northern Soul music on young folks in the U.K.  Rowland, the only constant member in the band’s 36-year history, is also the band’s primary songwriter and a man capable of delivering the words with an unmistakable warbling croon that effortlessly dips down in smokier moments and rises to a falsetto when he’s clowning around.  This is his band, despite the contributions of guitarist Kevin Archer, who’d co-formed the outfit with Rowland.  But both men were seeking a sound that defied contemporary punk and pop standards, yet paid homage to the Northern Soul legends they’d heard play in their youth.  Northern Soul is not a term that means much to Americans, but it defined a music scene originating in 1960’s England that centered on just about any American R&B or soul acts that WERE NOT signed to the Motown label.  That influence can be heard in the music of Paul Weller, whether with The Jam, The Style Council, or his solo work, and also recordings by The Smiths, Pulp, and other similar, adventurous groups.  Though Dexys would alter their sound as time wore on, the influence of Northern Soul is felt most heavily on their debut record, 1980’s Searching For The Young Soul Rebels.  Hopefully that title makes more sense to you now that you know that Rowland and Archer were attempting to connect with an audience of like-minded young Brits.

Kevin Rowland was always sold on the idea that his band needed an image.  Aside from the strict practice and performance regimen (members were not allowed to drink or take drugs before or during performances), he also imposed his fashion sense.  Though we’re all familiar with the dungarees, unkempt hair, and bare feet from the video for “Come On Eileen,” that was actually two “looks” after the one used on the debut album, that of New York dock workers, with donkey jackets and wool hats.  I know, go figure!

But the look has never mattered squat to my appreciation of a band’s sound, so I dug in deeper and found that Soul Rebels is an album full of pop hooks and the meaty performances that present them.  Dexys’ sound was altogether different from what you think it was, too.  The violin-centered sound of “Eileen” was new for that record; Dexys used to have a kick-ass horn section in their original eight-piece line-up.  Not only that, but while we may think of them as a one-hit wonder here in The States, “Come On Eileen” was actually the band’s second number one single in the U.K.  The first, “Geno,” is on Soul Rebels, and it had served to prime England’s youth for a possible Dexys takeover.  Unfortunately, the band never managed another #1, but their albums are full of songs at least as good as the hits.

Beginning with a random scrolling through a series of sad, fuzzy radio stations, Soul Rebels soon afterwards gets down to business on “Burn It Down.”  Rowland and Archer know when to step back and let the band do some work, and that restraint works to great effect as organist Pete Saunders sets the mood while trombonist Big Jim Paterson, tenor sax player Jeff Blythe, and alto sax man Steve Spooner spray brassy honey.  Enough cannot be said about the skills of drummer Stoker, who also showed brilliant restraint with his tasteful fills and his concentration on the main responsibility of the person at the kit – keeping time.  The lineup was rounded out by longtime bassist Pete Williams, the keystone to a very sturdy foundation.  Rowland’s lyrics are excellent as he criticizes a fellow young rebel about throwing out the babies that are poets and novelists with the bathwater of today’s consumer-driven media output.  All to a danceable shuffle complete with trombone solo and breezy falsetto voice.

The sound stays consistent on “Tell Me When My Light Turns Green,” and the lyrics turn toward the unseen forces and people that are holding Rowland back from living his dream.  You know, shaking your fists towards “the man” and all that – typical angry young man fare, but sung through a soul filter.  “I’m Just Looking,” shakes things up in a different way, with softness, slowness and stabbing horns accentuating Rowland’s emotional croon.

Soul Rebels includes two hit singles: The aforementioned “Geno” and “There There My Dear” (peaking at  #7 in 1980).  Videos for both are tacked on to the EMI CD re-package from 2000, but they’re only playable through your PC.  Sorry Mac fans!  These are definitely worth watching to see how an 8-piece combo kicks it out on stage, and also to puzzle at Kevin Rowland’s bizarre, goose-stepping dance moves.

Soul Rebels also includes many a nod to the odd literary figure, beatnik, or jazz man, but Rowland’s poem, “Love Part One,” delivery spoken with spastic sax wailing away in the distance as the only accompaniment, tries to present a serious counterpoint to the serious fun had elsewhere on the record.  It baffled listeners with 1980 ears, but bare-assed as it is, it reveals the sensitivity and deep concern of a young man just finding his place in the world.  To think they’d thought about not including it in the first place!

I won’t prattle on about how you need to change your ways and get you some Dexys pronto, but I will say this:  Screaming guitars are not all there is in the world, though we love to hear them.  Hyperspeed delivery or disconnected prog noodling have their places as well.  But when you want to hear how a band crafts an original sound based on an older style without blatantly ripping it off, you can’t do better than Dexys.  And forget about Eileen.  She seems like a nice enough girl, but I’ve become a bit too familiar with her and so has the rest of the world.