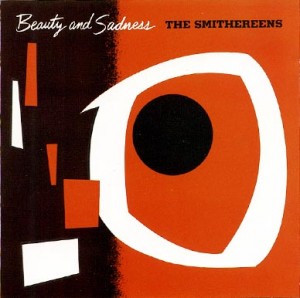 The Smithereens – Beauty and Sadness EP

One of my guiltiest pleasures while serving as Music Director for a college radio station in the mid-‘80s was the music of an outstanding quartet from Carteret, New Jersey, The Smithereens.  In 1986, their debut album, Especially For You, was released on the then-hot indie label, Enigma Records.  Overflowing with a new blend of power pop heavily influenced by The Beatles, with a muscular guitar sound and the rich, smoky voice of lead singer, Pat DiNizio, that record led to the incredible follow-up, 1988’s Green Thoughts.  While I did everything I could to wear out the promo copies of these releases, I do still own them, in playable condition.  So, the other day, while taking a spin through the tracks, which have held up extremely well over the decades, a feat that can’t be matched by too many of The Smithereens’ contemporaries, I remembered a mystery I’d once been unable to solve:  Where the hell is Beauty and Sadness?

Three years prior to releasing their debut album, the band cobbled together a four-song EP called Beauty and Sadness, which was subsequently released by Enigma.  My college radio station never received a copy, and I never saw one turn up at any of the record stores I frequented.  As my near-obsession with The Smithereens wore off, I all but forgot that I desperately wanted to hear and own that EP.  Flash forward to the Age of The Internet and my search was on once more.  The EP is readily available on CD, and in two different versions, no less.  The 1988 Enigma version preserves the EP’s original four-song running order, while a 1992 re-issue on Capitol (the label that gobbled Enigma) adds an instrumental version of the title cut.  Woohoo!  Success at last!  Let’s give a listen to the thing now that I’ve had a chance to let it sink on in.

If a band ever proudly wore their influences on their sleeves, it was The Smithereens on the cut “Beauty and Sadness.”  From the opening guitar strain which approximates “She Said, She Said” to the drum pattern that liberally borrows from “Ticket To Ride” and “Tomorrow Never Knows,” we might be fooled into thinking this four was also fab, then DiNizio’s pipes open up and we definitely know they are.  His warm baritone is infinitely appealing as he sings this tale of a forgotten love.  If there were no other songs on this EP, I’d still consider my purchase to be money well spent.  It forecasts the directions that the band would take on (at least) the majority of tracks recorded for Especially For You and Green Thoughts.  The remainder, though not as strong, are great filler pieces showing off the solid songwriting from DiNizio and the infectious background vocals courtesy of drummer Dennis Diken.

Track 2, “Some Other Guy,” is another love song, or rather a love gone wrong song, which incorporates jangly, Byrds-like guitars from the underrated Jim Babjak and effervescent bass playing from Mike Mesaros.  There’s always a film of regret and longing draped over Smithereens songs, with a hard-to-pinpoint “’60’s vibe” flowing underneath.  “Some Other Guy” thus falls right in line with so many other great tunes in The Smithereens’ catalog.  It’s followed up by “Tracey’s World,” which spreads out a bit more during its 4-minute length than the EP’s other songs are allowed.  DiNizio takes full advantage by using more time to describe the object of his obsession, blowing some tasty harmonica, and adding in a gut-wrenching, minor-key pre-chorus to keep us engaged.

The EP closes with a rather uncharacteristic track for the band in “Much Too Much.”  This song is rockabilly all the way, right down to the honky-tonk guitars and the gang-chanted background vocals.  Obviously, this was our heroes having a go at a style they didn’t intend to maintain, but the fun they had while putting the song together implies we may hear other “experiments” like this one when we least expect it.

And there you have it – the review of the EP that confounded me for over 25 years.  If you’re already a fan of The Smithereens, get this one written down on your “must have” list, if only so your collection is complete.  If you’re a passing Smithereens fan, you can let this one go as you won’t hear enough here to convert you to our cause.  And some advice to myself – get yourself some more damn Smithereens albums, man!  They’ve been relatively active all these years.  Though the highly animated Mike Mesaros is no longer with them, they’ve been releasing albums all the way up until 2011’s collection of new studio tracks, simply called 2011.  They’ve done collections of Beatles covers (two of them), their own version of Tommy, and even a Christmas album.  I’ve been missing out, but no more.