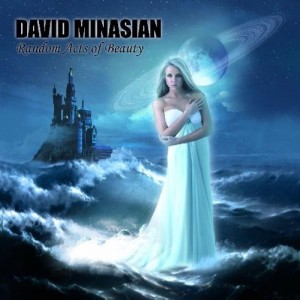 David Minasian‘s Random Acts Of Beauty is another reminder that when you least expect it, the cosmos will conspire to open your ears to music as if for the very first time. Yogi Berra might describe this disc of sensuous and melodic prog-rock as “deja vu all over again”; me, I couldn’t keep it out of my player. Multi-instrumentalist Minasian (plays everything from guitar and mellotron to cello and cornet) weaves an intoxicating web of old-school prog that harkens back to the best of the genre’s halcyon 1970’s era. Think Camel and albums such as The Snow Goose and Moonmadness, and you’ll have some taste of this album’s flavor. Minasian even brings in Camel guitarist/vocalist Andy Latimer to play and sing on opening track, “Masquerade.” But this isn’t some half-humped dromedary hoping to get by on its master’s laurels, Minasian (an accomplished video director) himself is a master of creating mood and capturing the atmosphere of times long past. Random‘s seven tracks flow with an epic sweep and grandeur that create the aural equivalent of a fantasy novel. My only complaint is that Minasian, and his 20-year-old son David, who joins dad and plays guitar on the bulk of the tracks, have set the bar so high with this that a follow-up will be tough.