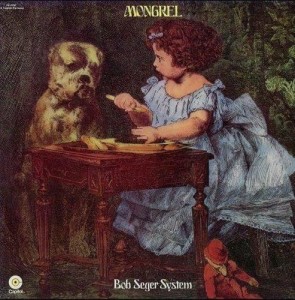 Years before the Silver Bullet Band came into being and Live Bullet catapulted to him national fame, Bob Seger was recording as the leader of the Bob Seger System. Most of Seger’s early works languished in obscurity – and really still do to the present – but they are far from throwaway, “completist-only” records. My personal favorite of the period is 1970’s Mongrel. You’ll find no radio hits on this platter but it remains Seger’s hardest rocking record ever, with an urgency that only his best live performances can top.

The cover art is unlike anything before or after that would grace Seger’s albums. The painting of a young girl at a table with a dog ostensibly sitting next to her has a certain Brothers Grimm-like quality – it doesn’t exactly scream Detroit rock and roll, but it is instantly recognizable. Mongrel‘s music, however, packs a huge Motor City wallop thanks to the groove laid down by Seger (lead guitars/vocals) and System members, Dan Honaker (bass/vocals/guitars), Dan Watson (organ/piano/vocals) and Pep Perrine (drums/percussion). Take the roughest and rawest parts of R&B, the grittiest soul, raw blues and combine with a heavy, thumping rock beat and you’ve got the blueprint – make that dogprint – for Mongrel.

Seger and System start with the roaring blues-rocker “Song To Rufus,” and it’s clear the boys are eager to attack. Perrine lays down a smashing beat that drives the tune at full throttle, while Seger delivers one of his rawest vocals ever. Listen to the fury of Perrine as he hits the crash cymbal! The minor-key “Evil Edna” features a terrific organ solo from Watson that borders on psychedelic. The insistent pound of “Highway Child” and the title track find Seger back at the top of the rock mountain. “Big River” is a gentle, acoustic-tinged number that sounds like a warm-up to his later ’70’s ballads that took over rock radio. And if a song ever reflected the “Detroit Sound,” it’s Side 1 closer, “Lucifer,” with its heavy organ chords, ripping guitar solos and background vocals. “Teachin’ Blues” sounds like Deep Purple channeled through the Motor City, while the gospel-soaked “Mongrel Too,” is a soulful number with a cool arrangement of hand drums, harpsichord-esque lines and rapturous backing vocals. A cover of “River Deep-Mountain High,” earlier made famous by Ike and Tina Turner, builds to a fevered – almost jam-ish – pitch before closing the record.

If you know Seger only from his late-70’s releases and can’t stand to hear “Night Moves” again, check out Mongrel. (Note: Mongrel was last issued on CD in 1993 and has long gone out of print. Expect to pay at least $25 for a decent used copy. Better yet, track down the vinyl. I found a copy in VG+ condition for $4.)