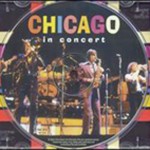 In the late 1960s and early ’70s – long before they fell into the smarmy trappings of Top 40 radio – Chicago was a very daring band and a very good band, prone to album-side experiments of near avant-garde rock. Along the way, they penned more than a couple handfuls of absolute classic rock tunes and cultivated a devout following, drawn to the band’s horn-driven sound and multi-talented lineup. And it’s the original “classic” lineup of seven – Robert Lamm, Peter Cetera, Terry Kath, James Pankow, Walter Parazaider, Lee Loughnane and Danny Seraphine – we hear on these collected live tracks. The bluesy “South California Purples” features Kath’s glorious outbursts of wah-wah drenched guitar. “25 Or 6 To 4” is another six-string highlight, with one of the great solos in rock guitar. Hearing Kath dance across the fingerboard, it’s little wonder he was so esteemed by Jimi Hendrix. The cover of “I’m A Man,” almost sounds like The Allman Brothers, a full-on blues-rock rocket ride. Cetera sings with a gritty soulfulness that belies the sappy balladeer he’d become two decades later, and drummer  Seraphine – one of rock’s most underrated stick men – turns in a formidable, cowbell-laced solo. “Questions 67 & 68” is a joyous melody sung sprung over horns, and the band’s first true hit. At more than 16 minutes, “Liberation” leaves plenty of room for each member to spread out. From Kath’s guitar antics and Cetera’s walking bass lines to Lamm’s keyboard vamps and Seraphine’s muscular drumming, this is a very different bird than the one that let loose “Hard Habit To Break.” Somewhere around the 10-minute mark, the music shifts from The Blues Brothers to the otherworldly flights of Ornette Coleman, with a barrage of effects, drippy organ notes and squealing horns. Just as the whole thing threatens to implode, the mood turns gentler and the tune carried to its soulful conclusion, with Kath channeling Otis Redding. That was Chicago – the real Chicago – back in the day.

One thought on “Chicago – Live In Concert”