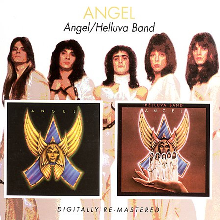 The Washington, D.C., hard-rock quintet Angel took its fair share of abuse from the music press back in the day. It’s not hard to see why: Big hair and matching white outfits gave the band a beefcake image, while critics wanted bundt cake. Fans, however, didn’t care. I count myself as one and find myself going back often to BGO Records’ two-fer reissue of Angel’s first two albums, Angel and Helluva Band. The self-titled debut is a forgotten hard rock classic and features a set of brooding min-pomp-rock epics. Vocalist Frank Dimino sings his lungs out, and guitarist Punky Meadows lays down fiery licks around Greg Giuffria‘s grandiose keyboard parts. Check out “Tower,” “Long Time” and “Mariner” to hear what all the hype was about.

Bit of trivia: Meadows was offered a job in Kiss in 1982 to replace Ace Frehley; Meadows declined.