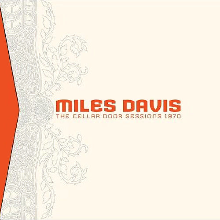 I know many jazz purists cringe remembering trumpeter Miles Davis‘ journeys into the unknown on his late 1960s and early ’70s albums. That period of Davis’ career is my favorite, however, and there’s a lot to explore from this period on the six-CD box set, The Cellar Door Sessions 1970.

During those four days, the group played 10 sets (two each on Wednesday and Thursday evening and three each on Friday and Saturday night), and only a fraction of that material had been previously released. The Cellar Door Sessions 1970 set lists don’t change much (four takes of “Inamorata” and “Honky Tonk” and five of “Directions” and “What I Say”), the songs never become stale. Davis never played a song the same way twice, and it’s the element of surprise and the trumpeter’s love of a challenge, particularly during this stage in his career, that makes his music so unpredictable and exciting.