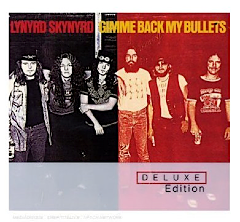 Gimme Back My Bullets represents something of a transitional album for Southern rockers Lynyrd Skynyrd. Guitarist Ed King had departed, and Skynyrd pared down to the twin-guitar attack of Gary Rossington and Allen Collins. The songs on Bullet are shorter slabs of blues-country-rock with some fine moments beyond the title track.

Ronnie Van Zant was one of rock music’s great lyricists, able to put his good ‘ol boy stamp on everything, with smarts that went far beyond the street. And who else in rock at the time was singing songs about the environment? His “All I Can Do Is Write About” could be an Earth Day theme song. “Double Trouble” is a self-effacing look at Van Zant’s brushes with the law and others, while “Every Mother’s Son” is a warning to those who didn’t follow his advice in “Simple Man.”

The Deluxe Edition of Gimme Back My Bullets tags six more songs onto the original album with four live cuts from 1975-1976, an acoustic take of “All I Can Do…” and an alternate “Double Trouble.” The bonus DVD features Skynyrd’s 1975 performance on The Old Grey Whistle Test and includes “Call Me The Breeze,” “Sweet Home Alabama” and “Free Bird.” This disc is superb; the band is tight; the video is razor sharp, and the performances legendary.

It’s a total time warp to watch footage of the audience members sitting and politely clapping after each song. The “rowdiest” moments come when a couple people raise a Confederate flag between numbers and just as quickly sit again. And instead of the “Are you ready to rock?!” rubes who couldn’t incite a riot at a European soccer match, Van Zant tells the crowd what an honor it is for the band to be playing in London. Those were the days.

It’s a thrill to watch Skynyrd in top form, especially Collins, who just can’t keep still, hopping from foot to foot through every bar of every song. The highlight is the absolutely searing version of “Free Bird,” which closes with Collins blazing through the final solo as if it’s his last, while Van Zant stands like an anchor, holding the ship in place. After the last chord is played and the band members slip behind the stage curtain, you’ll find yourself yelling “‘Free Bird’!” and meaning it.