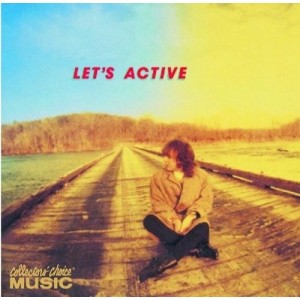 Before anyone had thought to generalize all unconventional rock artists by lumping their output into the non-descriptive category, “Alternative Music,” such music was termed “College Rock,” an equally non-descriptive term.  Yet the mid-80s saw a slew of styles peppering the airwaves of campus radio stations as listeners in those days were treated to a fantastic variety of groundbreaking recordings.  One exciting College Rock record released in 1986 on the I.R.S. label was the second full-length outing from Winston-Salem jangle-poppers, Let’s Active, Big Plans For Everybody.  Fronted by one of the producers responsible for early R.E.M. releases Chronic Town, Murmur, and Reckoning, Mitch Easter, Let’s Active had become an Easter solo vehicle following Let’s Active’s disintegration on their most recent tour.  This distillation of singular musical vision birthed a truly unique album that was sadly overlooked by the masses 24 years ago, yet will hopefully not be lost to collectors scouring the used vinyl bargain bins.

That Easter is responsible for the majority of the performances on Plans is illustrated by the stark album cover featuring Easter sitting alone and cross-legged on a wooden walkway and where possible water or light damage to the film has washed out the image to blend it with the faded autumnal colors of the trees in the distance.  Easter handles lead vocals on all cuts and also employs a wide range of guitar sounds, tape effects, and echoing treatments to fill in the space behind them.  His style draws heavily from many different approaches used by The Byrds and The Beatles and stirs in just a hint of synthesizer and piano.  His voice, thin and limited in range, is never the main focus as there are too many other interesting devices unleashed around it.  One example of this is found on Side 1’s “Talking To Myself,” with its Roger McGuinn-esque 12-string guitar opening, acoustic and electric guitar solos, swelling synthesizer, and busy drumming courtesy of Rob Ladd.  So much happens throughout the course of the track that we have no time to notice Easter’s shortcomings at the microphone.

Similarly, “Last Chance Town” opens with an attention grabbing, string bending, bluesy riff and strutting bass guitar and never lets go.  Through beat-keeping tambourine, stinging guitar and growling bass fills, and lushly overdubbed vocal harmonies, the song peers at Spiders From Mars glam from the comfort of Drive-In Studio.  Side 1’s closer, “Badger,” is an acoustic strummer with assistance from guitarist Angie Carlson and bassist Faye Hunter.  The song is somewhat amorphous, using Easter’s voice and immaculate electric leads to set the mood as the acoustic guitar keeps the pace.  Easter’s choice of phrases on which to layer vocal overdubs is odd, but helps to keep things unpredictable and alluring.

One of the record’s most intriguing pieces is side 2’s “Still Dark Out,” which is propelled by perfectly recorded bass guitar, “Kashmir” keyboards (courtesy of Carlson), and plenty of jangling, disconnected guitar lines.  There’s a subdued menace pervasive on “Dark,” but it’s constantly kept in check by Easter’s bright vocal melody.  The best is saved for last on the original 11-song vinyl release of Plans, however.  “Route 67” is a wild slide guitar workout set to live drums, drum samples, maracas, and rumbling bass.  The nearly wordless song gives Easter the chance to show off his prowess on a cut that would do Link Wray proud.

Big Plans For Everybody also includes songs that were better known “College Rock hits,” such as “Writing the Book Of Last Pages,” “In Little Ways,” and “Fell”, but their sing-song melodies do not reveal the glistening guts of what makes the record so great.  This is an album that you won’t want to pass up if you see it in the cut out bin and one you might actually want to track down if you’re looking for a prime example of what made college radio so great in the ‘80s.