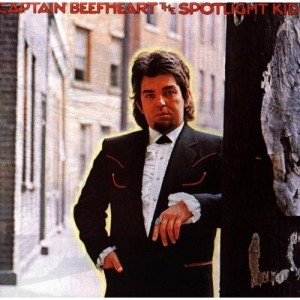 Christmas time usually means a bounty of new tunes for me and my fellow music-heads out there in Cyberville.  This year was no exception as one of my friends hooked me up with (nearly) the entire catalog from the newly departed Captain Beefheart (big thanks, Mike!).  I have to admit that although Mike and I share a big love for Frank Zappa’s music, I am not as familiar with the works of Frank’s sometime co-conspirator, Mr. Don Van Vliet.  That’s all changing now and I plan to offer up some of my thoughts on the Captain’s creations in the months to come.  We’ll kick it off with a study of Captain Beefheart’s 6th studio album, The Spotlight Kid.

From the first glimpse of the cover to The Spotlight Kid, featuring the Captain decked out in a Nudie suit and bathed in a yellow glow, we know we’re in for something different than the psychedelic stew presented in previous recordings such as Safe As Milk or Trout Mask Replica.  Likely the Captain was starting to feel the pressures from living his art to little financial return.  Somebody, whether the record label, the Captain, or both, decided that it was time to think about the commercial potential of Captain Beefheart’s records.  That being noted, Captain Beefheart’s ideas of what constitutes a hit record differed greatly with those of the record-buying public both today and upon The Spotlight Kid’s release, back in 1972.  There ain’t no chart-toppers here, but there is a marked embrace of more traditional song structure.

The shift in direction cannot really be credited to the musicians backing the Captain at this time.  Central figures, guitarists Zoot Horn Rollo (Bill Harkleroad) and Winged Eel Fingerling (Elliot Ingber), bassist Rockette Morton (Mark Boston), drummer/translator Drumbo (John French), and percussionist Ed Marimba (Art Tripp) are all present and in familiar form.  But the Captain’s disdain for his backing musicians, sometimes called His Magic Band, sometimes The Magic Band, is blatantly evident as they do not even receive co-billing on the record.  The Spotlight Kid is the work of Captain Beefheart, or so he wanted us to think.  Contributing to this opinion are the public condemnations of The Spotlight Kid by both Harkleroad and French.  Clearly the shift in focus was instigated from outside the band.

So we’re left with a product that didn’t fully satisfy the musicians involved in the project and never converted the masses as the record label had hoped.  But is the music any good?  Damn straight!  It’s great!  The lurking menace of the opening track, “I’m Gonna Booglarize You Baby,” with its funked-up guitar lines and its creeping, stabbing bass, sets the stage. The Captain, describing his intentions to do something other than steal the family’s fine china, rises above the music sporadically as if to make sure that the squad car kept on driving past his hideout in the alley.  Once in the clear, he’s back at work gravelly pondering aloud and barking like a guard dog.

The low-key approach used on “Booglarize” definitely dominates the record, but there’s a telltale moment where I think the Captain is forecasting his interpretation of “commercial music.”  The instrumental “Alice In Blunderland” sounds very much like a lost Zappa track, with the dominant marimba and a very Zappa-esque guitar solo.  Perhaps the Captain (or his record label) thought that if Frank can sell millions of records, the Captain ought to be able to do the same.  I mean, they’re both weirdos, right?

“Blunderland” is an aberration on Spotlight, however.  More evident are the Captain’s attempts to translate sounds into music – or create music that duplicates sounds.  The prime example of this can be heard on “Click Clack,” which successfully approximates a train firing up the engine and rolling on down the line.  This would be a blues number if not for the 6/8 timing (which somehow mutates into a quick 4/4).  The Captain contributes wailing harmonica to great effect and as a compliment to the increasingly frantic guitar riffs.  “Click Clack” is followed up by one of the Captain’s better known songs, “Grow Fins,” a tale about giving up on all the females of the human species in favor of getting it on with a mermaid.  “Fins” should always be well-remembered as it contains some of Beefheart’s best harp playing and most visual lyrics.

Another song worth mentioning is the demented blues of “There Ain’t No Santa Claus On The Evening Stage.”  Beginning with the captain’s sly rattle of jingle bells and peppered with harmonica fills and the laconic wail of guitars, the “ho ho ho ho ho ho-oh oh oh” outro is well worth the price of admission alone.  It’s the Captain doing what he does best – filtering the blues through the battered colander of his brain.  The record then closes out with “Glider” and the substitution of session drummer Rhys Clark for the ever-capable French.  The vibe is altogether different without French, but the song is an example of what the Captain wanted to accomplish with Kid by “adding more beats.”  “Glider” is also another attempt at a recognizable blues style which succeeds better than most of the other cuts featured here.

Longtime Beefheart fans may have advised me to start my journey into the Captain’s crypt with something other than this record, but I’m glad I ignored that advice.  The Spotlight Kid is an excellent album when taken on its own merits and apart from it being framed with the rest of the Captain’s catalog.  It’s easy to see why the record failed when used as a tool to leverage more money from the wallets of teenagers in the early ’70s.  It’s far too experimental, despite the move to scale back the weirdness.  But it holds up bravely as an example of a unique artist trying something different while floundering in his career.  Captain Beefheart may be gone from this world, but he’ll always be the strange kid standing in a spotlight of infamy and wondering why not enough people liked the suit he was wearing.