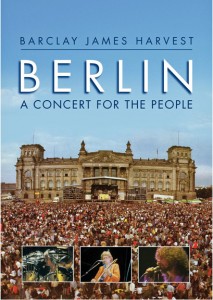 Barclay James Harvest are among the dozens of bands from the 1970s who never really got their due outside of Europe. The group’s blend of pastoral and atmospheric music would surely appeal to fans of The Beatles, Moody Blues and Nektar, and even folk-rock groups such as America, yet the original BJH foursome of John Lees (guitars/vocals), Les Holroyd (bass/vocals), “Wooly” Wolstenholme (keyboards/vocals) and Mel Pritchard (drums) found the big break across the pond elusive. Thus, it’s great to see an appreciative West German crowd of some 200,000 fans flock to the lawn of Berlin’s parliament building, the Reichstag, for a free show staged August 30, 1980. This and an additional 5-song promo film from 1975 comprise the excellent DVD, Barclay James Harvest – A Concert For The People.

By 1980 Wolstenholme had departed for a solo career, so the focus narrows to the trio of Lees, Holroyd and Pritchard, with Colin Browne and Kevin McAlea filling in on keyboards and adding other instrumental flourishes. Lees and Holroyd are both fantastic singers on their own, but it’s when they harmonize that the real magic happens. And Lees proves to be one of rock’s most lyrical players, his guitar lines seem to “sing” as much as any other description I can conjure. Barclay James Harvest was not a singles band, but several of their hits are featured including “Mockingbird,” “Child Of The Universe” and “Hymn.” It’s interesting, too, that beyond the topical nature of tunes like “Child Of The Universe,” how allegorical if not explicitly religious some of the band’s songs are. Certainly “Hymn,” with lines like, “Jesus came down from Heaven to earth/The people said it was a virgin birth,” might seem to alienate a giant crowd of music lovers, but the Berlin audience seems enraptured.

However, the best is yet to come. The bonus promo film featuring 5 songs from Barclay’s 1975 album, Time Honoured Ghosts, is superb. Each song – “Jonathan,” “Titles,” “Moongirl,” “One Night” and “Beyond The Grave” – is appended with suitably dreamy, nostalgic, mysterious and affirming footage. The five tracks are as strong as any the band ever did, and I’m still humming the melody to the Beatles-influenced “Titles” weeks after seeing the for the first time, and definitely not the last. Great in surround, too. Check it out!